A scientist figured out how to get data from farts, and it could save lives. 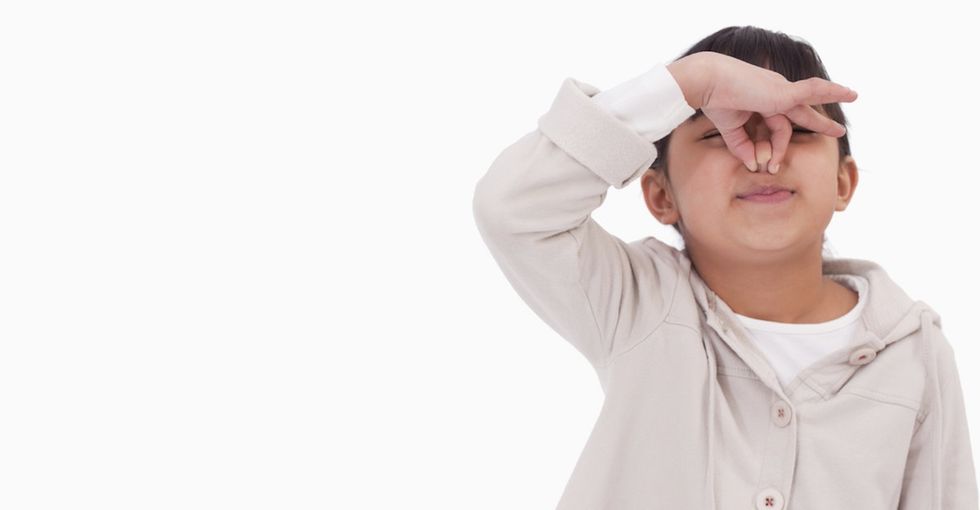 It's probably the most common question that follows an untimely (or, timely, depending on who you're with) bout of flatulence.

I'm talking about farting, people. Letting one rip. Making a stink. Going "Insane in the Methane."

Though we've given a nickname to each and every one of their many variations — the "squeaker," the "SBD," the "Dutch oven" — and used them as the punchline to many a juvenile joke, the only thing more discomforting than a fart itself is how little we actually know about them.

Some experts will tell you that the old one cheek sneak is a sign of healthy gut microbes. Others will say that it could be an early indicator of a much more serious stomach problem, like inflammatory bowel disease or even colon cancer. I'm pretty sure that not letting them go causes spontaneous combustion, but what are we supposed to think?! If only there were someone who could settle this debate once and for all!

Thankfully, there is one man who thinks he has found a cure for our wind-breaking woes.

His name is Peter Gibson, and he's the professor and director of fartology — which I've learned is technically called "gastroenterology" —at the Alfred Centre and Monash University in Australia.

Over the past few years, Professor Gibson has been working tirelessly to create a device capable of measuring our gas at each stage of digestion.

“What comes out of the backside only tells us about the last 20cm of the gut,” Gibson said to BBC. “We know bits and pieces about it, but it’s been very difficult to get to the crux of what is happening."

Recently, Gibson's team had a breakthrough in the form of a tiny, swallowable, high-tech capsule that tracks your gas as it passes through your system.

Think of it as a "fart monitor," if you will.

Wired to provide real-time measurements of our bowels, Gibson's capsule takes samples of gas at regular intervals in the digestive system.

The capsule then relays its readings to a tablet computer. It's also affixed with a sensor to evaluate other key factors about the gut, like ambient temperature and acidity (which especially comes in handy when the capsule is nearing the end of its Magic School Bus-esque journey).

“You want to know if it’s passed out of the backside, but you wouldn’t know because it’s just part of the stool,” Gibson explained. “When the temperature falls, that’s when it’s gone outside.”

Gibson has already begun testing his pill device on pigs and is hoping to begin human trials in the next few months.

If all goes according to plan, Gibson and his team will be able to use the information taken from these trials to create (I'm not joking here) a "fart library" of data that could determine the makeup of gases related to different lifestyles and diseases down the line, more accurately measuring the effects of different treatments for these diseases.

The gases we produce can tell us a lot about the state of our stomachs.

How we digest food is not only a matter of our differing diets and metabolisms, but also a matter of gene development as well. When the microbes in our intestines become irritated or otherwise harmed, they can release excess gases that not only cause discomfort, but also serve as precursors to other health problems.

For example, too much hydrogen and methane in your farts could mean you have problems with digesting carbs. Too much methane could be the cause of your constipation. Excess hydrogen sulphide (aka the stink in our stink bombs) could signal that the lining of your gut has become damaged.

Basically, our farts are like snowflakes — unique and individual to us all. And a change in their odor could be a cause for concern.

So I say bravo to Gibson and his team for rolling their sleeves up and doing the dirty work required to ensure our future well-being. May his findings truly cause a stink in the gastrointestinal scientific community.

Now if only there was a similar capsule that could actually convince the people around us that it really was the dog's fault...