A little boy had a book read to him by an astronaut in space, and so can you. 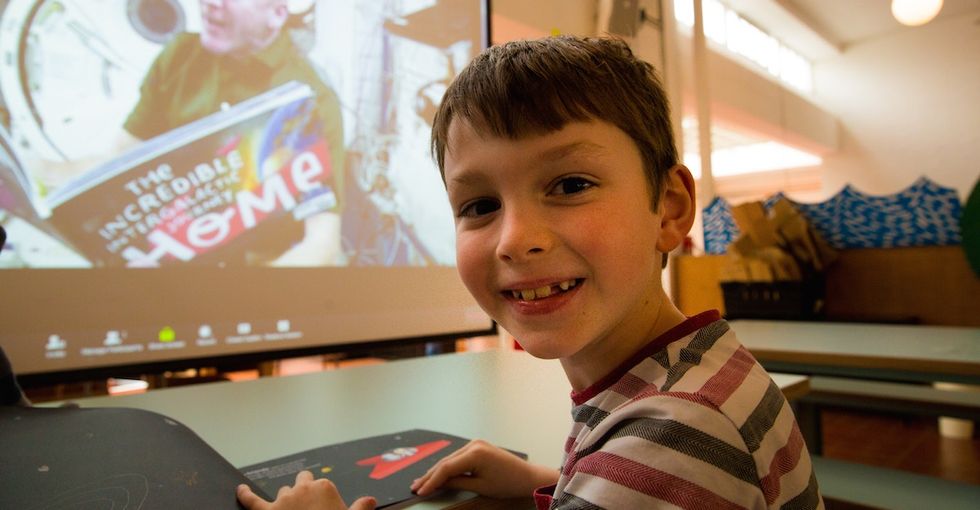 8-year-old Roraigh has always loved space and reading, which is why he entered a contest to have an astronaut read him a bedtime story from space.

Like most good stories, Roraigh's starts with an ordinary kid who was suddenly whisked away on a fantastic adventure.

Photo by Lost My Name, used with permission.

Roraigh's dream is to visit Pluto because it hasn't been explored yet, and he's currently in the middle of reading the Harry Potter series (so don't spoil it for him).

So it only made sense for him to apply to the contest held by U.K. book publisher Lost My Name — a contest that promised an experience he'd never forget.

To his disbelief, Roraigh won the contest! He suddenly found himself at the Kennedy Space Center in Titusville, Florida, watching an International Space Station rocket launch.

Also on that rocket? A kid's picture book ... about Roraigh.

Lost My Name specializes in personalized children's books. Not only are they super cool, but the publishers say they're proven to help kids better engage with reading.

When Roraigh's book finally arrived aboard the ISS, British astronaut Tim Peake recorded a video of himself reading the book to Roraigh. Then he beamed it back down to Earth, where Roraigh has watched it again and again and again.

Photo by Lost My Name, used with permission.

"It was really cool, a real-life astronaut reading a book to you, from space!" Roraigh told Upworthy.

OK, so not every kid gets to watch as a book about him is launched into space.

But now every kid can listen to an astronaut read them one of their own favorite stories, just like Roraigh.

It's all part of a nonprofit program called Story Time From Space.

Photo by NASA via Getty Images.

Founded by Patricia Tribe, a former education director at Space Center Houston, Story Time From Space launches space-related books like "Mousetronaut Goes to Mars" or "The Wizard Who Saved the World" into orbit, where they're read aloud by real-life astronauts, recorded, and sent back to Earth. The astronauts also conduct fun science experiments relevant to the reading.

The videos are posted online for all to see so kids can follow along with a story before bed or in the classroom, all in the name of getting more children excited about STEM (science, technology, engineering, and math).

Photo by Story Time From Space/YouTube.

And if you don't believe that's an important goal, maybe this'll convince you: Story Time From Space has its own official mission page on NASA's website!

Studies show U.S. students have been hovering around the middle of the world's pack in math and science aptitude for years.

That's a bit of a bummer for the future of awesome things like space exploration, engineering, and medicine.

But the power of a good story? That won't be going away anytime soon.

The people behind Story Time From Space realized early on that watching an astronaut reading a real, hard-copy book while floating around the ISS, with the Earth glowing hundreds of miles away in the background, would be a powerful experience for many kids.

"I decided that it would be a good idea to have astronauts reading from space combining literature and science, because one should complement the other," Tribe told The Toronto Star.

After all, it's like the nonprofit's slogan says: "What you cannot imagine, you cannot do."

Right now, Roraigh's book is still rocketing through space at over 17,000 mph.

One day, it'll return home along with several other books like it that have been read to the children of Earth.

Since his experience with Story Time From Space, Roraigh said he's been given "loads of space books" from friends and relatives, and that he's excited to keep learning about the planets and how they formed.

You can watch astronaut Tim Peake read Roraigh's book in the video below, or check out the full Story Time From Space video library.

Keep Reading Show less
safety
Get stories worth sharing delivered to your inbox
By signing up you agree to Upworthy's privacy policy.
Trending Stories
uplifting
Heroes