A husband caring for his sick wife and 3 other stories on what caregiving is really like. 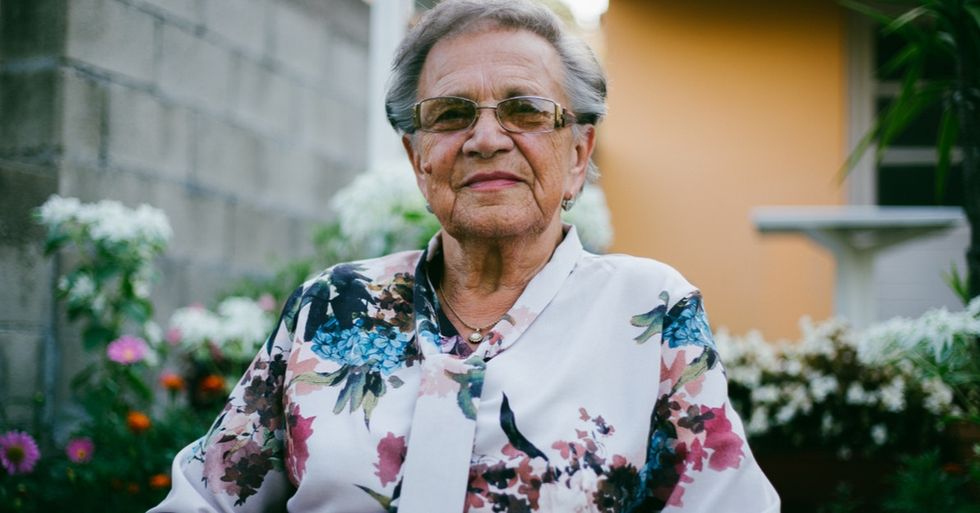 Being a caregiver is one of the hardest jobs in the world.

Whether it's your profession, calling, or you're rising to the challenge for a loved one, there's no denying that taking care of another person full-time is an important and often unsung job. The work is mainly done behind-the-scenes, and as many caregivers will take you, most people don't take the time to ask "How are you?" or "Is there something I can do for you?" They see caregivers as unflappable. That means the humanity is sometimes a little lost.

But what's it really like to be a full-time caregiver? That's a question best answered by the people who've been there working tirelessly to make someone else's life more manageable and all around better.

We asked four people about the challenges, the rewards, and what they've learned. Here's what they want the world to know.

Taking care of her grandmother taught MaryEllen to see her family and herself in a new light.

When MaryEllen was 25, her grandmother's health began to decline. So MaryEllen moved in so she could take care of her during the day and work outside the home at night. She made sure her grandmother took her medication, drove her to appointments, cooked for her, and made sure that she stuck to her low-sodium diet.

All aspects of her caregiving job were difficult, but for MaryEllen, the hardest thing was taking care of someone who had taken care of her when she was young. "I saw her as more than just my Nana, but as the smart woman who was slowly losing her independence," says MaryEllen.

However, MaryEllen found a great way to deal with these feelings — humor. "Nana was fond of saying inappropriate things. When it's really hard, you just have to laugh."

Though caring for her grandmother was tiring — even with her mother and aunts helping — it gave MaryEllen a new perspective. "Caring for someone is the hardest best thing you can do. I got to know my nana beyond her role as a mother, wife, and grandmother. I got to see my mom in a different light: as a daughter losing her mother." And MaryEllen's mother, MaryEllen says, started seeing her as an adult.

Most importantly, caring for her grandma gave MaryEllen strength. "I discovered a new respect for myself," she says.

Mia is the parent of two special-needs girls. Taking care of them taught her to take care of herself, too.

When her twin daughters were born prematurely, Mia's life changed forever. Her daughters, who are now two, live with cardiac and pulmonary problems. Even though all moms are expected to be on 24/7, this was something completely different.

"Caregiving is relentless and the tasks are never-ending," writes Mia in an email. "It's cliche to say that caregivers forget to take care of themselves but it is really true."

While Mia believes that the caregiving she does has endowed her with leadership skills that help her advocate for both herself and her children, she stresses that in order to be effective, she needs to practice self-care.

"Make a special effort to do something just for you and hold onto that for dear life," she writes. "This can be a hobby or a career — it's so important that you have an outlet that has little to do with your caregiving responsibilities."

That means going above and beyond to protect her energy as much as possible. Mia stresses getting enough sleep (a priority that often gets overlooked), eating good, healthy food, and moving around. But perhaps most importantly, she says you shouldn't be afraid to lean on your support network.

"Be fastidious in caregiving for yourself and it will reap rewards in your ability to care for others," she notes.

Taking care of her step-father taught Nora about a strength she didn't know she had.

Nora became the primary caregiver for her step-father, Antonio, after he suffered a stroke in 2016. It was a role she hadn't planned to take on, so at first she struggled in ways she'd never known before.

"I remember the first holiday when I was left alone at home with him and my mom, I would cry over everything," writes Nora in an email. She'd been given crash courses in how to feed and clean her step-dad when he'd left the hospital, but she was in such a state of shock that she couldn't remember any of it.

"I felt like I was carrying the weight of the world on my shoulders."

Caring for her parent meant Nora had to choose between helping him and taking on other work. While she and her mother have additional caregivers helping them, Nora bears much of the responsibility. She cooks for her step-dad, keeps him company, and makes sure that he's safe and comfortable. Unsurprisingly, she sometimes experiences a great deal of stress and burnout. However, after two years into it, she's also thriving.

"I've stopped struggling with all the new information I've had to take in: I can change diapers, I can clean a person, I can do many things that never in my life I thought I could do," says Nora. "I appreciate how grateful my stepdad is for my work, however hard and frustrating some days are."

If there's one thing Nora wants others to know about the difficult job that so many do around the world it's that caregivers need support, too. Sometimes just a "thanks" can help.

"If you know a caregiver, ask them how they are, because it can be a really hard, thankless, and lonely job," she says. "Give praise, thank caregivers, and most of all, think about the fact that maybe one day you will need people who care for you as well. It is more common than what you believe."

Ben saw his role as a full-time caregiver as "bad casting" at first. Now he knows that "love conquers all."

In 2015, Ben took his wife to the ER after she complained of severe abdominal pain. Tests revealed that she had an inoperable abdominal tumor. While aggressive therapy ultimately destroyed the tumor, that wasn't the end of Elizabeth's health problems. Right when she started feeling good again, she developed a back problem that's left her immobilized ever since. Treatment hasn't helped.

"I often have to help her get out of a chair and walk her to wherever she needs to go, and be ready twenty-four hours a day," writes Ben in an email. "Until a few months ago, Elizabeth couldn't even lie in bed — she had to sleep in her leather chair."

While both Ben and his wife are confident she'll get better, for now, she depends on him to get through the day. The couple has been together for 50 years, but Ben's found that his new role has taught him some important life lessons.

"The real stuff I've learned and continue to learn is about myself. My selfishness and ability to shut out another's discomfort when I want to are taking some big hits," he writes. "When I say that Elizabeth is the center of my life it is simply a statement of fact."

"I have to do nearly everything. This is exhausting but one does what is necessary, lazy and selfish or not. Caregiving to a beloved who is incapacitated is a real act of selfless love"

Ben has some advice for anyone who finds themselves in the position of becoming a primary caregiver to your partner: "Remember all your spouse means to you, all she/he has done for you and how much you have benefited from the relationship. You will be a better person from the experience."

No two caregivers do the same job. Each of their stories are unique. It's important to realize, though, that no matter the details, the work these people do is always invaluable.

Provide care around the clock is not easy, but as these stories illustrate, realizing the difference you're making in someone else's life is worth the challenge.

Yuri has a very important message for his co-workers.

While every person with autism spectrum disorder (ASD) is different, there are some common communication traits that everyone should understand. Many with ASD process language literally and have a hard time understanding body language, social cues, exaggeration and cultural cues.

This can lead to misunderstandings that result in people with ASD appearing to be rude when it wasn't their intent. If more neurotypical people (those without ASD) better understood these communication differences, it’d be much easier for everyone to get along.

A perfect example of this problem and how to fix it was shared by Yuri, a transmasc person who goes by he/they, who posts on TikTok about having ADHD and ASD. In a post that has more than 2.3 million views, Yuri claims he was “booked for a disciplinary meeting for being a bad communicator.”