A homeless dad needed help. The Internet stepped up to give it to him.

"I love you all. You're like family to me right now." 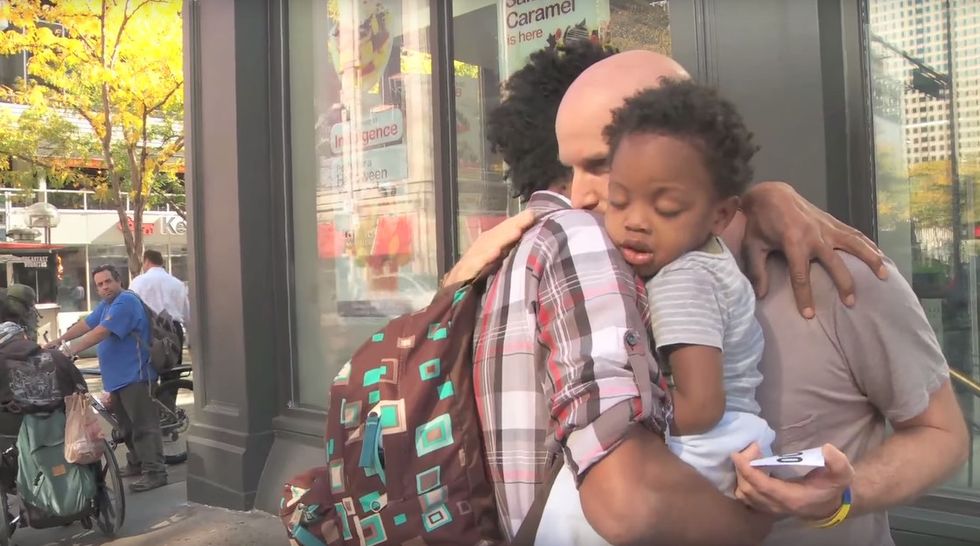 You may have seen this story about a single father who became homeless by a twist of fate after moving his 2-year-old son halfway across the country for a better life.

James lined up a job and housing before the move, but upon landing in Denver, he got the unexpected news that his housing had fallen through. He had nowhere to live.

After moving halfway across the country to provide for his son, James was suddenly unable to provide one of the most basic necessities.

He told his story to philanthropist and motivational speaker Leon Logothetis, who met James during his #GoBeKind campaign, which he created to provoke a chain of kind acts across the country.

The video of James' story quickly made its way onto major news sites, including The Huffington Post, FOX 31, and ABC 7. It was clear in the video how much Leon's gift — a $1,000 Visa gift card and a week's stay at a local hotel — touched the single father.

But the kindness of one stranger was just the beginning for James and his son.

A month after this moment of kindness, James found himself still struggling. Because of the long wait to get into Denver day cares, James has to take his son with him to his job as a barber. He also had no reliable transportation for them from the homeless shelter where they're staying.

So a friend of James' who knew his predicament set up a page on GoFundMe to raise money for a reliable car. She set the goal at $20,000, hoping to collect at least enough donations to help in some way.

When he first received the news about the campaign, James was so floored by the generosity of strangers that he made a video to thank everyone who showed him and his son kindness.

"I never thought a small act of kindness like that would spark such a huge chain reaction."

At time of writing, the total is about $47,000 after about a week. James made the thank-you video after he saw the page when it was at just $6,000. Imagine how he'll react when he sees it now!

( The page is still live right here if you want to check it out!)

You can see his full thank-you video here (that's where this GIF is from).

But who is Leon, who started this kindness "chain reaction"?

Leon, who created the video about James' story, is a former London broker turned philanthropist/writer/motivational speaker. Ever since he quit his corporate life in search of one with purpose and hope, Leon's been traveling the globe to celebrate human connection and doing good.

"People often ask me if it's hard to find kindness and the answer is a resounding no," he told the Huffington Post in a recent interview. "It's amazing how when we just scratch the surface kindness comes bubbling up."

You can keep the kindness-fest going.

You don't need a $1,000 gift card to share an act of kindness. Leon's #GoBeKind campaign shares stories like James' to inspire us to show someone kindness in our own way.

Go show someone a little kindness. They may need it more than you know.