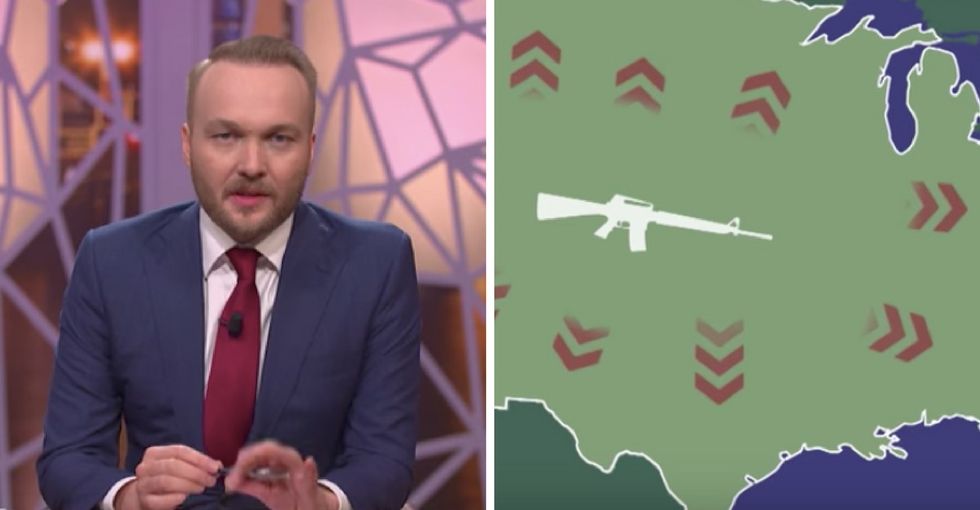 Americans are helplessly, desperately "addicted" to guns. Or so a new Dutch comedy show has suggested.

“Sunday with Lubach,” a news satire series hosted by comedian Arjen Lubach, panned Americans in a recent sketch that encouraged Europeans to be more sympathetic to our "Nonsensical Rifle Addiction," or NRA.

"NRA is a constitutional disorder caused by a dysfunction of the pre-frontal second amendment in the nonsensical cortex, causing patients to shoot people," the ironically somber narrator jabs to laughs.


GIF via "Sunday with Lubach"/YouTube.

"NRA is highly contagious," the video continues. "Parents often pass it on to their children. This happens automatically or semi-automatically."

Sure, the sketch is clever and deserving of a few not-funny-haha-but-funny-sad laughs as it drives a serious point home, in the wake of yet another mass shooting.

But is its basic premise — Americans' fanaticism over guns — a fair assessment?

America's gun problems don't stem from an "addiction." They stem from a breakdown of democracy.

Yes, Americans, as a whole, own a lot of guns. Like, there are more guns in the U.S. than there are people. But parse through the big picture data, and the numbers may surprise you. Just 3% of Americans own 50% — half! — of all the country's guns. And the vast majority of Americans — a whopping 78% — don't own any at all. In fact, nationally, gun ownership has been on a slow and steady decline since the early 1990s.

"Addiction"? Not so much.

Most Americans, including gun owners, overwhelmingly support common sense gun regulations — laws that have failed time and time again to pass through a GOP-controlled House and Senate. It's not that Congressional Republicans aren't listening to their constituents, per se; they're just more concerned with fundraising their re-election bids. During the 2016 campaigns, for example, the actual NRA (the National Rifle Association, not to be confused with Nonsensical Rifle Addiction) poured tens of millions of dollars into political races around the country, including over $30 million toward then-candidate Donald Trump.

America doesn't have an "addiction" problem when it comes to guns — it's got a "democracy" one.