A beautiful letter from Ronald Reagan to his son in '71 is decades ahead of its time in tackling toxic masculinity. 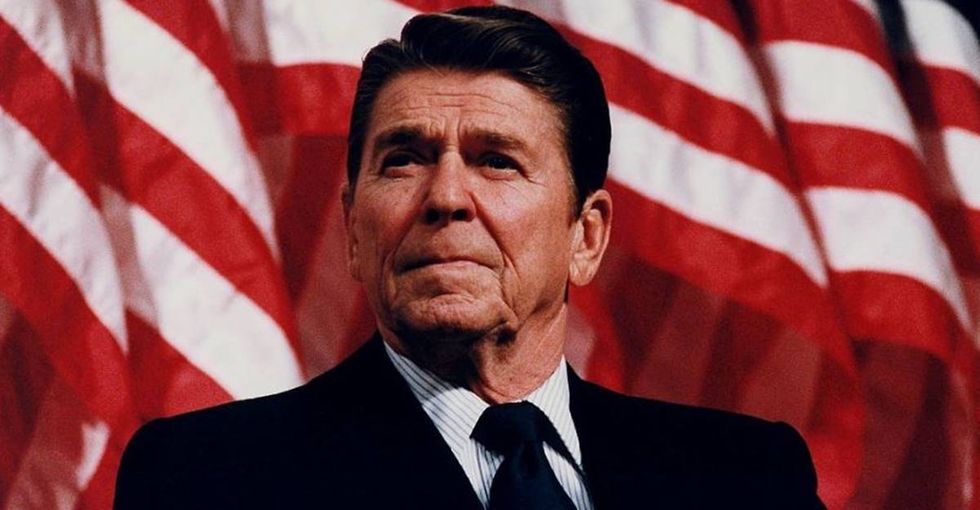 The modern American conservative movement was born sometime around 1980 with the Reagan Revolution. While running for president in 2008, Barack Obama perfectly summed up how Ronald Reagan forever altered America’s political climate:

I think they felt like with all the excesses of the 1960s and 1970s and government had grown and grown but there wasn't much sense of accountability in terms of how it was operating. I think that people... he just tapped into what people were already feeling, which was we want clarity, we want optimism, we want a return to that sense of dynamism and entrepreneurship that had been missing.

However, since Donald Trump arrived on the political scene, the Republican Party has changed so fundamentally in message, tone, and policy, that it bares little resemblance to what was known for four decades as the Party of Reagan.

Many of Trump’s policies stand in direct conflict with those of Reagan, including: relationships with allies, trade policy, immigration, gun control, friendliness with Russia, and freedom of the press.

On a personal level, Reagan’s cool, sunny optimism — deemed by many of his detractors as aloofness and naivete — stands in direct contrast with Trump’s petulance.

The Republican Party’s embrace of Trump, even after he was caught on tape bragging about how he grabbed “women by the pussy” against their will, marked a 180-turn from Reagan who said that politics and morality, derived from religion, were “inseparable.”

In 1971, Reagan wrote a letter to his 26-year-old son, Michael, on the eve of his wedding, and it's a perfect example of how he viewed women differently than Trump.

In the letter, Reagan calls out men who brag about sexual conquests outside of their marriages. He refers to this type of talk disparagingly as “locker-room stories” a phase similar to the one conservatives would use to excuse Trump’s rape-brags.

Some men feel their masculinity can only be proven if they play out in their own life all the locker-room stories, smugly confident that what a wife doesn't know won't hurt her. The truth is, somehow, way down inside, without her ever finding lipstick on the collar or catching a man in the flimsy excuse of where he was till three A.M., a wife does know, and with that knowing, some of the magic of this relationship disappears.

The letter is also a great example of why Reagan was known as the “Great Communicator.” It’s a tender letter about the importance of being true to your spouse and a warning against falling into the temptation of equating masculinity with sexual conquests.

Enclosed is the item I mentioned (with which goes a torn up IOU). I could stop here but I won't.

You've heard all the jokes that have been rousted around by all the "unhappy marrieds" and cynics. Now, in case no one has suggested it, there is another viewpoint. You have entered into the most meaningful relationship there is in all human life. It can be whatever you decide to make it.

Some men feel their masculinity can only be proven if they play out in their own life all the locker-room stories, smugly confident that what a wife doesn't know won't hurt her. The truth is, somehow, way down inside, without her ever finding lipstick on the collar or catching a man in the flimsy excuse of where he was till three A.M., a wife does know, and with that knowing, some of the magic of this relationship disappears.

There are more men griping about marriage who kicked the whole thing away themselves than there can ever be wives deserving of blame. There is an old law of physics that you can only get out of a thing as much as you put in it. The man who puts into the marriage only half of what he owns will get that out.

Sure, there will be moments when you will see someone or think back to an earlier time and you will be challenged to see if you can still make the grade, but let me tell you how really great is the challenge of proving your masculinity and charm with one woman for the rest of your life.

Any man can find a twerp here and there who will go along with cheating, and it doesn't take all that much manhood. It does take quite a man to remain attractive and to be loved by a woman who has heard him snore, seen him unshaven, tended him while he was sick and washed his dirty underwear. Do that and keep her still feeling a warm glow and you will know some very beautiful music.

If you truly love a girl, you shouldn't ever want her to feel, when she sees you greet a secretary or a girl you both know, that humiliation of wondering if she was someone who caused you to be late coming home, nor should you want any other woman to be able to meet your wife and know she was smiling behind her eyes as she looked at her, the woman you love, remembering this was the woman you rejected even momentarily for her favors.

Mike, you know better than many what an unhappy home is and what it can do to others. Now you have a chance to make it come out the way it should. There is no greater happiness for a man than approaching a door at the end of a day knowing someone on the other side of that door is waiting for the sound of his footsteps.

P.S. You'll never get in trouble if you say "I love you" at least once a day.