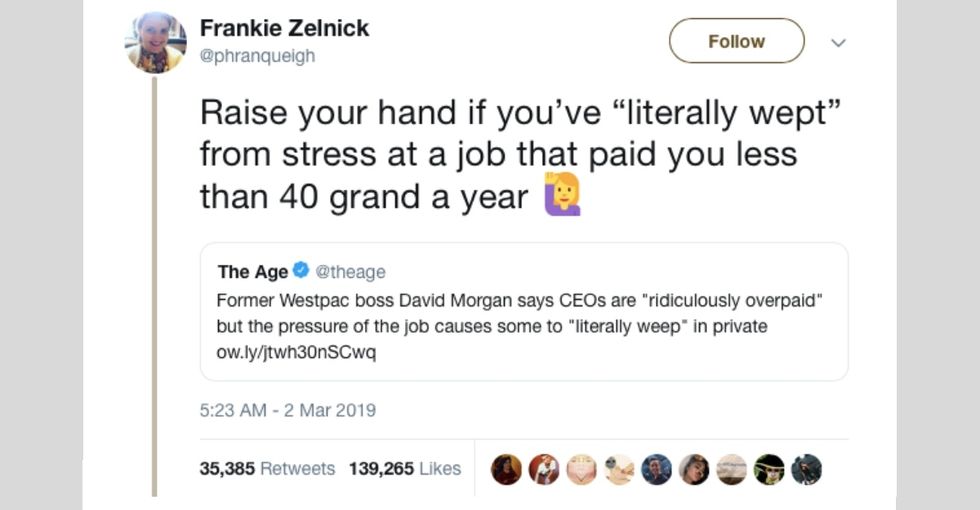 A former bank boss tried to justify inflated CEO salaries because the job is stressful. The people of Twitter were not having it.

There's no doubt that running a company is a tough job. Holding the fate of hundreds or thousands of employees and the weight of success or failure of a business on your shoulders is definitely a big source of stress.

But how much more valuable is one person's stress than another?

That's the question Dr. David Morgan, former CEO of Australia's Westpac Banking Corporation, inadvertently addressed in an interview for a new biography. According to The Age, Morgan told the book's author, Oliver Brown, that the reality of CEO life is "seldom openly discussed."

"Most people don't talk about it honestly," Morgan said. "Yes, CEO life is very glamorous. You're recognized, you're given the best seats in restaurants, and you're ridiculously overpaid. But you need stamina. As the leader, you rarely play the grand final, but more an endless succession of semi-finals."

"You can hardly ever relax, and that creates intense strain," he added. "Behind closed doors, some CEOs literally weep."

And that was the straw that broke Twitter's back.

People who have 'literally wept' over stress at jobs where they made under $40K a year showed up by the thousands.

But sometimes they weep in private, right?

At least Morgan admitted that CEOs can be "ridiculously overpaid." But trying to justify that with multimillionaire tears totally falls flat for the multimillions of people who work in stressful, underpaid jobs every day.

"Raise your hand if you've 'literally wept' from stress at a job that paid you less than 40 grand a year," she wrote.

@phranqueigh This is me hiding in the back after a particularly hard day dealing with customers who want to pretend… https://t.co/UFaaEbU7EZ
— Melissa T (@Melissa T) 1551590336.0

@phranqueigh I work in children services in the UK, we joke that you haven't really made it as a social worker unle… https://t.co/FaDAtykzXH
— Sarah (@Sarah) 1551548805.0

There is zero evidence that the more stress you have in a job, the more you get paid. In fact, as several people pointed out, the less they got paid at a job, the more they cried.

An entire thread could have been dedicated to the pay/tears ratio of teachers.

Unless you have tried to educate a classroom full of kids, it's hard to understand the amount of stress that goes along with the job. I started out as a teacher and while it's a rewarding career in many ways, it's also the hardest job I've ever had—and one of the worst paid per actual working hour. Every teacher I know has "literally wept" over their jobs, many while working other jobs to make ends meet.

@phranqueigh I'm a teacher. Need I say more? The stress mostly comes from everything other than the actual teaching! Definite tears.
— NatsMusicTeacher (@NatsMusicTeacher) 1551566480.0

@JenniferinIN @phranqueigh God. This. So much. I never became a teacher because just the student teaching experienc… https://t.co/ipqLShzQpD
— Adain (@Adain) 1551543992.0

What stressed out millionaires don't recognize is how much stress is caused by not having financial security.

Some users shared stories of how they couldn't afford to take time off work, even for medical reasons.

@sothenkatiesays @phranqueigh @needsmorealeph I was having a miscarriage & my biannual class observation by the dep… https://t.co/yM2fCrgDGC
— Rachel McShane (@Rachel McShane) 1551579787.0

When your work includes business meetings over rounds of golf and tables at 5-star restaurants, followed up by going home to a luxurious house that you can afford to pay someone to clean, and a retirement account worth more than most of us will make in our whole lifetimes, it's hard to feel sorry for you, no matter how hard your job is.

Running a company is stressful, but so are millions of other people's jobs that pay a tiny fraction of what most CEOs make—and without the perks. Dr. Morgan easily could have retired in comfort after his 9-year stint as Westpac's CEO. Most of us have to work our butts off for our entire adult life to be able to stop working and still have food on the table.

So yeah. We know CEOs have tough jobs, but the teachers, social workers, non-profit employees, retail associates, and other underpaid, overstressed workers aren't going to lose any sleep over anyone's $1,000+/hr tears.

Dad and daughters take a walk through Disneyland.

Keep ReadingShow less
Get stories worth sharing delivered to your inbox
By signing up you agree to Upworthy's privacy policy.
Science

Several times during the surgery, the patient played the theme song from "Love Story" by Francis Lai.

"Awake surgery" allows brain surgeons to see the functioning parts of the brain to avoid during surgery.

This article originally appeared on 10.17.22

Do you ever step back and marvel at the miraculous things human beings have figured out how to do?

Less than 200 years ago, no human being had ever played a saxophone, there was no such thing as anesthesia and if you had even a simple brain tumor, you were just out of luck.

Now, a team of doctors in Italy has successfully performed a highly complex, nine-hour brain surgery on a man while he was awake and while he played the saxophone. Not only that, but the patient reported feeling "tranquility" during the surgery and only spent a few days in the hospital after the surgery before being discharged.

Brendan Fraser might be making the greatest career comeback ever, racking up accolades and award nominations for his dramatic, transformative role in “The Whale." But the OG Fraser fans (the ones who watch “Deadpool” solely to hear his voice and proudly pronounce his last name as Fray-zure, for this is the proper pronunciation) have known of his remarkable talent since the 90s, when he embodied the ultimate charming, dashing—and slightly goofball—Hollywood action lead.

The best parenting advice I've read in a long time: Someone will always criticize you.

You can't please everyone!

This article originally appeared on 03.08.16

Like most parents, I didn't know what I was doing when I first became a mom — because I'd never done it before.

I was 27 when our first child joined our family through adoption. He was 10 months old.

My son and me shortly after his adoption. That look on my face can probably best be described as "clueless but hopeful." All photos of my kids and me belong to me.