A baby who died in the hospital a few weeks ago is now alive and able to go home. 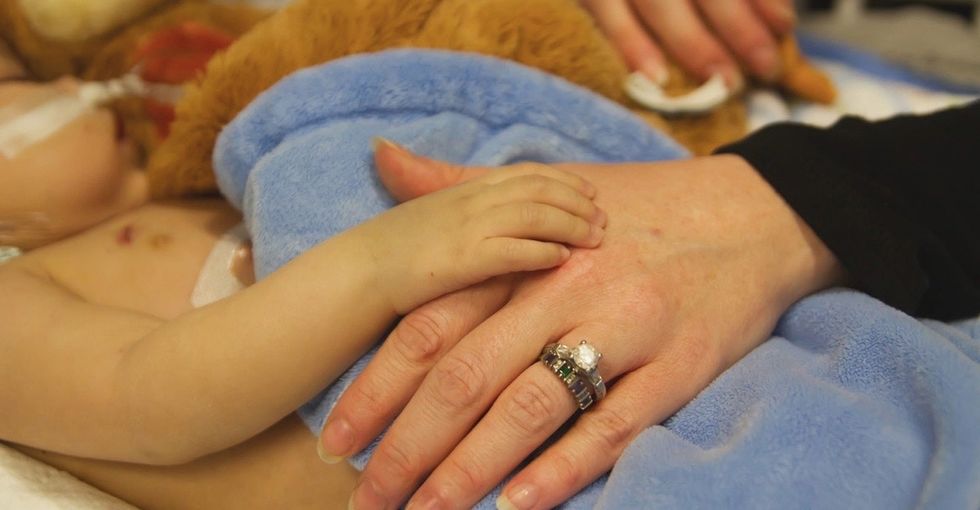 Few things will capture a parent's heart more than welcoming a baby into the world. But what happens if that baby's heart won't allow him to stay in the world once he arrives?

Sadly, that's what happened to Mindy and Rob Seay from Anchorage, Alaska.

The couple was all smiles even though they knew their lives would be turned upside-down as soon as Lincoln was born. All photos a from the Seay family, used with permission.

Their son Lincoln was diagnosed with severe heart defects when Mindy was 20 weeks pregnant. Shortly after his birth, baby Lincoln needed open heart surgery to install a shunt that would keep him alive.

But when he turned 3 months old, he outgrew his shunt and the young couple heard the words that no parents want to hear: Lincoln needed a heart transplant.

Mindy was devastated. She couldn't get over the fact that the baby boy she fell in love with could be taken away from her.

No parent ever wants to see their baby like this.

"If there was ever a time for me to step up as dad and husband, that was the time."

Rob was in pain as well, but he knew that his family needed him more than ever. And he delivered.

He left his job and relocated his family, including the couple's older children, to be nearer to Seattle Children's Hospital.

He's the first to admit that he was scared, but Rob dug deep to find the strength to keep everyone positive. "I refused to let my family suffer," he told Upworthy. "I made sure that every action I made was intentionally directed towards giving them the support they needed."

Rob didn't know what would happen with Lincoln, but that didn't stop him from stepping up his game as a dad and husband.

Rob did it all so Mindy wouldn't have to.

To that end, he enrolled the boys in school, did the shopping, cooking, cleaning, laundry, and he ran the kids all over the place.

He also wanted his kids to have fun while they were in Seattle, even though the reasons for being in the Emerald City were far from enjoyable.

Rob does everything he can to make his kids happy.

That would've been enough, but he wanted to ensure his sons were doing OK emotionally as well.

"I made sure to ask them questions about their feelings concerning Lincoln," Rob said. "I didn't want anything bottled up. They needed to know they could talk to me about anything."

The man was a Grade-A caregiver.

Through it all, he didn't ask for praise, he didn't complain, and he didn't want anyone to feel sorry for him. He did these things because he's intrinsically motivated to be a good man, father, and husband.

But even though Rob was doing his part to keep his family happy, little Lincoln was fighting for his life in the hospital.

After two episodes of cardiac arrest, Lincoln finally had some good news: He was going to receive a new heart.

This was the happiest day for the Seay family. In light of it all, Mindy wrote a powerful letter to the donor family on Facebook.

But as Lincoln was being prepped for the transplant, his heart stopped beating and he died.

For a few scary moments, Mindy experienced the immense pain of losing a child.

The doctors, however, refused to give up.

They opened up Lincoln's chest as fast as they could, manually compressed his heart, and successfully connected him to a heart bypass machine.

In many cases, this process can take up to two hours to complete. The doctors here did it in 12 minutes. And it brought Lincoln back to life.

And then it happened: A few hours later, Lincoln was given a new heart and suddenly he was like a brand-new child, filled with energy and happiness.

After the procedure, Lincoln was given a new lease on life.

Lincoln was set to be discharged from the hospital this past week, and Mindy wants to ensure an unsung hero gets his due.

Rob was overcome with emotion once he learned that his baby boy would survive.

That's right. The baby who died in the hospital a few short weeks ago is now alive and able to go home.

There are a lot of heroes to choose from in this story. The doctors, the mom who stayed by her baby's side, and the baby who endured so much just to survive are obvious candidates. However, the first person Mindy thinks of is her husband.

We've made it clear around here that dads shouldn't get credit just for being dads. But Mindy firmly believes there's no way she would've gotten through this without the love and support of her husband Rob. To her, he's the true hero.

"I could not imagine getting through this without Rob's support," Mindy said. "He gives his all to our family and he often sacrifices his own needs to take care of ours."

"This is what I'm supposed to do."

After so much, this baby is finally going home.

And little Lincoln will benefit greatly from having parents like Rob and Mindy who love him with all their hearts.