3 reasons to stop praising dads for doing what they're supposed to.

Because if moms aren't viewed as heroes for creating a ponytail or changing diapers, neither should dads. 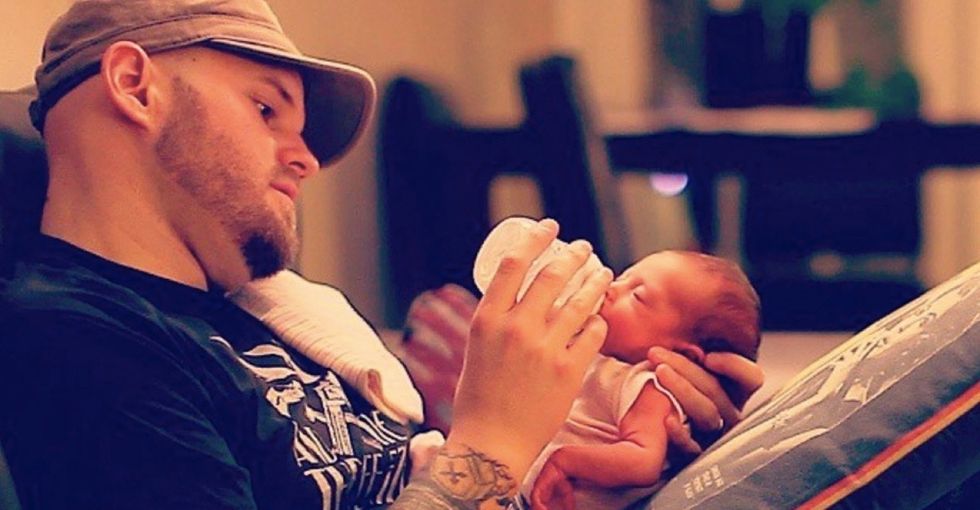 Jackie is a mom of two living in Tampa. She's not a fan of the praise dads are getting lately for raising their kids.

"I know this is going to sound bitter, but all of the dad-worship stuff needs to stop," Jackie told me. "It seems like all a man needs to do is change a diaper or braid hair, and he's instantly a superstar."

For every woman who swoons at seeing a photo like this, there is another one rolling her eyes wondering what the big deal is.

We all love seeing photos of dads with their kids ... right? Photo from the Daddy Doin' Work Instagram feed, used with permission.

Where did all of this praise for dads come from? The Internet lost its collective mind over a recent Super Bowl commercial featuring dads doing their daughters' hair, so we know this phenomenon is real.

Regardless of the reasons, moms like Jackie aren't amused.

Rick Brown is all smiles with one of his five daughters, Madison. Photo from Rick Brown, used with permission.

Meet Rick. He's a dad to five daughters and absolutely loves his girls to death.

One day while his wife was busy, Rick loaded up his girls into his car and took them to the local library to do some reading. Then things started to get strange. People kept staring at him as if he was an "exotic zoo animal." Finally, a woman stopped him to say how "amazing" it is that a dad was at the library with his girls.

Here's the thing about Rick and other dads like him: He's not interested in receiving compliments on how he does his daddy thing.

"I truly enjoy spending time with my daughters," Rick told me. "I don't think dads should get credit for being parents."

You know what? The dude's right.

With that, here are three simple takeaways regarding the recent dad-worship epidemic.

Let's pretend that you like to brush your teeth before leaving the house every morning. (Actually, let's not pretend. That's probably something grown folks should be doing on the daily.)

Now let's pretend that as you're strolling down the street, people stop you to share the following thoughts:

"Whoa! You brushed your teeth today?! You are amazing!"

"I wish everyone could be like you. Good oral hygiene is soooooo important!"

"You are such a role model. You make fresh breath cool!"

That would be weird, right?

It's normal to brush our teeth. It's not less weird for dudes to receive praise for doing the "normal" child-rearing tasks.

"I was once told that I must be a great dad because I hold my daughter so well," Jason, a dad to a 6-month-old daughter, told me.

What does that even mean? How do you respond to something like that?

GIF from "The Hangover."

We (dads) aren't bumbling buffoons. We know what we're doing.

But when men are seen as "great dads" just because we can hold babies without injuring them, we know that the fatherhood bar needs to be raised.

Which leads to the next point.

2. All of the daddy praise makes it harder for moms to be moms.

Whether we like it or not, the pressure to be a good mom is real. When we live in a world where dads can put videos like this online and are seen as geniuses, it leaves some moms frustrated.

"I struggle with parenting, like many women I know," Jackie said. "I feel like I always have to be perfect while dads can skate along by doing pretty much anything."

If we put our hearts and soul into something, we want to know that we're doing a good job. Motherhood is no different.

These ladies have a frustrating gig, and they want to be acknowledged for it. Melissa, a mom of three shared that exact sentiment:

"My husband can put my daughter in a lumpy ponytail, and he's a hero. If I did that, I'll be seen as the worst mom ever. Guess what? Sometimes I don't have the energy to style hair perfectly or create perfectly healthy meals. But I work just as hard being a parent as he does. Why can't society see that?"

If we're going to praise dads for completing tasks with or for their kids, we should praise moms just as much for doing the same thing. No exceptions.

Because let's be real: The next time a mom is viewed as a hero for creating a ponytail will be the first time.

3. The dad-worship thing needs to be everywhere before it goes away.

There are a lot of articles celebrating fatherhood around here. But let's look at it a little differently.

Back in 1987, people celebrated the fact that Doug Williams was the first African-American quarterback to start (and win) a Super Bowl.

It was a really big deal.

The media was all over Doug Williams back in the day. Photo by Mike Powell/Getty Images.

But it was a really big deal because we hadn't seen it before.

In 2016, there are many African-American quarterbacks in football, and we hardly blink an eye at them. Why? Because it's normal now.

There is good news for people who are growing weary of the daddy love on the Internet: This too shall pass.

As counterintuitive as it may seem, the only way to truly normalize good dads is to celebrate them.

Share them, talk about them, love them, and celebrate the hell out of these dudes when you see them.

When you see a dad going viral for something that a mom can do blindfolded, just smile knowing it signifies that we're one step closer to it becoming old news.

Eventually dads braiding hair and holding dance parties for our kids will be as newsworthy as brushing our teeth.

And quite frankly, that's the way it should be.