9 things most people don't know about life on the Mexican-American border.

We're masters at juggling the two cultures that surround us. 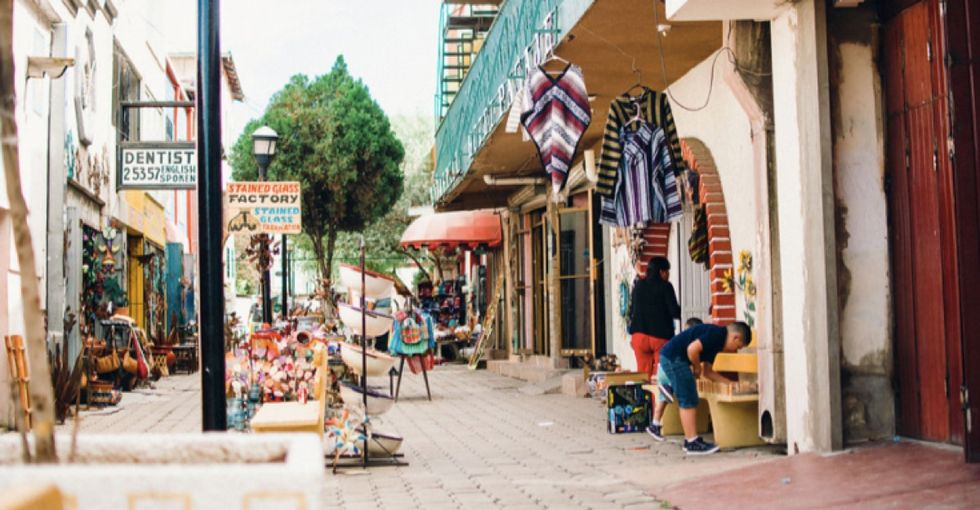 I grew up in Nogales, Arizona, a border town along the U.S.-Mexico border.

Nogales has always had a big, physical barrier between the two countries, and I never quite understood what that meant as a kid. Back then, it was normal to drive along the freeway toward downtown and see a whole other world through a dingy fence.

Homes in Nogales, Sonora, Mexico, across the border from Nogales, Arizona. Image by Nieves Montaño, used with permission.

Through that fence, I remember seeing houses seemingly stacked on top of each other, painted in bright colors, like hot pink or teal. I always wondered how those residents got in and out of their houses, which were perched on a steep hill. I imagined a long stairway winding up the back of the mountain, a stairway that I couldn't see.

Mexico wasn't physically far away from me at any time growing up. But culturally, Nogales, Mexico, was worlds apart from Nogales, Arizona.

Lately, there's been a lot of conversation about border towns. So as someone who has lived in one, here are nine things I want you to know about living on the U.S.-Mexico border:

1. Going back and forth between countries is hard ... and easy.

It's super easy to walk or drive from Arizona into Mexico.

When I was growing up, we often drove or walked across the border for everyday activities and errands. As an American, it was easy to cross the border to have lunch with a friend or even to attend less costly doctor appointments.

Even today, if you walk to Mexico, there's hardly (if any) contact with an agent. If you're crossing the border in a car, you may get sent off to the side for a quick car inspection, but that's about it.

View from Nogales, Arizona, going toward the Mexican port of entry. Image by Jesus F. Barrón, used with permission.

But crossing from Mexico into the U.S. is no piece of cake.

If you want to walk from Mexico back into the U.S., you'll have to stand in line and wait to be called up to a counter by an immigrations agent. They'll ask you to show your passport and possibly answer a few questions, and you'll also be subjected to a search.

If you drive across, you're looking at a minimum of 30-45-minute wait in your car to reach the checkpoint. Then the agent will ask you questions, ask to see your passport, and possibly ask to search your car.

It's super easy to leave America, but not so much to come back ... which is a small example of the much larger story of immigration in America.

2. Some Mexican children cross the border every day to attend school in America.

Fernanda Astrain lives in Nogales, Mexico, and she drives her two elementary school kids to a private school in the U.S. every day so they can learn English while simultaneously learning about the Catholic faith, which is very important to her.

3. There are also special circumstances during which border crossings become more common from Mexico to the U.S.

On Christmas Day, for example, kids from Nogales, Mexico, are often selected at random and bused over to the U.S. to collect presents and a meal.

And once a month, volunteers prepare special permissions from customs so that kids from Mexico can come to the U.S. side and get medical treatment from American doctors.

4. Border towns tend to be almost 100% bicultural, which affects the terminology we use.

Most kids on the border grow up thinking everyone is bilingual — I know I did. This is because, in order to communicate in a border town, you really do have to understand both languages.

This can affect even basic things like the terms we use, terms I've never heard used anywhere else. For example, I grew up referring to Nogales as "el otro lado," which literally translates into "the other side" (this term applied whether we were on the American or the Mexican side).

Another curious term that I've found to be completely exclusive to our border town vernacular is "across the line." Say that to anybody who's not from Nogales, and they'll look at you perplexed. But for us, Nogales, Mexico, was so close that it was literally "across the line."

Looking through the iron fence from Arizona into Mexico. Image by Alicia E. Barrón.

5. But if you don't speak English? No problem!

In border towns like mine, Spanish takes precedence. The "No hablo Inglés" phrase is almost nonexistent in American border towns with Mexico because, while some may not speak English, all of us speak Spanish.

Most of us also speak a hybrid variation. It's very fluid and natural and now has an unofficial official name: Spanglish. While ordering at a drive-through, it's completely normal and acceptable to place your entire order in English, Spanish, or Spanglish. The message will always come across loud and clear, no matter how you say it.

6. When I was growing up, we got to boogie young.

Growing up in a border town, I was exposed to nightlife a lot sooner than most American kids. That's changed quite a bit in the last 20 years, but back then, a fake ID could get you into any bar or club in Mexico when you were as young as 14 or 15.

Good idea? Absolutely not. Was it a good time? You bet! However, mandated curfews and officers waiting at the border for incoming partygoers from Mexico have really changed things to ensure everyone's safety. Parents are now required to go pick up their kids at the border if they're under 18 years old and coming back from Mexico late at night.

7. Culture shock? Also not a thing for me.

When you cross that line between Arizona to Mexico, you'll instantly see a difference in culture, hear a difference in sounds, and experience a totally different environment from the one you're coming from. But for me, there was never such a thing as culture shock.

Living between and within two cultures was my norm, and I still find that I can navigate between the two worlds seamlessly. In many of my childhood memories, Nogales, Mexico, bleeds into Nogales, Arizona. I wish more places had a melding of cultures like this.

8. The curious case of the currency.

We often use American and Mexican currencies in my town, which means a two-peso coin and a quarter are easily confused because they are the same size and shape. It's not uncommon to be rummaging through your coin bag and present the cashier with a handful of pesos.

The kicker is just how different they are in terms of actual monetary value, though. The devastating devaluation of the peso (currently at about 19 pesos per dollar) is also making things extremely difficult for people who work in Mexico. As Astrain (who you'll remember lives in Nogales, Mexico) explains, "My husband earns money in pesos and we are spending money in U.S. dollars. That is expensive!!"

A quarter and a two-peso coin are roughly the same size. Image by Jesus F. Barrón, used with permission.

9. The Border Patrol is a constant presence.

I'm used to it, but you might be shocked if you visited my town because those green and white vans and SUV are everywhere. There are also agents on bicycles always riding around town.

With all this talk about Donald Trump building a yuuuuuuge wall between the U.S. and Mexico, border towns like mine have suddenly jumped into the limelight.

But oddly enough, few people who actually live or have lived on the border are losing sleep over this divisive rhetoric. Yes, the border wall has served a huge political purpose as both a literal and figurative prop in this election. But to most of us who live exactly where it's supposed to go up, the concept is obviously flawed.

The odds of waking up to a mega-team of construction workers erecting a 10-foot-tall wall in our hometown seems so highly unlikely as to be almost impossible. We would sooner expect a visit from the Queen of England.

To me, growing up in a border town means being part of two cultures.

Living in a border town is about an added layer of cultural identity. It means becoming a master at juggling American culture and Mexican customs. It means that every fiber of my being is bicultural.

To me, growing up in a border town has been the best secret weapon I could ask for. I'm able to go into the world and explore it with an open mind and as much curiosity as I can gather.

View of the wall from the Mexican side of the border. Image by Nieves Montaño, used with permission.

Because after walking across a line for my whole life, boundaries don't seem so immoveable.

During his Love On Tour stop in Detroit, Styles found a fan holding a sign that read, "Should I text him?" which received boos among the crowd. However, in typical Harry fashion, his reply was simply, "is he nice to you?"

You can watch the full video here:

Keep Reading Show less
Get stories worth sharing delivered to your inbox
By signing up you agree to Upworthy's privacy policy.
Trending Stories
politics
Well Being