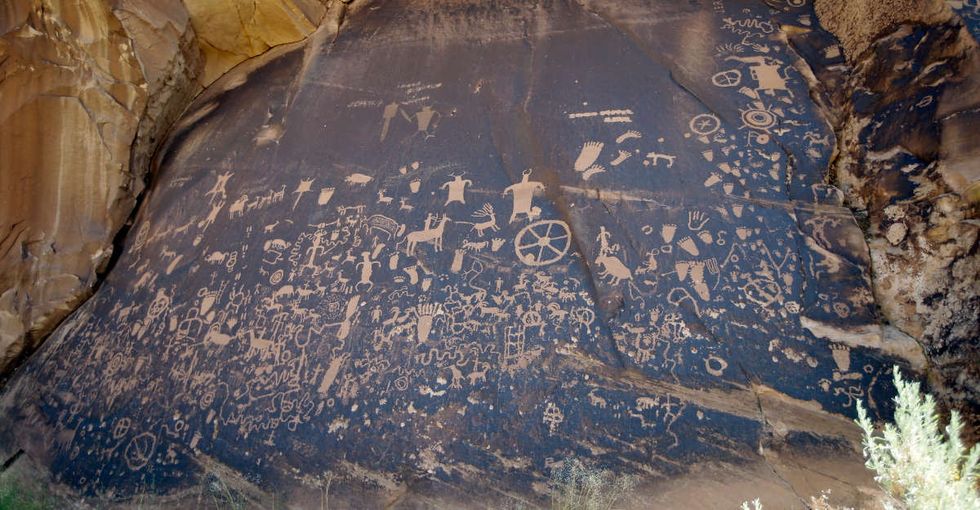 On his way out the door, President Barack Obama is leaving America with two brand-spanking-new national monuments.

The designations were controversial — many local politicians opposed the measure, describing the designations as federal overreach, while others, including Native American tribes, were thrilled.

"We have always looked to Bears Ears as a place of refuge, as a place where we can gather herbs and plants and as a place of sacredness," Navajo Nation President Russell Begaye told The New York Times.

Part of what sets the new monuments apart are hundreds of Native American petroglyphs — pictorial art and writing from centuries before the European colonization of the Americas — carved on rocks and written inside ancient structures within.

The newly christened Gold Butte National Monument is full of petroglyphs like this one.

Some of the pictograms were defaced with graffiti and bullet holes during rancher Cliven Bundy's standoff with federal authorities in 2014. The new designation will give additional protection for the ancient art and writing.

Newspaper Rock, which lies within Bears Ears National Monument, includes hundreds of petroglyphs like the one below — carved by Puebloan people over hundreds of years, beginning as early as two millennia years ago.

The Moon House, also in Bears Ears and so named for the full and crescent moons on the interior walls of the structure, was likely built in the 13th century.

The structure contains numerous examples of Native American pictography inside, where archeologists believe as many as 30 people lived. The house is incredibly fragile, and only a few daily permits to see the building are currently issued.

The house is located in McCloyd Canyon, a steep hike that gives way to this stunning view of the house under layers of rock.

Mule Canyon, Utah, contains these Anasazi dwellings and granaries, known collectively as the "House on Fire."

Of course, the national monuments are also full of just-generally spectacular rock formations untouched by ancient construction, art, or writing — like this one in Gold Butte.

Some local residents remain, understandably, concerned that monument designations will close down possibilities for recreation and development in the areas. But the importance of preserving these American Indian treasures, and the land they occupy, is impossible to overstate.

Ensuring that art, writing, and buildings are around for future generations is critical to building a United States of America that owns the full breadth of its history.

Thanks to our Native American forebears, these lands contain a key component of that story. And thanks to Obama, they now belong to all of us, together.

Unfortunately, photos can only show so much.