17 things about 2017 that weren't complete and utter garbage. 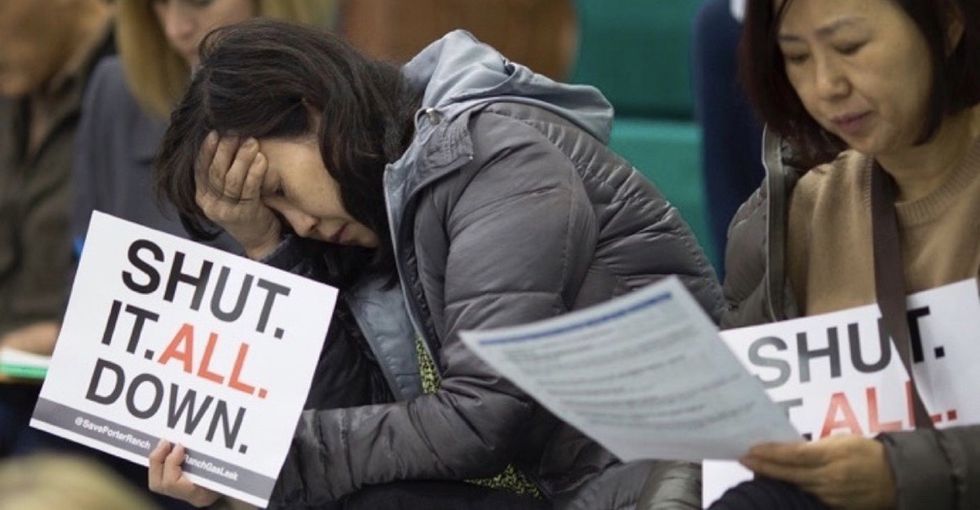 It was the equivalent of getting gum stuck in your hair, then realizing it wasn't gum at all. It was Nazis.

But there were positives too. Seriously.

Stop laughing! I mean it. There were good things about 2017. And I have the facts to back it up. Here are 17 things that made this a pretty awesome year.

1. Mahershala Ali became the first Muslim to win an Oscar in an acting category for his work in "Moonlight."

(OK, OK: Ellen Burstyn fans may try and tell you it was her, since she now practices a combination of religions including Sufi Islam. Perhaps Mahershala Ali is the first solely Muslim actor to win an acting Oscar. But that doesn't exactly roll off the tongue.)

2. For 7.6 billion collective minutes, the world came together to celebrate the miracle of life.

April the giraffe's 16-month pregnancy came to a cliffhanging conclusion as the mom-to-be labored over the course of several weeks. The Animal Adventure Park captured more than 232 million live-stream views before the healthy male giraffe baby was born April 15.

3. No white men were nominated for the Album of the Year Grammy. It's the first time that's happened since 1999.

Technically, a few white men could still take home statues as producers if certain artists win. But it's pretty awesome to see people of color and women leading the field for one of music's most significant honors.

4. Through the Affordable Care Act, people signed up for health insurance from the government marketplace at a record-setting pace.

In November, during the first week of open enrollment, more than 600,000 people signed up, crushing the pace of previous years, despite Trump's efforts to weaken the program.

5. Cities and countries around the world are preparing for a gas-free future.

The Netherlands, France, and India are all in the process of phasing out the sale and use of gas- and diesel-powered cars. Cities like Oxford, Copenhagen, and Barcelona want the job done as early as 2020.

6. The year's most popular YA novel was written by a black woman and inspired by Tupac and Black Lives Matter.

If you, or the teens in your life, haven't read Angie Thomas' "The Hate U Give," you should — especially before the movie comes out.

Yes, The Hate U Give will be a movie. Here's a thread featuring the director as well as the cast members announced so far!
— Angie Thomas (@Angie Thomas)1501795611.0

7. Volunteers planted 66 million trees in India. In one day.

The herculean effort was made possible by more than 1.5 million volunteers who made quick work of the project on July 2, 2017. In addition to an army of awesome volunteers, this company hopes to plant 100,000 trees each day using drones.

8. When natural disasters struck, people rallied together to raise funds and collect resources for people in need.

After the earthquake in Mexico and Hurricanes Harvey, Irma, and Maria actors, athletes, inmates, former presidents, kids, and everyone in between came together to help people in harm's way. Bad news can bring out the best in us, and it certainly did this year. (You can still donate, btw.)

9. Congress — you know, the folks making life a little hard right now? Well, they're part of the most diverse U.S. Congress ever.

19% of the 115th Congress are non-white, and between the House and the Senate, there are 50 black members. It looks like things can only get better, too, as 34% of the new legislators are people of color.

10. That hole in the ozone layer we've been worried about for decades? It's shrinking.

The ozone surrounds the Earth to help filter out some of the sun's ultraviolet radiation. Lessening the use of CFCs and implementing other Earth-saving measures has led to a gaping hole that's 1.3 million square miles smaller than last year. In fact, it's the smallest it's been since 1988. It's still very much there, though, so don't put away the sunscreen just yet.

11. While the reckoning has only just begun, people who harass, abuse, and sexually assault other people are finally getting theirs.

13. Children's scouting programs did some pretty amazing stuff. And I'm not even talking about the cookies.

The Girl Scouts introduced a badge for cybersecurity and a pretty amazing guide to helping parents talk to their kids about weight and body image. The Boy Scouts announced that they're welcoming transgender children and girls to their ranks. And this Cub Scout made headlines for calling BS on a state politician. Children are the future — and the future looks pretty freakin' cool.

14. Transgender lawmakers won big at the state and local level.

Virginia's Danica Roem and Minneapolis' Phillipe Cunningham and Andrea Jenkins all earned seats on state and municipal councils. Roem even beat out the self-described "chief homophobe." Good riddance to backward, shortsighted people making decisions for all of us.

Results from a new study reveal a small portion (about the size of a matchbox) each day may improve heart health. And yet, still no funding for my study  on stuffed crust pizza and its effect on mood.

16. In a true feat of scientific achievement, NASA's Cassini spacecraft pulled a Bruce Willis and dove into Saturn's atmosphere.

For 13 years, Cassini orbited Saturn and took truly incredible, detailed images of the ringed planet and its moons. Where would we be without the hard work of researchers, scientists, and this brave robot's sacrifice?

17. We were graced with Bodak Yellow.

The world is better, brighter, safer, and happier now that Cardi B's "Bodak Yellow" is in our lives. Frankly, I was thinking of making all 17 items on this list Bodak Yellow. Not into hip-hop? Make it a gospel jam. It even brings perfect strangers together.

2017 was scary, frustrating, and downright troubling. But there's always good stuff too.

When things are at their worst, do your best to seek out and remind yourself of all the ups, bright spots, and big wins going on too. And if you can't find them, at the very least, play some "Bodak Yellow."