This 11-year-old Scout became a hero after grilling a senator on her policies. 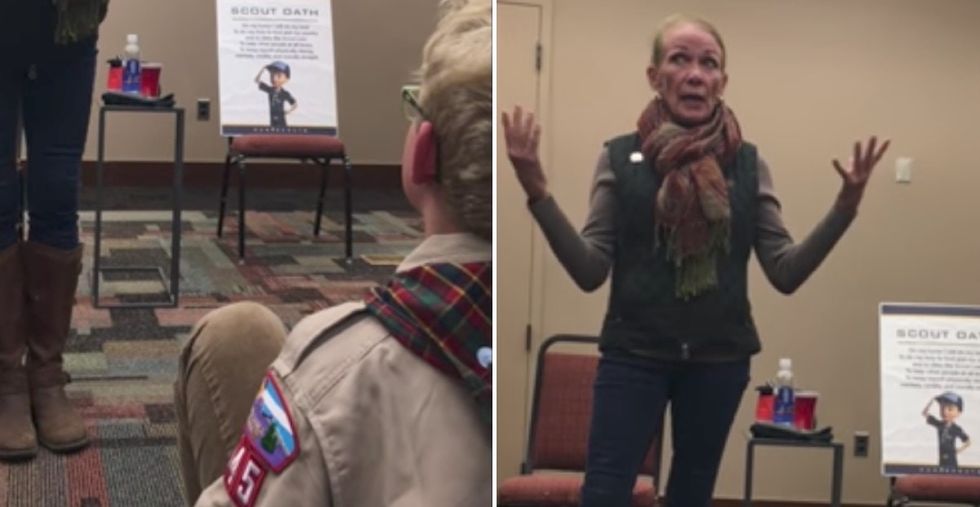 The Boy Scouts of America have been all over the news lately, but in a recent video, it's one of the group's youngest members who's making waves.

The video was taken earlier this month and features a Colorado state senator, Vicki Marble, holding a question-and-answer session at a Cub Scout den meeting. The senator likely had no idea just how tough the questions were going to be.

One of the scouts, 11-year-old Ames Mayfield, had come prepared to ask his elected official some serious policy questions.

Mayfield, respectfully armed with plenty of research, demanded the senator explain her stances on gun control and health care.

Referencing an earlier scandal in which Marble suggested a connection between cultural diets and disease — aptly named "chicken-gate" — Mayfield drilled the senator for her claims: "I was astonished that you blamed black people for poor health and poverty because of all the chicken and barbecue they eat."

Marble deflected and blamed the media for fabricating the story and 11-year-old Mayfield for believing it.

Later, Mayfield — who again, is 11 years old — pressured the senator regarding a bill she co-sponsored that would allow domestic violence offenders to own firearms.

"Why on Earth would you want someone who beats their wife to have access to a gun?" he asked after rattling off a bundle of statistics to support his argument (and shortly before being cut off by his den leader).

"It has been shown that the more guns a society has, the less crime or murders that are committed," Marble responded.

According to the Cub Scouts' own website, a true scout is "brave" and "helpful," which makes what happened next even stranger.

Mayfield was kicked out of his Cub Scout den.

Mayfield and his mother, Lori, who posted the Q&A footage online, say they were stunned by the decision. For Lori's part, she insists she didn't put her son up to it.

“The only coaching I gave him was to be respectful,” she told the Denver Post. “Don’t be argumentative, preface things ‘with all due respect.’ I felt my son followed directions. He asked hard questions, but he was not disrespectful.”

Mayfield has received an outpouring of support from people on social media. Meanwhile, the Scouts say they're looking for another den he can join.

Whether or not he rejoins remains to be seen.

Whether you agree with Senator Marble's positions on these issues or not, it's important to encourage young kids like Mayfield to take on an active role in challenging leadership, holding them accountable, and asking tough questions. That's how a healthy democracy functions.

We shouldn't lose sight of the fact that our country was built on just this sort of debate, and we should teach kids to ask smart, respectful questions — not blind obedience.