14 years ago Trump gave an inspiring speech about walls. Yesterday, 400 migrants took his advice to heart. 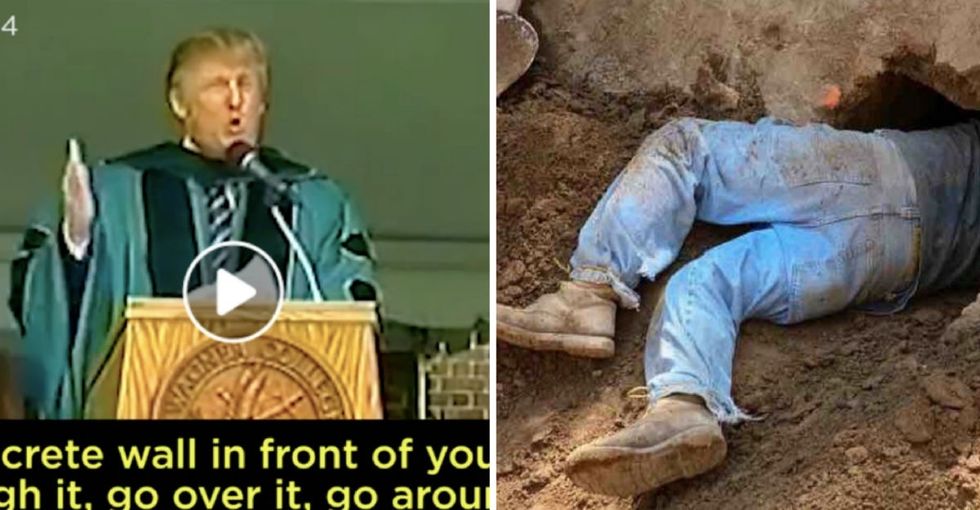 On January 17, 400 migrants seeking asylum helped dig a tunnel underneath the border wall between Mexico and the United States. They immediately turned themselves over to U.S. Customs authorities.

The willingness of these migrants, including an estimated 200 children, shows both the desperation of those seeking asylum but also the fundamental decency of those same people who turned themselves in upon crossing the border.

In fact, their actions are so inspiring they remind us of a little speech Trump gave in 2004 in which he literally talked about climbing over, under and around the walls that are put in front of us.

For every Trump statement, there's an equal and opposite previous statement.

It's basically scientific law that for everything our current president says, something he previously said directly counters or contradicts it. The people of the internet have made a game out of finding Trump tweets that don't age well (here are 31 examples, just for funsies) and one entrepreneur even created now-sold-out flip flops with contradicting Trump tweets printed on them.

"I wanted to highlight this hypocrisy," said the creator of the flip flops.

A newly unearthed video gem makes Trump's arguments for his "big, beautiful wall" sound even sillier than they already do.

For two plus years, we've heard Trump go on and on about the necessity of building a wall along the entire Mexico-U.S. border, which Mexico was (somehow, miraculously) going to pay for. Though he's now conceded that steel slats are a better choice for a barrier, much of his push was for a "big" and "beautiful" wall made of concrete—which makes archived footage from a commencement speech he gave in 2004 all the more hilarious.

In a clip shared by The Daily Show, Trump described to graduates of Wagner College how people should never get up, no matter what obstacles they come across—including a concrete wall.

"Never, ever give up," Trump said. "Don't give up. Don't allow it to happen. If there's a concrete wall in front of you, go through it, go over it, go around it. But get to the other side of that wall."

Oh man, once Trump gets his wall he better hope no one shows Mexico this old video we found.

Posted by The Daily Show on Wednesday, January 9, 2019

All hilarity aside, there are real reasons a wall won't do what the president claims it will do.

Much has been analyzed and written about the potential efficacy of and problems with "the wall," by much more qualified and knowledgable folks than myself. For example:

- Why the Wall Won't Work by David Bier, immigration policy analyst at the Cato Institute’s Center for Global Liberty and Prosperity. (The Cato Institute is a Libertarian think tank.)

- 5 Problems 'the Wall' Won't Solve by Michael Dear, emeritus professor in the College of Environmental Design at the University of California, Berkeley

- I voted for Trump. Now his wall may destroy my butterfly paradise. by Luciano Guerra, outreach coordinator and educator for the National Butterfly Center in Mission, Texas.

To sum up for the TL;DR folks, the wall won't solve the problems Trump claims it will. Most hard drugs are snuck through ports of entry not brought over the open areas of the border, terrorists are simply not coming in through the southern border, human trafficking is a much more complex reality than a wall can possibly address, and most research shows that immigrants both documented and undocumented are actually less likely to commit crimes than American citizens are.

Not to mention, illegal crossings have been on a serious and steady decline since the early 2000s, and are actually at a 46-year low.

There is no "flooding" of the border, despite the fear mongering rhetoric we hear from the White House. There are issues with immigration that need to be addressed, but building an expensive, environmentally damaging, largely ineffective eyesore is not the way to address them.

Not to mention, if people take Trump's own advice about getting through or over a wall no matter what it takes to get to the other side, there's no way it will work at even a very basic, purpose-of-a-wall level.

Instead of investing in a wall, let's put that money into meaningful immigration reform that reflects an understanding of the complexities of human migration and respects our identity as a nation of opportunity and diversity.