Why Disney nailed its casting choice for its newest princess, Moana. 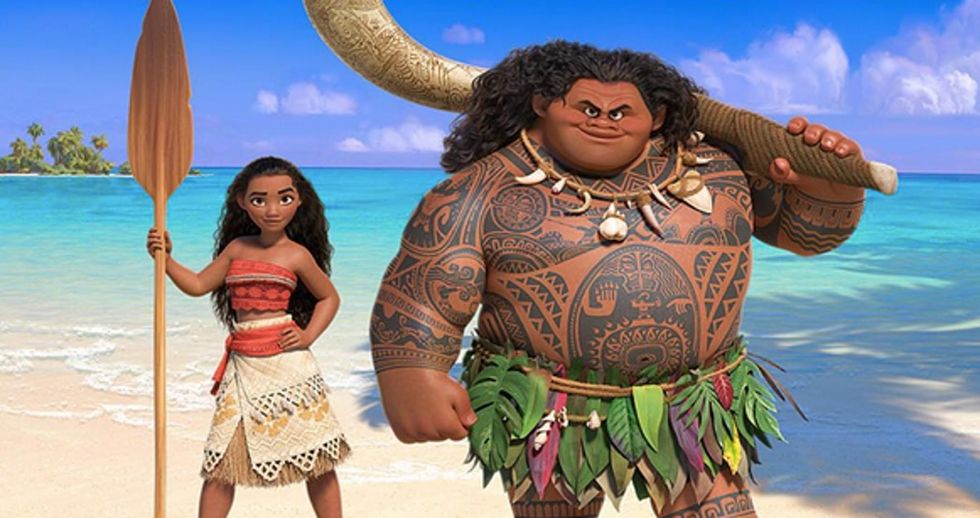 And, as expected, the Interwebs shook with joy.

The film — aptly titled "Moana," of course — follows its leading gal on her search for a fabled island in the South Pacific, as E! News reported. It's set to be released in theaters Nov. 2016. *marks calendar*

Disney also introduced the world to the real girl who's bringing Moana to life on screen, 14-year-old Auli'i Cravalho.

In about a year, Cravalho's voice will be filling up theaters around the globe.

The film has already landed Dwayne "The Rock" Johnson (who better suited to portray a demigod named Maui in the film than he?), who shared how thrilled he was about Cravalho's casting on Instagram.

IT'S OFFICIAL: After months and months of worldwide casting calls, we've finally found our next DISNEY Princess... #MOANA. I'm pumped to welcome 14yr old @AuliiCravalho of Mililani, Hawaii to our project. What's amazing about this story is that she didn't think she was good enough so she never auditioned. Fortunately, one of our Oahu casting agents discovered her singing at a charity competition and the rest is history. * An awesome lesson to all young kids out there... work hard, have confidence in yourselves and never think you're not good enough because you never know what the future holds. Congratulations Auli'i! Can't wait to work with you and watch you bring this new Disney Princess to life. #YesThatsMeOnTheRight #HisNameIsMaui #HesADemiGod #AndHePutsMoanaInHerPlace #SoHeThinks #DisneyAnimation #MOANA #TimeToSing
A photo posted by therock (@therock) on Oct 7, 2015 at 7:42am PDT

As Johnson explained above, Cravalho has virtually no big-time acting experience and was discovered by a casting agent in Oahu when she was singing at a charity competition. She went from an everyday teen to the buzz of the Internet overnight.

Maybe the coolest thing about Cravalho, though? She's actually Hawaiian.

To find Moana, Disney auditioned hundreds of girls throughout the Pacific Islands before deciding Cravalho — who is native Hawaiian — was the "perfect match."

“I didn't think I would have a chance," Cravalho said. “When I was little, I used to dance around the house singing at the top of my lungs. In my mind, that was performing, and I loved the feeling of it. But I never imagined being in a Disney movie, being Moana — representing my culture in that way."

It's worth celebrating when films cast people of color as characters of color. Because, oddly enough, that doesn't happen nearly as often as it should.

If you haven't heard of it, there's this thing Hollywood does called whitewashing, where characters that should be played by actors of color end up being played by white actors instead.

And film studios have been doing this for quite some time now. Remember when Elizabeth Taylor played Egyptian pharaoh Cleopatra? Or when Jake Gyllenhaal portrayed the Prince of Persia? Yup.

Recently, many filmgoers were outraged over Emma Stone being cast as Allison Ng — a character with Asian and Hawaiian roots — in "Aloha." And director Roland Emmerich felt his fair share of criticism for casting a white, cisgender man as the lead in his film, "Stonewall," ignoring the fact many of the real-life human rights pioneers from the 1969 Stonewall Riots for LGBTQ inclusion were actually people of color and transgender.

And just this past weekend, actor Rooney Mara told told People magazine she empathized with the frustration directed toward her casting in the film "Pan," in which she stars as Tiger Lily, a character who is undeniably Native American.

Seeing as a recent study from USC's Annenberg School for Communication and Journalism found that just 17 of the top 100-grossing films last year featured someone from an underrepresented racial group as a lead character, it's vital that people of color get more opportunity to tell their stories on screen.

In a time where whitewashing remains all too common in Hollywood, Cravalho's casting shouldn't be dismissed as no big deal. It's exciting!

Yes, "Moana" is just one movie, and Cravalho is just one actor. But it's a film that's already stirring excitement an entire year before its release. It's going to have an effect.

The world will watch a "badass" teen from the Pacific Islands fight monsters and capture millions of hearts on screen. The fact the real girl bringing Moana to life is someone who shares cultural similarities with her animated character is a pretty sweet addition to an already cool story.

Learn more about Cravalho being cast as Moana below: