While we weren't looking, Congress passed an amazing bipartisan bill.

"We can't ask a child to feed her mind when she can barely feed her stomach." 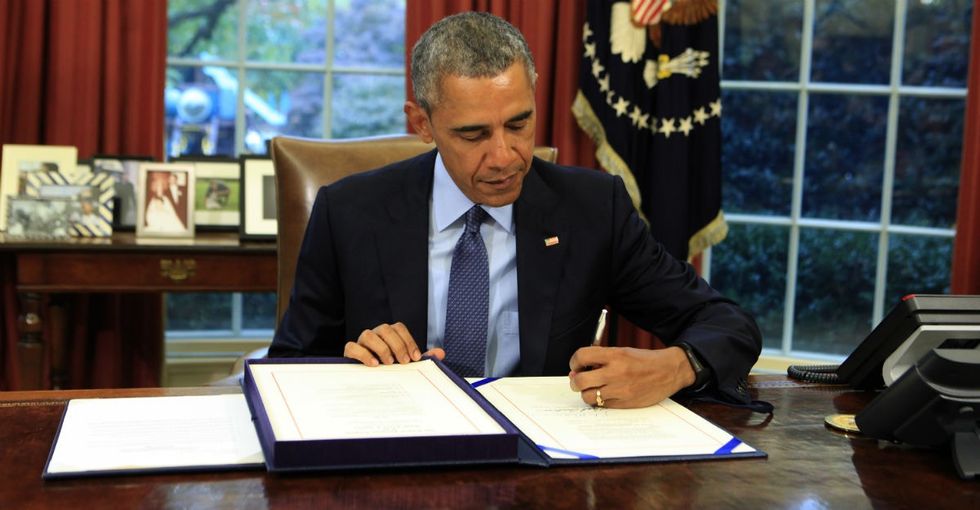 This July, while most of us were embracing air conditioning and watching presidential candidates butt heads, Congress did something amazing.

It didn't make many headlines, but it should have. This summer, the House of Representatives tried to pass historic bipartisan legislation. I repeat: historic. bipartisan. legislation.

And they did it!

Republicans and Democrats came together to pass the Global Food Security Act, a landmark bill to reduce global hunger.

I like to think this was President Obama when it came to his desk for signature:

The Global Food Security Act marks the first time in our history that the U.S. government — the largest provider of international aid — has actually passed a comprehensive strategy around food and nutrition security.

This is big on many levels.

The law will work to reduce food insecurity for the nearly 800 million people worldwide who suffer from chronic hunger.

It will help to reduce hunger, malnutrition, and poverty by focusing on agriculture initiatives, small food producers, and the nutrition of women and children.

According to Global Citizen, the $7 billion allocated for the efforts will guarantee two years of funding for food security investments, mainly to smallholder and female farmers. It will also provide two years of funding toward our country's response to natural and man-made disasters, which helps keep America safe by containing conflict. It will also improve the coordination between different parts of the government, helping to reduce waste and increase transparency.

Perhaps the best part is the evidence that these efforts work.

In Malawi, for example, every $1 invested in an empowering loan program for women helped to generate $29 for their community. That was just through one program.

In another case, 9 million small-scale farmers and rural families were able to increase their incomes by more than $800 million through improvements to their agricultural practices. That was just over the course of one year. Thanks, Obama.

Can you imagine those results on a much larger scale? That's the beauty of the Global Food Security Act.

The law will focus on certain areas of the world, but the U.S. still stands to benefit. How?

In a time when national security is on everyone's radar, reducing hunger will advance stability and security overseas — and in our own backyards.

"We’ve seen how spikes in food prices can plunge millions into poverty and hunger, as well as spark riots that cost lives and lead to instability," says National Security Advisor Susan Rice. "This danger only grows as a surging global population isn’t matched by surging food production."

She's right. We have enough food to feed 12 billion people. And yet, 800 million people are undernourished. Working to reduce global hunger will help advance international peace and security. And that's not just a political move — it's a moral one.

Over the years, partisan bickering and polarization has created such extreme gridlock in Washington that many Americans doubt our political process can actually work to make good things happen — so much so that we're shocked when it does.

The passing of this legislation with numerous champions on both sides of the aisle provides hope that bipartisan efforts do stand a chance.

Because, real talk, we can only move forward when we're working together. Investing our resources in ending hunger once and for all is a great place to start.