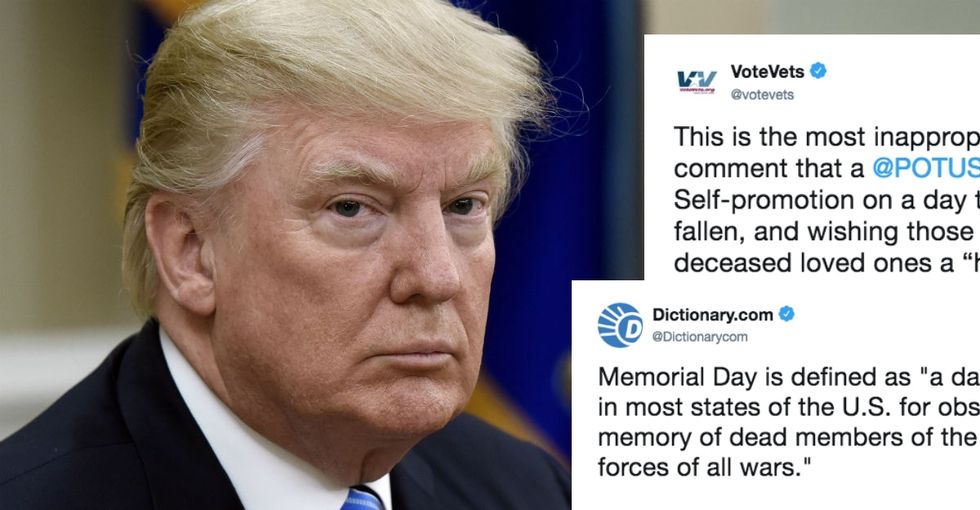 On Memorial Day, President Donald Trump decided to tweet this:

"Happy Memorial Day!" the message began. "Those who died for our great country would be very happy and proud at how well our country is doing today. Best economy in decades, lowest unemployment numbers for Blacks and Hispanics EVER (& women in 18years), rebuilding our Military and so much more. Nice!"

We rarely see political messages like that one shared on Memorial Day. Many Americans (and certainly most politicians) avoid wishing others a "happy" Memorial Day. The holiday — which has existed in some form dating back to at least the 1860s — honors Americans who've lost their lives serving in the armed forces. It's a sobering day.

It makes sense that presidents tend to downplay partisanship and avoid self-promotion on Memorial Day. But Trump — with a tweet that gave his administration credit for economic successes largely experienced under his predecessor — has yet again broken the status quo.

The progressive group — which fights for veterans on a number of issues like employment and health care — called Trump's tweet "the most inappropriate [Memorial Day] comment that a [president] has ever made."

This is the most inappropriate #MemorialDay comment that a @POTUS has ever made. Self-promotion on a day to remembe… https://t.co/v85iqPzCBI
— VoteVets (@VoteVets)1527514837.0

"Self-promotion on a day to remember the fallen, and wishing those remembering their deceased loved ones a 'happy' holiday is appalling," Vote Vets wrote.

Vote Vets wasn't the only one outraged or noting how absurd the tweet's message truly was.

This is perhaps the most disgusting Trump tweet ever. Memorial Day is a solemn day to reflect on the memories of t… https://t.co/SUDKMU2lH4
— Nate Bell (@Nate Bell)1527513949.0

Daniel Dale, a political reporter for The Toronto Star, pinpointed why — even for Trump — the tweet was uniquely Trumpian.

Trump has a long history of making holidays about him, but this might be the first time he has spoken for dead peop… https://t.co/2oZBKJgqjE
— Daniel Dale (@Daniel Dale)1527513505.0

Ann Telnaes, an editorial cartoonist for The Washington Post, created a illustration that made Trump's words into a damning visual.

Many people question this president, but it’s no small achievement to write the grossest, most inappropriate, most… https://t.co/l99ifIW2Dd
— David Frum (@David Frum)1527512454.0

Even Dictionary.com chimed in.

"Memorial Day is defined as 'a day set aside in most states of the U.S. for observances in memory of dead members of the armed forces of all wars,'" the organization tweeted. "Not found: Economic reports."

Memorial Day is defined as "a day set aside in most states of the U.S. for observances in memory of dead members of… https://t.co/GvEB2XvCmW
— Dictionary.com (@Dictionary.com)1527512825.0

This is the second time Trump has tweeted something incredibly inappropriate on Memorial Day. Why doesn't he get it?

Memorial Day is a deeply personal and difficult day for many Americans.

Some of us haven't been personally affected by the loss of a loved one serving in the military. And some of us have strong opinions about the validity of the wars we've fought and the political motivations behind them.

But Memorial Day has never been about those things — just like it's never been about unemployment numbers, or barbecuing hot dogs, or relishing in a day off from work. It's about remembering those who've lost their lives.

Hopefully our president will understand that by May 2019.