This viral set of tweets about becoming a U.S. citizen will bring a smile to your face. 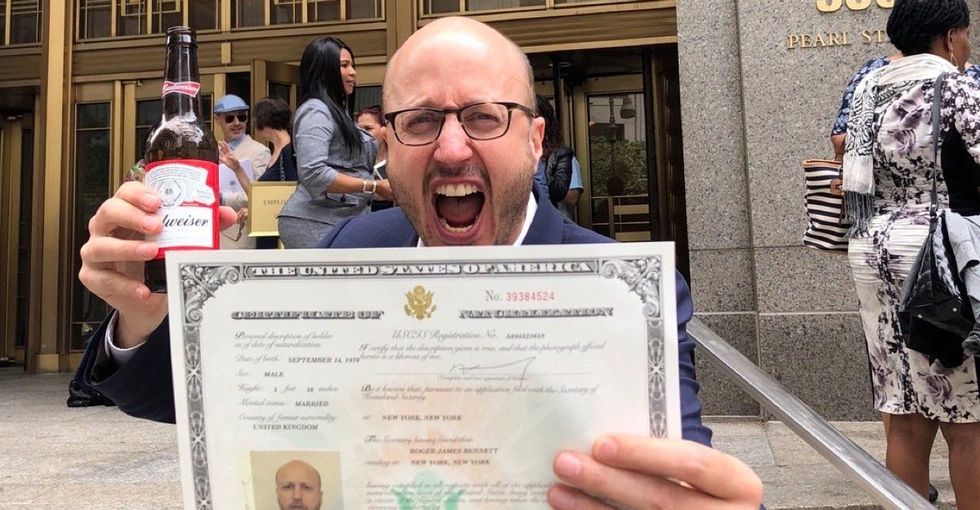 Journalist Roger Bennett joined the ranks of the more than 700,000 people who will become American citizens in 2018.

Bennett, who co-hosts NBC Sports Network's "Men in Blazers" show and podcast, grew up in the United Kingdom. Though he's lived in the United States for some time (he got married here in 2000), it wasn't until 2014 that he committed to becoming a citizen. The process was long and tedious, but on June 1, he realized that goal.

Tomorrow, I will be sworn in as an American Citizen. Just typing those words feels emotionally overwhelming. These… https://t.co/KHL4uLouNi
— roger bennett (@roger bennett)1527794518.0

On Twitter, Bennett shared a powerful story about the many feelings he had about becoming a U.S. citizen in current times.

He begins by sharing the story of his great-grandfather who tried to emigrate to the U.S. in the 1890s only to mistake Liverpool for New York. "That family tale always made me feel deeply connected to America," he wrote.

It may have been the close relationship I shared with my grandfather, Sam, who also adored America. As a kid, we pl… https://t.co/fjGikMxb76
— roger bennett (@roger bennett)1527794519.0

Growing up, his view of America, communicated through pop culture, inspired him to chase his own dreams.

He even used his bedroom to display his patriotism, painting three of the walls red, white, and blue.

on television, showed me it was possible to thrive, in glorious technicolor, in a place where everything felt possi… https://t.co/giVLWiGvVZ
— roger bennett (@roger bennett)1527794520.0

On the fourth I designed a giant mural of the Stars and Stripes, replete with a clumsy approximation of the Manhatt… https://t.co/apgnmEYQPG
— roger bennett (@roger bennett)1527794521.0

After graduating from college, those dreams brought him to Chicago, due in part to his love of John Hughes films — which honestly seems as good a reason as any to choose Chicago.

Amidst my carefully constructed Coke can collection and medley of random sporting pennants, are posters of “Refrige… https://t.co/r3FS8lkGVF
— roger bennett (@roger bennett)1527794522.0

I moved to Chicago right after college, largely out of my love for John Hughes movies. I knew no one, working 3 shi… https://t.co/zbKOdLhrY7
— roger bennett (@roger bennett)1527794524.0

On the day of his naturalization ceremony, Bennett put a fine cap on his family's 130-year journey, calling it the achievement of his lifetime.

He hopes that future generations of his family will think of him and how he was the one who moved the family to America. He doesn't even care if they remember his name.

Naturally, he celebrated his citizenship as any freshly minted American would: with a Budweiser.

He grew up dreaming of an idealized notion of America, and while it may not always live up to the model as it existed in his mind, it's a country he loves. His journey is like that of so many immigrants, just people chasing their dreams and hoping for a better world for their families. Immigrants are what make America great, whether they arrived here in the 1890s (as Bennett's great-grandfather intended) or today.

When we turn our back on immigrants, whether a starry-eyed dreamer like Bennett or someone fleeing persecution in their home country, we turn our back on our own history. Patriotism means pushing the U.S. to live up to the ideals burned into Bennett's memory, not edge toward isolation.

From a Liverpool boy who loved everything American and longed to move there, to a Gent who finally made it 30 years… https://t.co/LZ8uE64qPh
— roger bennett (@roger bennett)1527875656.0