This teacher's thank-you letter to her students went viral because we all needed it.

'I want you to know I'm rooting for you from the sidelines, silently cheering you on, even if it's a decade from now.' 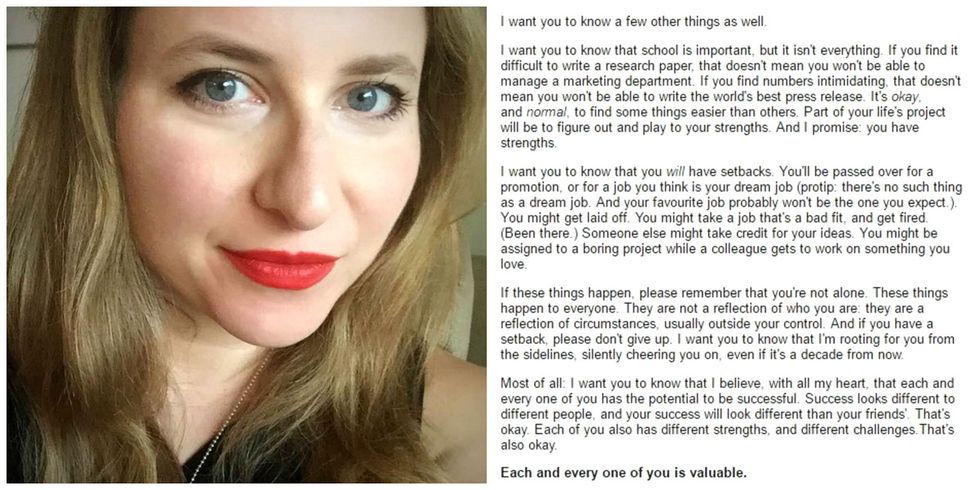 At the end of the creative marketing course Jessica Langer was teaching at Ryerson University in Toronto, she wanted to find a special way to say thank you to her students.

"I've had really great students in the past, but I don't know that I've ever had a group that's so big [about 90] and yet so uniformly great," writes Langer in an email, explaining that her students are "rightfully anxious about the future."

"The creative industries are changing so rapidly," she explains. "It's hard enough to graduate into a field that's stable: to graduate into an industry that's going through such change is anxiety-making. I wanted to give them some reassurance."

She decided to send her students a heartfelt letter, imparting one final lesson.

Her e-mail is an honest depiction of the obstacles and challenges she knows her students will face in the real world.

And not just in their chosen field of marketing either. More than 4 out of 5 students graduate college without a job lined up according to The Washington Post. In 2014, the overall unemployment rate for people under 25 in the United States was 14.5% — more than twice the national average at that time.

Langer concludes the letter by offering a perspective on success and failure that reminds her students not to define themselves by their obstacles or setbacks by writing (emphasis added):

"These things happen to everyone. They are not a reflection of who you are: they are a reflection of the circumstances, usually outside your control. And if you have a setback, please don't give up. I want you to know I'm rooting for you from the sidelines, silently cheering you on, even if it's a decade from now."

In response, Langer's students flooded her inbox with gratitude. One student named Blayne Stone, who had been rather quiet in class, sent her an email that said he would carry the lessons he learned from her with him his whole life. Another wrote a letter to Langer's department asking they keep her on at Ryerson.

One of Langer's students was so moved by the letter that she posted it to Twitter, where it quickly went viral.

Langer's message about personal value resonated far and wide beyond the doors of her classroom. It was a message many people needed to hear.

Being an adult means having successes and failures. In those moments, Langer wants her students — and anyone who reads her letter — to remember that work is not the end-all-be-all of their value as a person.

When there are setbacks, it's important to remind yourself that there are people in your corner you can call upon to give you strength. Perhaps that's why Langer's thank you resonated with so many people; her sentiments represent every teacher and mentor who inspire us to keep pushing forward, even during our darkest hours.

Her letter's conclusion says it all (emphasis added):

"Success looks different on different people, and your success will look different than your friends'. Each of you also has different strengths, and different challenges. That's also okay. Each and every one of you is valuable.

You matter. To me, to your friends and family, and to the world."