This motorist's kind gesture is a reminder that we should all do good. 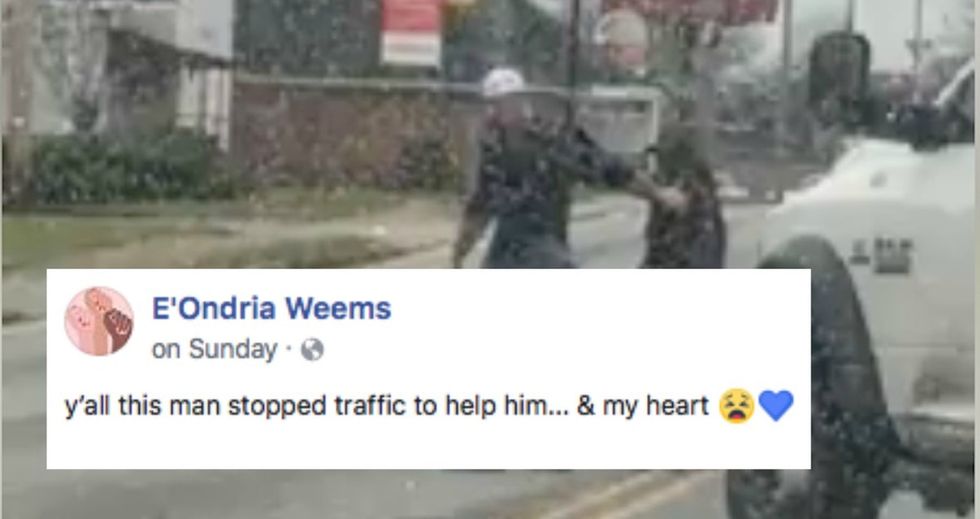 You're headed for work when you see someone stuck on the side of the road. What do you do?

Most of us would probably have to admit that we usually keep driving when we see situations like these. We tell ourselves that the stranded person is probably fine or that someone else will stop.

That’s why this video of a man stepping out of his truck to help an elderly man has already racked up over 6 million views on Facebook and is making headlines around the country.

The clip shows a driver abandoning his truck on a busy street to gently guide a man with a walker to safety from oncoming traffic.

Motorist captures the heartwarming moment a kind driver hopped out of his truck to help an elderly man across a busy road in Griffin, Georgia. The good samaritan stopped traffic to make sure he got to the other side of the street safely.

Since being posted on March 11, the video’s been gathering attention from the masses.

And while some people seem to have taken the moment to preach about traffic safety (there’s always someone!), most reacted by commenting on the motorist’s humanity and good-heartedness — two things we all need more of in our daily lives.

E'Ondria Weems, the woman who shot the video, told local news station 11 Alive in Atlanta that she was concerned about the elderly man when she saw him trying to make it across the street. But before she could do anything, she said, the truck driver already had things in hand, making the man’s safety his top priority.

"It was so nice of him to do that. Makes you think there are still nice people in this world," Weems told the station.

What’s extraordinary about the video is just how ordinary it is.

Justin Jackson, the man who’s since been identified as the good Samaritan, said he wasn’t doing anything special. "The old man was walking across the streets and people were flying by and I was like 'l got to stop,'” he told 11 Alive.

We all know we should help other people, but we’re often too busy or preoccupied to notice all the small good deeds we could be doing to make each other’s lives easier.

Often, we become so caught up in global issues that we forget about the change we can effect in our own communities.

That’s why the acts of people like Justin Jackson and Evoni Williams — the Waffle House waitress who recently got viral attention after helping a man cut his food — are so important. They’re reminders that we could all be doing better and helping our fellow people.

And what we do doesn't have to be huge. As Jackson proves, it could be as simple as taking 30 seconds out of your day to steer someone to safety.

Take a look around as you go into the world today, and if there’s a chance for you to be kind to someone else, take it. Sure, a camera may snap the incident and turn you into a viral celeb for a moment, but the support you’ll provide and the reminder that the world can be a kind place is worth way more than any other attention or reward you might receive.