This model was bullied for her dark skin. Her story is all too familiar. 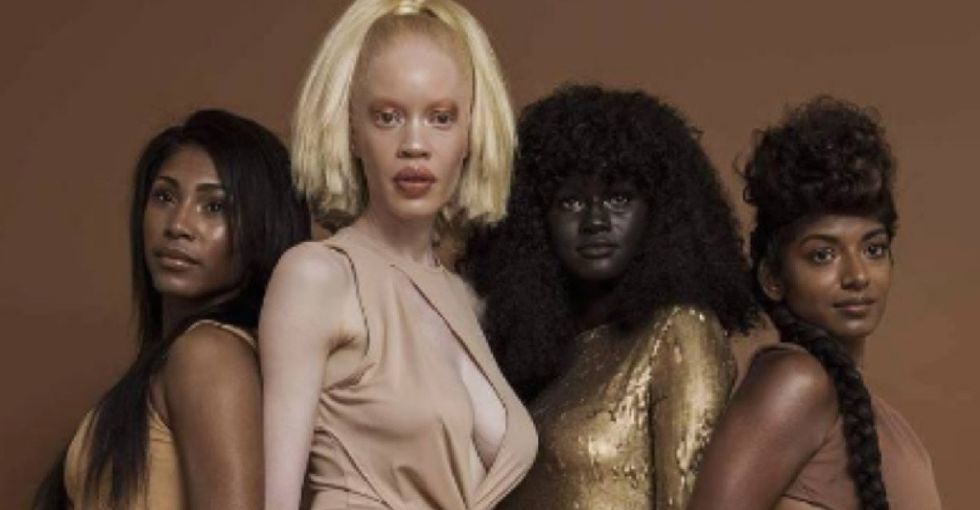 I can't take my eyes off Khoudia Diop's beautiful skin.

Even in pictures, it's easy to get lost in it. Deep and rich, like a thousand night skies. She refers to herself on Instagram as the "melanin goddess," which would normally be boastful and trite, if it weren't so clearly true.

But not everyone sees her beauty, or her worth. Diop was called names and bullied for her skin color as a kid.

“Growing up, I faced it by confronting the bullies," she told The Daily Mail U.K. "As I grew, I learned to love myself more every day, and not pay attention to the negative people.”

Today, the 19-year-old is leaning into her unique, stunning complexion by working as a model. Her 303,000 Instagram followers can't get enough of her striking look.

"If you’re lucky enough to be different, don’t ever change," she said.

Though Diop wrote her own happy ending, bullying around colorism is all too common and rooted in historic and systemic issues.

Colorism is the false and outdated notion that the closer people are in complexion to the white or fair-skinned ideal, the better. Complexions that are closer to white are seen as prettier, smarter, more worthy of time, and more worthy of attention. But too often this leads to bullying and discrimination for people of color with darker complexions, from within and outside the same racial or ethnic group.

This issue is complex and has deep historical roots.

Slaves with lighter skin were often assigned to work in the house, while slaves with darker complexions were sent to the fields. This practice continued for decades, turning into discriminatory exercises like the paper bag test. That's where a brown paper bag was used as a kind of "skin-tone barometer" for privileges, like access to certain churches or black Greek life at colleges and universities. Those lighter than the bag were welcomed in. Darker than the bag? Not so much.

But as stories like Diop's illustrate, colorism is not just a thing of the past, and it affects people of color of all complexions. Those with lighter skin may find others challenging their authenticity and their "black experience." Men and women with darker skin or coarser hair may not see themselves represented in the media, specifically as love interests or idealized depictions of beauty.

And colorism is a difficult thing to combat because this type of prejudice and internalized racism begins when we're young.

In 2010, Margaret Beale Spencer, a leading researcher in the field of child development from the University of Chicago, was recruited by CNN to recreate the famed "baby doll test" from the 1940s.  In the original, black and white children were asked questions about whether they favored a white doll or a white doll painted brown. The results showed both white and black children had a bias toward the white or lighter skin doll.

When Spencer conducted a version of the test more than 60 years later, though, she found that the results had changed, but not by much. White and black children still have white bias, though black kids have far less than their white peers.

It's a grim reminder that historical, external, and media-driven forces behind colorism are having an impact on all of us, no matter our race or ethnicity.

That's why people like Khoudia Diop are so important.

Watching Diop, and stars like Viola Davis and Leslie Jones, find success in their respective industries is a strong indictment against the narratives that women with dark skin are undesirable or unworthy of admiration or respect. But it doesn't mean their journeys are easy or smooth. All of these strong women experience bigotry and ignorant comments, not just from the dregs of the internet, but from critics who should know better too.

Colorism is real. We live it every day. And speaking out and talking about it, like Khoudia Diop, is the first step to putting an end to it.

Whether or not you're a famous face, it's important to speak out against colorism.

Check your friends and family when they make ignorant and prejudiced comments. Support brands, magazines, and movies that showcase people of color with darker complexions. Signal boost voices when those who've been discriminated against are brave enough to tell their stories. Buy dolls and picture books with protagonists of color for the children in your life.

There's a lot we can do to weaken the hold colorism has on our society so more folks like Diop can rise to the top of their fields.  And it starts with all of us.