This men's talk show got uncomfortably candid about #MeToo. It's a must-watch.

'We need to understand that having good intentions is not enough.' 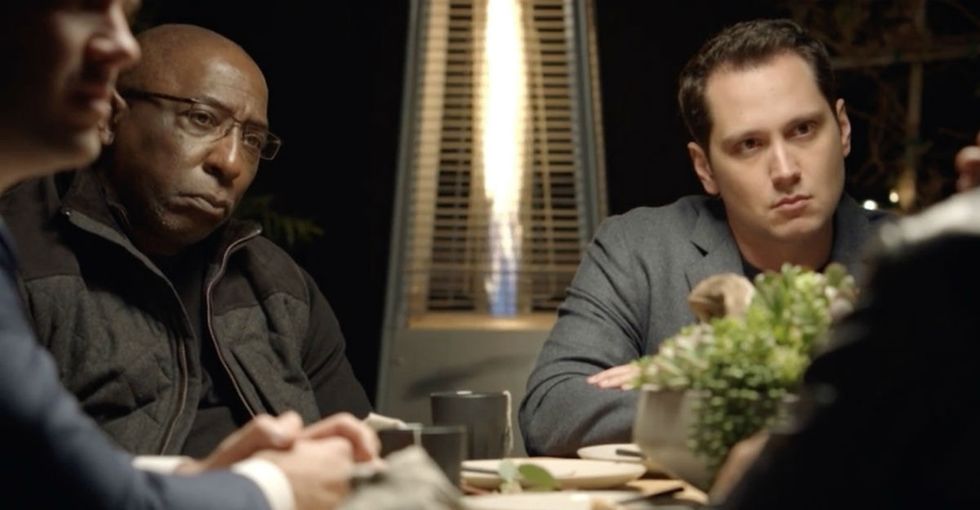 Warning: The video and article below discusses sexual violence and rape.

The guys who participated in the episode's roundtable — Justin Baldoni, Matt McGorry, Lewis Howes, Jamey Heath, Tony Porter, and Scooter Braun — opened up about their own shortcomings and experiences with sexual abuse and how, exactly, men can be part of the solution.

It's worth a watch, for men especially. Here's the full episode (story continues below):

How can we learn from #MeToo to shape the next generation of men?Join the conversation with Justin Baldoni, Matt McGorry, Jamey Heath, Lewis Howes, Scooter Braun, Tony Porter, Karen Alston, Alma Gonzalez and Yazmin Monet Watkins.Stay tuned after the episode for a special message from our partner, Child Safety Pledge.#ManEnough #Harrys #ChildSafetyPledge

McGorry, who stars in ABC's "How to Get Away With Murder," chatted with me about the episode, which he helped produce alongside Baldoni. (Baldoni's company, Wayfarer Entertainment, launched "Man Enough" in 2017.)

"Man Enough" is such an important and terrific show! What was it like personally being a part of the episode on sexual abuse and #MeToo?

Thank you so much. The support means a great deal and I am truly honored to be a part of this show, both on-camera and as a producer. This episode in particular is of great importance. It is one of the pieces of work that I am proudest to have been a part of in my career.

We are at a fork in the road: We can either pat ourselves on the back for clearing the extremely low bar of not being an abuser, or we can take on the challenge of understanding that we have a responsibility to actively be a part of the solution.

Porter and McGorry participate in the roundtable on #MeToo and sexual abuse. Image by "Man Enough"/Wayfarer Entertainment.

In the episode, you mention fame or power can be "intoxicating" because women may approach you differently. What advice would you give to men to keep that intoxicating feeling in check and treat women respectfully?

Positive feelings based on receiving attention are quite natural and are not, in and of themselves, problematic. But what we choose to do based on these feelings really forms who we are and who we become.

"We need to develop the ability to self-reflect and to listen to the voices of women. We need to understand that having good intentions is not enough."

As men, we rarely have to think about what life is like as a woman. A lifetime of messaging about what constitutes being a "real man" has taught us to distance ourselves from anything that is seen as feminine. Combine this with the constant dehumanization of women that is largely invisible to men, and you have the perfect cocktail of traits that will pull us into treating and thinking about women in problematic ways.

In order to counteract this, we need to develop the ability to self-reflect and to listen to the voices of women. We need to understand that having good intentions is not enough. While good intentions are important, it is the impact of our actions that we really need to work on examining.

You noted that even the language men use when dating or simply talking to women can be harmful — like "getting women," for instance — by taking their agency out of it. Why do you think shifting the language we use is so crucial?

Language is important because it represents how we think and what we value. I have found, in conversations with men about subtle and not-so-subtle uses of sexist and dehumanizing language, the wording is often indicative of underpinnings of sexist beliefs. And to be clear, I'm not saying this automatically makes someone a bad human being, but I am saying that it's a part of the larger fabric of a society that dehumanizes, objectifies, and devalues women.

I am not saying that using the "right words" is the #1 solution to getting rid of sexism, but I do believe it's a great way into the conversation. Our socialization that teaches us to value men above women is never-ending, and thus, our process of questioning and evolving must also be.

Did you ever have some kind of aha moment or experience an event that challenged you to think differently on gender and sexism?

There were a few events that made me question what I knew. The first was in reading a book by a woman about her experiences in the workplace and how they were defined by sexism. I was honestly baffled by the fact that I had never known or considered how different my experience was simply because I was a man. The fact that I had such a glaringly large gap in understanding, when I thought of myself as an introspective and perceptive person, really rocked me.

After reading the book, I was in a relationship with a woman who was an entrepreneur looking to start a business. She called me one night, frustrated and beaten down by the bullshit she had to deal with by the men she was hoping would invest in her company. Lunch often was rescheduled into late-night drinks, and she constantly had to walk a line of being friendly enough that she wouldn't be labeled "cold" or "bitchy" but not so friendly that she was considered "a tease" or "leading them on."

I was deeply angry but felt frustrated that I didn't know what to do other than expressing how sorry I was that she had to go through this, knowing that I would never have to.

"There is so much brilliance in marginalized voices that so often gets ignored by those of us with privilege."

Not long after, I watched Emma Watson's He for She address to the United Nations. And the often-quoted closing line that was an invitation for men in to the fight for gender equity was to ask ourselves, "If not me, who? If not now, when?" It was at that moment that I felt overwhelmed with a sense that I had to try and be part of the solution.

Being a part of the solution is often a much slower, nonlinear process. And some of the most important parts of this work are less glamorous because they are rooted in self-examination and a willingness to have difficult, uncomfortable conversations with other men who are likely to be defensive.

If I really wanted to be a part of the solution, I had to be willing to listen to what women on the forefront of the movement for equality had been asking us to do. And in the feminist movement, that work ascribed to men was often about re-educating ourselves, examining our own biases, and changing traditional male culture in this same way.

Porter and McGorry participate in the roundtable on #MeToo and sexual abuse on "Man Enough." Image via Wayfarer Entertainment.

You're a big reader. Any good books written by women that you would recommend for men to pick up if they're new to understanding allyship?

Absolutely. Without realizing it, we men watch TV or film, read books, and consume culture that is predominantly created by men. Because of the nature of structural sexism, women — and especially women of color because of the added layer of racism — get less opportunities than male creators do, and so we become used to seeing everything through a male and white lens. And this is an integral part of our socialization as people.

There is so much brilliance in marginalized voices that so often gets ignored by those of us with privilege. A question that I have been asking the other men and white people in my life more and more is, "When was the last time you read a book by a woman? How about a woman of color?"

We are trained to think that books about feminism are for women and that books about race are for people of color. But it is actually men and/or white folks who have the most to learn on these topics, and I truly believe that we cannot reach our fullest potential without consciously and consistently including these perspectives into our lives.

Some of the books by women that have been impactful to me include "The Will To Change: Men, Masculinity, and Love" by bell hooks, "Sex Object: A Memoir" by Jessica Valenti, "Women, Race & Class" by Angela Y. Davis, "The Mother of All Questions" by Rebecca Solnit, and "Bad Feminist" by Roxane Gay.

Understanding the role that men play in ending violence against women and girls is important as well. In addition to the ones listed above, the following are books by men about how we are socialized and our role in ending sexism: "Men's Work: How to Stop the Violence That Tears Our Lives Apart" by Paul Kivel, "Breaking out of the Man Box: The Next Generation of Manhood" by Tony Porter, and "Angry White Men: American Masculinity at the End of an Era" by Michael Kimmel.

"I wholeheartedly believe in the ability of conversation to shift culture and create change."

What are your hopes for this episode of "Man Enough," in regards to what men take away from it?

My hope for men watching this episode is that they feel moved and inspired to become a part of the solution; to see themselves reflected in the guests of the show, as well-intentioned men who want to be better; and to come away with ways of really starting to notice and examine all of the things we don't even realize are invisible to us, but that form the basis of a society where women and girls are abused at epidemic rates.

I wholeheartedly believe in the ability of conversation to shift culture and create change. And I hope that men will share it with the boys and other men in their lives to create more of those conversations.

When I began this journey four years ago, I thought that it was something I was doing for other people. What I didn't realize was the transformative power that it would have over my own life. And it is my deepest hope that men realize that our own humanity is on the line here as well.