This kid's dad is just as bad as the bullies at school, until he makes me smile at the end.

Doesn't seem fair that some kids get laughed at for who they are inside. 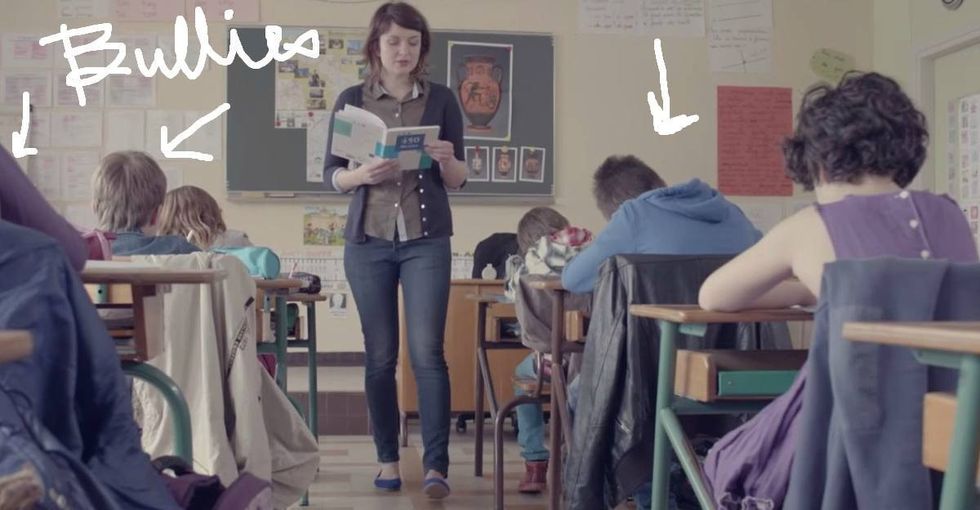 Especially when it's because who they are inside doesn't seem to match who people assume they are on the outside.

P.S. This mom is understandably angry and upset, but I'm not a fan of the portrayal of her as aggressive and physically violent.

Gender norms are complex and antiquated things. We are starting more and more to understand that gender is a spectrum and that we can't assume we understand or know someone's gender identity based on the sex they appear to be.

People often argue that kids can't know what gender they are at ages as young as 3 or 5 ... but I would argue that kids know a heck of a lot more about themselves than we know about them. Who are we to judge each other based on what we assume we know? Nothing good can come of that.

In fact, the consequences of that judgment and rejection can be deadly. Teenager Leelah Alcorn was 17 when she apparently stepped in front of a truck and died. In her suicide note, she talked about her parents trying to "fix" her.

"The only way I will rest in peace is if one day transgender people aren't treated the way I was, they're treated like humans, with valid feelings and human rights. Gender needs to be taught about in schools, the earlier the better. My death needs to mean something. My death needs to be counted in the number of transgender people who commit suicide this year. I want someone to look at that number and say "that's fucked up" and fix it.

It's possible that if Leelah had lived, she would have transitioned to living as a woman, which for her may have meant her life would totally change. Some say it is a selfish decision; others say it simply is not a decision. It's who they are and always have been. Joy Ladin, who is the first openly transgender professor at an Orthodox Jewish school, speaks to this:

"It looks to people like a choice. And it's clearly a choice that was terrible for my family, it was terrible for my wife, it broke up my marriage, it broke up my children's home. ... It really wasn't good for anybody particularly, except for me. So, if I chose to do something that was bad for everybody but me, that's an act of radical — even sociopathic — selfishness ... but to me ... there was no one else I could be. It wasn't a selfish choice. It was a choice between living or dying."

She goes on to talk about how she seriously considered suicide for many years, but thought transitioning into living as a woman was a better option for her family. Joy was in her 40s when she transitioned.

The image of the father wearing a dress and accepting his child is so powerful, and the destructive nature of his rejection is also very real. I hope parents see this and realize that acceptance really can be a matter of life and death for their child.

Here are the lyrics to that beautiful song by HollySiz:

Let the light come through us


Let the shout-outs locked up in our mouth

Let the shout-outs locked up in our mouth

Let's believe in our minds