These disabled animals want to teach your kids about compassion and empathy.

"You will never get someone to blossom without attention and love. If you want to change somebody, treat them kindly." 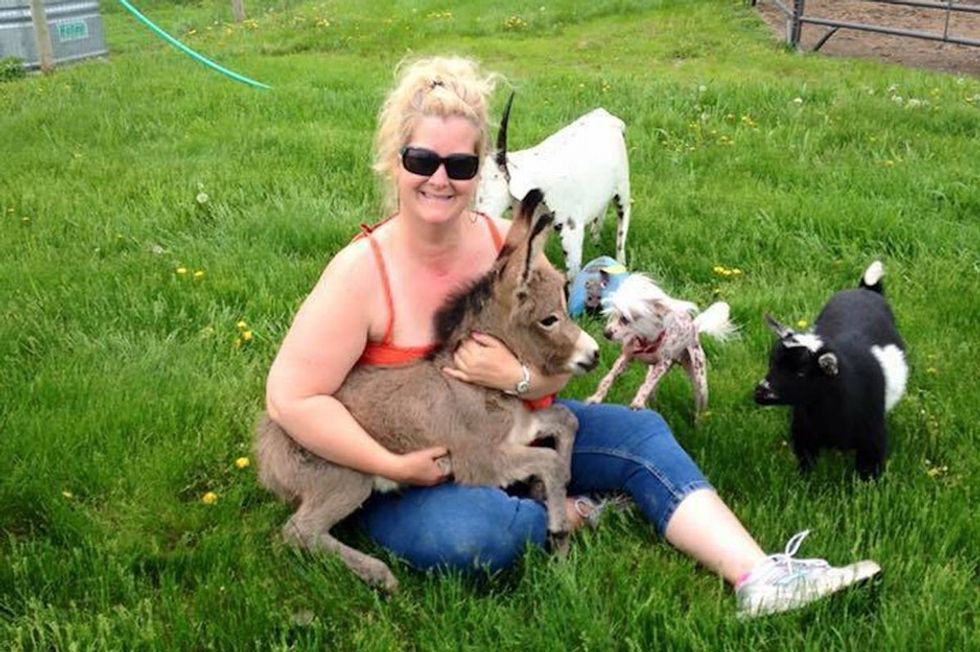 He was homeless, living on the street scavenging for food. He was bullied constantly by other dogs — even attacked violently. After losing the use of his hind legs to an injury, Joe had to drag his lower body along the ground when he wanted to move. He was vulnerable, angry, frightened — and a target. Then one day, G.I. Joe was rescued. He was given love, time to heal, and a wheelchair. It's taken years, but empathy and compassion have transformed him. Take a look for yourself:

Now, Joe has a new mission: using his experiences to help teach young kids to prevent bullying by using empathy and compassion.

That’s the idea behind Alison Smith’s Compassion Crew, a little team of dogs and cats with disabilities that team up to help kids understand the abstract concepts of empathy and compassion — and put them to work.

As many adults well know, empathy and compassion aren't skills we're necessarily born knowing how to use well. As the Compassion Crew demonstrates, sometimes the "people" who have the best chance of teaching kids how they work aren’t even people at all.

Smith didn't have the Compassion Crew in mind when she opened her sanctuary farm, Triple H Miniature Horse Rescue, more than a decade ago.

"When I told my accountant that I wanted to open a rescue farm for miniature horses, he laughed at me," said Smith. "He was concerned whether we'd be providing a service anyone needed. I told him if we never rescued a miniature horse, then that was good news since they were clearly all safe and well cared for."

Alison Smith and some members of her multiplying menagerie.

The Triple H farm welcomed its first two miniature horse rescues — Pebbles and Coco — two days after they opened their doors. Since then, they've rescued more than 500 horses and many other animals, including goats, sheep, ducks, chickens, rabbits, and, of course, cats and dogs.

In the winter of 2015, it occurred to Alison that in addition to healing from bullying, the animals at Triple H might be able to teach others a thing or two about bullying itself.

"Kids are sick and tired of hearing about the same old bullying speeches from teachers," said Smith. "I wanted to reach kids in a different way, and introduce them to animals with disabilities. I wanted to tell them why they shouldn’t bully, but also tell them how and show them."

That spark of an idea became the five-member Compassion Crew, where each member has a special message to share.

As a survivor, G.I. Joe has a lot to teach kids about how being the victim of bullying can change us. While G.I. Joe is full of love most of the time, he can still be fearful and even aggressive around other dogs.

"That doesn't make him less lovable," Smith noted. "It teaches kids that being a bully doesn't always happen because someone is just mean. Sometimes really mean things happened to them that made them that way. And G.I. Joe gets better every day because we show him empathy and compassion."

There’s Max, a little 7-year-old shih tzu with a custom wheelchair of his own.

Max may only have three legs, one eye, and half a jaw, but he's still the cuddliest love bug you'll ever meet.

Max's owner didn't give up on him when he was hit by a car; she helped him recover and got him his wheelchair. But after she passed away, Max didn't have a home, so he came to Triple H.

"We like Max because he shows how we can be different and still be loving and nice."

There’s Roy, who was left in a tiny aquarium at a mall pet store, overlooked because of a terrible haircut.

13 years later, Roy is a dashing, handsome poodle who catches lots of eyes. As a member of the Compassion Crew, he's a reminder that judging others by their looks — like bad haircuts or strange clothes — doesn't give them a chance to show us what they're like inside.

"Think of your best friend," Smith said. "Imagine if they were wearing something weird, or had bad hair when you met them. Would you have decided they weren't worth being friends with? Think of all the wonderful memories and experiences you'd have missed!"

There’s Mowgli, who showed up at Triple H rescue one day with untreatable infections in both eyes and now thrives without them.

Mowgli enjoying some time in the autumn leaves.

And then there's Martin, a young Labrador cross puppy with boundless love for everyone he meets — even though, like Mowgli, he can't see them.

Martin sits like the very good boy he is.

"Martin loves everyone. He doesn’t care if you’re tall, skinny, have weird hair," gushed Smith. "The only reason he wouldn’t like you is if you treated him badly. Because he can’t see, he can’t prejudge you on your appearance, or make an opinion. He likes you because you’re nice to him."

Very soon there'll be another member of the Compassion Crew, a young mother cat named Nina.

Little Nina and one of her wee kittens.

She was found in the middle of a dusty backroad, huddled atop her three tiny kittens. Nina’s recovering from an eye infection, and she has a birth defect that splits the hemispheres of her lovely little face. She doesn’t look perfect, but she’s a loving mom.

So far, Smith’s Compassion Crew has only visited one school — Highland Acres Elementary.

"When we went to Highland Acres, we said we could stop bullying in 30 seconds or less — if they use empathy and compassion," recalled Smith. "We told them that all of us have superpowers and they’re called empathy and compassion. It was crazy the effect it had on these kids. I didn’t expect that."

From the many letters Smith received afterward, it was clear the visit really resonated.

One of many thank-you letters Smith received.

Starting this winter, Smith will start reaching out to other schools that could welcome the Compassion Crew. "I feel like empathy and compassion are going to be the ticket in turning some of these kids around," she said.

"You will never get someone to blossom without attention and love. If you want to change somebody, you have to treat them kindly. That's true for bullies, too."