There's a ginormous Jeff Goldblum statue in London. It's as gloriously weird as it sounds. 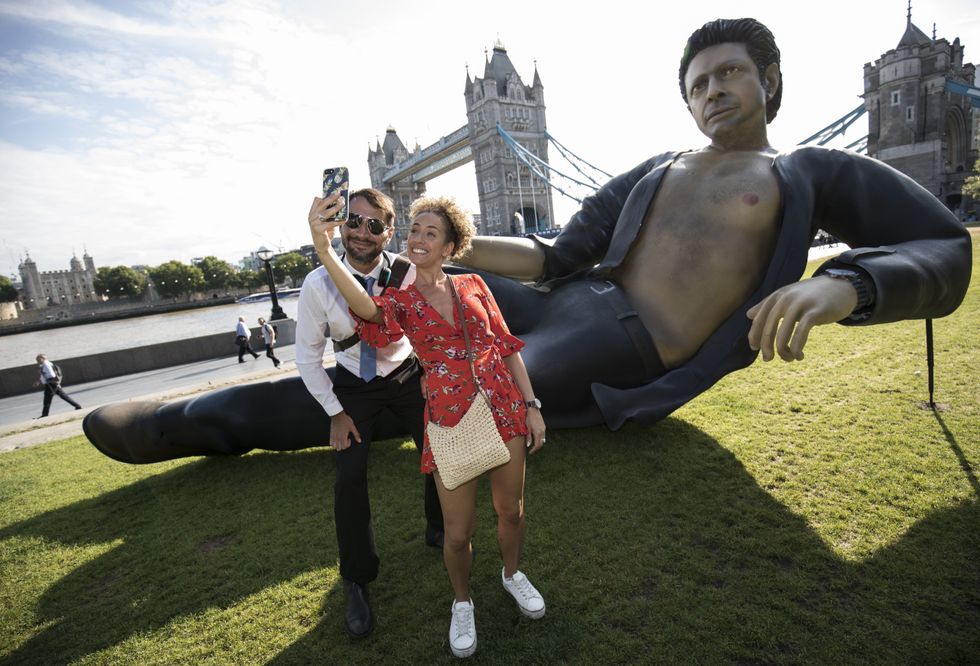 Yep, that's right. On Wednesday, July 18, Twitter users reported seeing a 25-foot statue of Jeff Goldblum in front of Tower Bridge in London. The effigy features the "Jurassic Park" actor half-naked and lying down. It's also quite detailed.

There's a giant Jeff Goldblum statue down by Tower Bridge. It's a bit far-fetched but you should stick with it for… https://t.co/YWOpFi0OBA
— Gav Murphy (@Gav Murphy)1531919285.0

The Goldblum statue has already attracted the attention of a lot of locals and visitors.

So, a massive Jeff Goldblum has appeared by Tower Bridge. Your scientists were so preoccupied with whether or not t… https://t.co/I9mkkdWrc6
— Tony (@Tony)1531903397.0

While most are taking selfies, some are bringing their lawn chairs over and are taking a longer look at the masterpiece.

If it isn't clear already, the huge statue is a publicity stunt done by a United Kingdom based television company.

NowTV erected the statue to celebrate the 25th anniversary of "Jurassic Park." The company confirmed it on Twitter.

According to NowTV, the statue weighs about 330 pounds — or the alternative measurement of 48,000 tea bags.

The statue replicates a scene in the first "Jurassic Park" movie where a sweaty Ian Malcom (Goldblum's character) leans on his side with a broken leg after having run away from a dinosaur.

Goldblum has certainly become a cult favorite over the years.

He has been the subject of numerous memes and a two-month film festival, and people are even having his face tattooed on themselves. The actor is considered to be "effortlessly stylish, totally eccentric, and disarmingly charming." And it's no secret that quite a lot of fans find Goldblum rather sexy.

Jeff Goldblum talks like my aunt does when she's distracted dresses like my college poetry professor and is so so sexy HOW.
— Suzanne Wallace (@Suzanne Wallace)1520978445.0

While a giant Goldblum statue is a bit absurd, there are a few good reasons to justify its presence.

"The fact that you’re objecting to these very simple and reasonable asks feels to me like you might be some of the worst, most execrable, selfish, reptilian nincompoops with whom I’ve ever had the distinct displeasure of working," the actor said.

One thing that makes Goldblum is so special is that he's able to find positivity in a world that sometimes feels downright chaotic.

In an interview with "The Late Show's" Stephen Colbert, Goldblum offered some advice on how to stay optimistic the night after Donald Trump's presidential win.

"Being inspired, encouraged, brave, bold, and active into the progress of your own future — and everyone’s future — depends on you," Goldblum said. "That’s in your circle of influence and I won’t be uninspired by this. I’m not going to say ‘If I lose, the whole thing has been a waste of time.’ That’s stupid, in my opinion."