The Trump administration's latest anti-transgender slam should have people outraged.

Get out and vote, especially in your local elections. 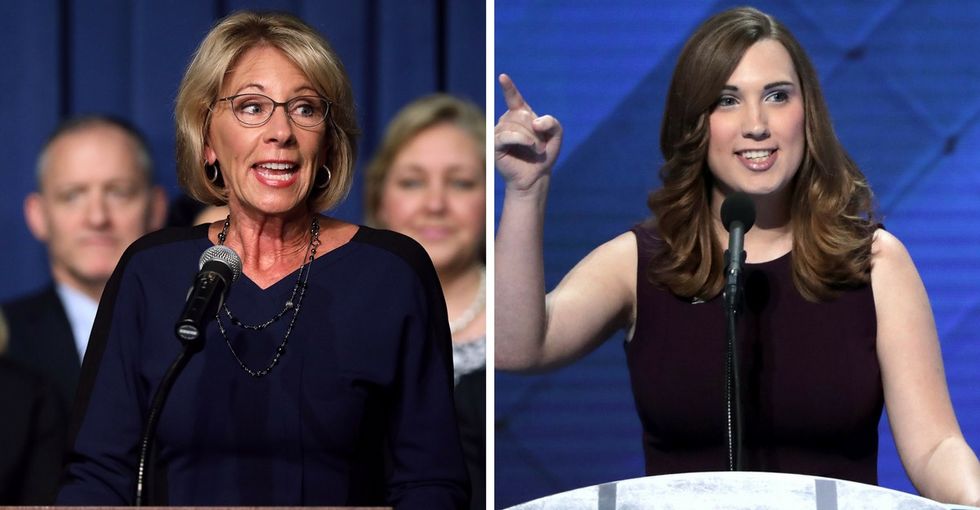 Back in February 2017, newly appointed Secretary of Education Betsy DeVos wiped out a lot of work done to protect transgender students in schools.

It seemed a simple position-statement move at the time. Just months before, guidance had been put in place with an Obama-era "Dear Colleague" letter that instructed schools not to discriminate against students on the basis of gender identity. It was meant to clarify the government's interpretation of Title IX of the Education Amendments of 1972 and end patchwork policies and lawsuits involving transgender students.

DeVos, however, had argued that schools' transgender discrimination issues are best "solved at the state and local level" and left only vague steps to take, if any, to ensure trans students have the same access to a quality education as other students.

DeVos at the Department of Education on Feb. 8, 2017. Photo by Chip Somodevilla/Getty Images.

It was a huge blow to the trans community, leaving trans students more vulnerable than ever.

But now, a year has passed, and the Education Department is clarifying its position. And it's not good.

According to BuzzFeed reporter Dominic Holden, Education Department spokesperson Liz Hill said on record that it's the agency's position that restroom-related complaints from trans students are not covered under the law. This step, in explicitly saying that the law doesn't cover trans students, goes beyond simply rescinding the Obama guidance.

It is worth noting that a number of federal courts have found that bans on sex discrimination do cover gender identity, in contradiction to Hill's assertion. And while the Education Department's statement doesn't actually change the law, it has the potential to embolden anti-trans bullies and to encourage districts to flout the court rulings.

Parents of trans students have been heartbroken by what has unfolded from DeVos's first actions — especially ones who met with her.

After DeVos rescinded the "Dear Colleagues" letter, student LGBTQ issues defender GLSEN arranged a meeting between DeVos, a handful of trans students, and their parents.

"She sat across the table from our family and two other families and expressed deep concern over the well-being of transgender students, like my daughter Ellie," said Vanessa Ford, a mother of a 6-year-old trans child, in a GLSEN press statement. "[She ...] looked me in the eyes and assured me she had my daughter’s safety in mind. However, today’s actions make it clear DeVos’ Department of Education has no desire to protect Ellie or the thousands like her."

Another mother, Katharine Prescott, lost her trans child to suicide and calls the Education Department's latest stance appalling and a tragedy.

"Barring a student from using the facilities that align with their gender identity is discrimination," Prescott said in the GLSEN statement. "If a transgender girl is forced to use the boys’ room at school, it places their safety and well-being in jeopardy. This denies her basic right to a public education. This administration continues to fail to protect our most vulnerable students."

And these students are extremely vulnerable. PFLAG's executive director, Jaime M. Grant, reacts to this new Title IX stance with a plea of understanding that the high rates of self-harm among transgender youth is not self-hatred but societal frustration.

"Those numbers are a result of seeing no possible path to grow a life, not the result of hating one’s gender," Grant writes in an email. "If I can’t use the facilities in elementary school, how am I going to get to college? Hold a job? Get an apartment? Find friends and loved ones? If my teachers won’t take a stand for me, who will? These are the questions constantly confronted."

Even though some aren't tuned in to trans students' issues, this slide into discrimination ties into a number of other topics.

Human Rights Campaign press secretary Sarah McBride argues the Trump administration's fight against trans students is simply one part of a larger ongoing effort to undermine marginalized groups. In an interview, she says, "When you turn your back on transgender students merely trying to get through the school day, you're undermining their ability not just to succeed academically, but to pursue their dreams, and that has a lifetime worth of consequences."

"If you're not part of the transgender community, you are likely part of some community that this administration has fought to undermine access to a quality education for. When they attack transgender students, it also makes it easier to attack students with disabilities  and survivors of sexual assault, and certainly those at the intersection of all of those identities."

Critics of trans-inclusive policies often argue that the trans community makes up just a tiny fraction of the whole and therefore isn't worth protecting.

MJ Okma, the associate director of news and rapid response for GLAAD, an LGBTQ media watchdog organization, thinks that's the wrong way to think about it.

"The transgender population is larger than most people ever realize," he says, "but even if you want to brush it off as a small community, nobody should have to live in fear of being denied the ability to meet basic physical needs at school." Especially, he explains, when there's no evidence transgender students' bathroom use puts anyone else at risk.

In any case, though, it shouldn't be so hard for adults — especially those in our government charged with the responsibility to look out for all our interests — to grasp the concept of empathy. Okma gives great insight:

"One way I try to explain this to cisgender people is by asking them to think about one thing that made you different in grade school, then imagine that core aspect of yourself being debated, attacked, and demonized in a public forum. Then imagine going back to school to facing your peers day after day while this is happening."

There are things you can do to help ensure that all students have access to a quality education, regardless of gender identity, race, religion, disability, or other factors.

McBride calls on allies to the trans community to "be the heart that Betsy DeVos clearly lacks and step up and speak out for transgender students."

"The policies impacting trans students aren't just made in Washington, they're made in state capitals and in school boards and city halls across the country." Fighting for equal rights on a local level can be tough, especially when there are anti-LGBTQ groups like the Alliance Defending Freedom (the name is a bit of an inaptronym) suing any school district that follows DeVos' advice in determining policies for trans students that work best for them. To add a dash of irony to the story, it's important to note that DeVos and her family have long been major ADF donors.

"We need people to vote, not just in presidential elections or midterm elections, but in school board elections and [local] elections," McBride says. "Those institutions can and should step in to support trans students if they're not already."

Nicole Maines at the 2016 GLAAD media awards in New York City. In 2014, Maines won a discrimination lawsuit against her school district. Photo by Rob Kim/Getty Images.