The therapy dogs that helped the Parkland survivors got their own yearbook page, and yes, we're crying. 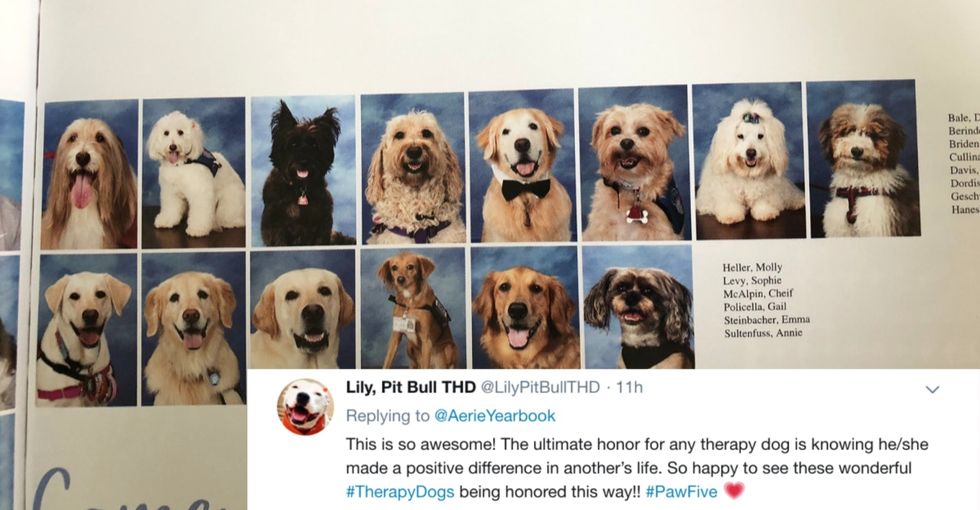 Post Traumatic Stress Disorder (PTSD) can take many forms, affecting both the body and mind years after the inciting incident. There are several forms of therapy that have been proven helpful for those living with it, but one that brought a great deal of comfort to the Parkland students involved 14 adorable, four-legged friends.

These therapy dogs have been a staple at Marjorie Stoneman High School ever since the shooting, acting as non-intrusive, comforting, mobile support systems that students can turn to whenever they need. The students have dealt with a number of distressing situations post-shooting, including the suicides of two Parkland students just this spring, and the pups have played an important role in helping them cope with all of it.

So, on makeup picture day for this year's yearbook, the students decided to honor the 14 dogs by giving them their own page.

"It was such a mood lifter," rising editor-in-chief Caitlynn Tibbetts told Buzzfeed News. "Including them was a really good representation of our school and what we have gone through. Seeing them is something we look forward to every day. These dogs are going to be there until the last of us are gone."

Last year, the yearbook staff appropriately dedicated much of their pages to the students and faculty they lost. This year, however, they wanted to highlight the things that have been instrumental in keeping everyone going. Obviously, the dogs are up at the top of that list.

We’ve included these cuties in the yearbook 🐾🐾

"There's nothing a dog can't fix," Sarah Lerner, an English and journalism teacher and the yearbook adviser, told Buzzfeed. "I'll be teaching and in comes a dog and these big 18-year-old adults all of a sudden become mushy 5-year-old kids and it's been such a comfort for us."

Some have even acted as prom dates.

After the initial yearbook photoshoot with the dogs went viral last October, some have gotten quite the following. Chief, for example, has almost 1,900 followers on Instagram.

Stop by and sign my yearbook. I’m waiting to see you and give you some love. I will be here during both lunches.

Grace Goodwill, aka "therapydogprincess" can also be seen wagging and snuggling up to students as MSH on the 'Gram.

But it's not about fame and fortune for these dogs — they're just happy to get some good scratches from the students who seem to get just as much of a high from the experience.

I’ve figured out how to get FREE weekly massages and they are truly the best. Especially with the long fingernails going down my furry back. I hope all my friends are having a fabulous Spring break. I miss you and I’m not going to lie, I’m missing this week’s massage. Let me know what you’re doing this week. . . . . . . . . . #msd #msdstrong #therapydog #highschool #labradorretriever #dailylab #chiefthebaby #labradorsofinstagram #yellowlabrador #yellowlab

Therapy dogs can be instrumental in helping those living with PTSD heal, but their presence at MSH is also a sad reminder of the horrors the students and faculty experienced just over a year ago. No one should ever have to live through what they did, but it's good to know that, if and when it happens again, comforting, fluffy resources like them are out there.

Forget Congress. It's the annual 'Fat Bear Week' election and everyone needs to vote right now.

Now, this is body positivity.

It's Fat Bear Week and we pick the winner.

Everyone knows that fat animals are infinitely more visually appealing, much to veterinarians' collective dismay. They may not be at their pinnacle of health, yet we love them anyway, especially when they're babies. Bears, however, are supposed to get chunky so they get a pass. Before the winter when they hibernate, they're all about feeding their faces and storing fat for the winter. Wildlife archivists Explore has put all these fat bears in one place so we can vote on who gets to be supreme Fat Bear. Fat Bear Week is an annual event that anyone with internet access can participate in.