The president has a superpower he uses only when he absolutely has to. He just had to.

It's time to dance, but keep your street shoes handy. 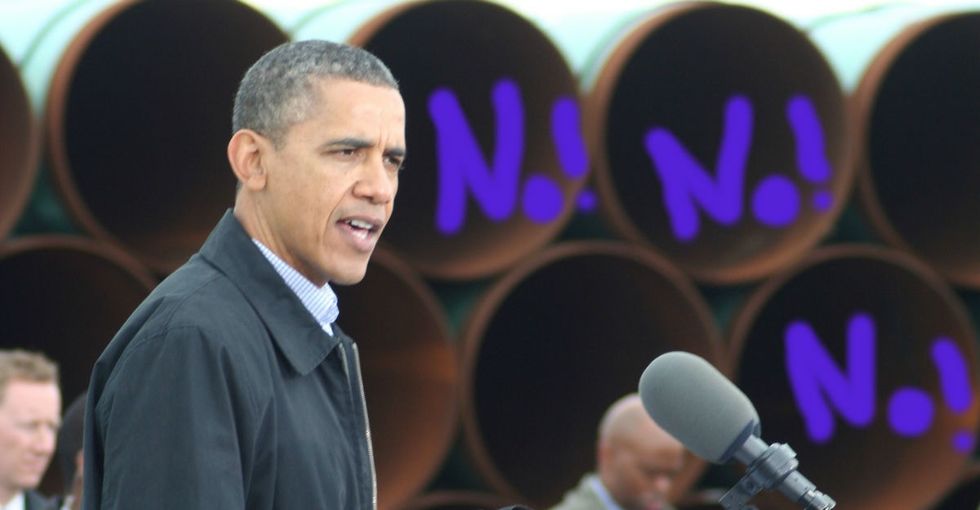 A lot of people have been working very hard for this moment.

The POTUS put his foot down and gave a big NO to Keystone XL.

Specifically, he vetoed legislation that would build a 1,179-mile pipeline to move 800,000 barrels per day of heavy petroleum from the tar sands of Alberta to ports and refineries on the Gulf Coast. (That would be the green line on the map.)

The president says he used the veto because of lack of "consideration of issues that could bear on our national interest — including our security, safety, and environment."

Um, what? You're dang right this is about our communities' security and safety! It's about the future of the planet!

If these two statements sound like kind of lukewarm opposition to the pipeline, you're right. Yeah.

The president hasn't really made his final position clear; he's said only that he refuses to be rushed into a decision.

In the past, he's given environmentalists serious whiplash with mixed messages, like when he said "NO drilling in Alaska" and at just about the same time said, "Drill, baby, drill — on the Atlantic Coast."

People fighting for and against the pipeline really see Keystone XL as symbolic: Build it and you are staying the course with fossil fuels.

But with a veto, people are hoping the president is making a decision to reject the "big oil" status quo and seriously commit to alternative energy realities.


In Scotland in 2014, renewables like wind power overtook nuclear, coal, and gas as the main source of energy supply. Yay, Scotland!

If you agree we ought to be turning away from fossil fuels, this is good news!

But also, share this post. Tell other people we gotta keep up the pressure. We don't need Keystone XL!

The whole world's security and safety depend on us choosing a new, climate-friendly way forward.