Students will be walking out of class on Friday to protest climate change thanks to this amazing kid. 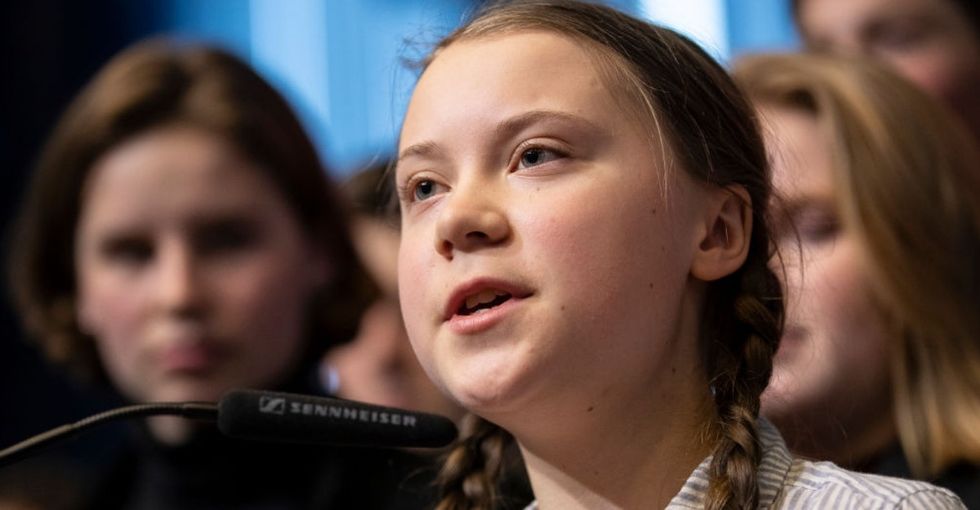 If you like people who "tell it like it is" and courageously speak truth to power, you'll love Greta Thunberg.

When it comes to taking action on climate change, Greta Thunberg doesn't mess around. The 16-year-old Swede's encyclopedic knowledge and brutal bluntness regarding the climate crisis have propelled her onto the international stage, where she calmly and assuredly tells powerful politicians and leaders that they are failing.

Thunberg is a unique figure, to say the least. As a child on the autism spectrum who has spent years studying climate change, she exemplifies the laser-sharp focus and intense dedication such kids are capable of. As a teen activist, she shows us what it means to make your voice heard and rally the masses. As a human being, she reminds us that nothing is more urgent than taking immediate, meaningful action to save the future of our planet.

And she does it all with an even-tempered frankness that is both jarring and refreshing.

Her speech to the UN climate summit is a must-see. This girl did not come to play.

When organizers invited Thunberg to speak at the COP24 summit last December on behalf of Climate Justice Now, I wonder if they knew that the world's leaders were going to have their asses handed to them by an angel-faced girl in Pippi Longstocking braids.

Imagine being 15 years old and telling the most powerful people on the planet—to their faces:

You only speak of green eternal economic growth because you are too scared of being unpopular. You only talk about moving forward with the same bad ideas that got us into this mess, even when the only sensible thing to do is pull the emergency brake. You are not mature enough to tell it like is. Even that burden you leave to us children. But I don't care about being popular. I care about climate justice and the living planet. Our civilization is being sacrificed for the opportunity of a very small number of people to continue making enormous amounts of money. Our biosphere is being sacrificed so that rich people in countries like mine can live in luxury. It is the sufferings of the many which pay for the luxuries of the few.

The amazing thing about Thunberg is that she says things like this in the sweetest, most matter-of-fact manner imaginable. It's incredible to watch.

"The year 2078, I will celebrate my 75th birthday. If I have children maybe they will spend that day with me. Maybe they will ask me about you. Maybe they will ask why you didn't do anything while there still was time to act. You say you love your children above all else, and yet you are stealing their future in front of their very eyes. Until you start focusing on what needs to be done rather than what is politically possible, there is no hope. We cannot solve a crisis without treating it as a crisis. We need to keep the fossil fuels in the ground, and we need to focus on equity. And if solutions within the system are so impossible to find, maybe we should change the system itself. We have not come here to beg world leaders to care. You have ignored us in the past and you will ignore us again. We have run out of excuses and we are running out of time. We have come here to let you know that change is coming, whether you like it or not. The real power belongs to the people."

Thunberg's activism has earned her a nomination for the Nobel Peace Prize.

Thunberg certainly has a way with words, but her primary focus is on taking action. Last year, she staged a full-time sit-in on the steps of Swedish parliament to protest climate change inaction. In the beginning, she sat alone. Now thousands of young people around the world are joining her.

On Friday, March 15, students in more than 1600 locations in more than 100 countries will partake in school strikes to bring their leaders' attention to climate change and protest inaction on the climate crisis.

Tomorrow, @climatestrikeus will be leading one of the biggest environmental school strikes in history. ELLE spoke t… https://t.co/oOy0bPMG9K
— ELLE Magazine (US) (@ELLE Magazine (US)) 1552569664.0

No wonder Thunberg has been nominated for the Nobel Peace Prize. If anything can unite the planet, it should be the desire to save our beautiful, life-giving home from destruction, and the collective will to make that happen.

As Thunberg told the World Economic Forum in Davos, Switzerland:

"We are at a time in history where everyone with any insight of the climate crisis that threatens our civilization–and the entire biosphere–must speak out in clear language, no matter how uncomfortable and unprofitable that may be. We must change almost everything in our current societies. The bigger your carbon footprint, the bigger your moral duty. The bigger your platform, the bigger your responsibility.

Imagine rummaging through secondhand finds in your local thrift store, only to find that some items include a bonus feline at no extra charge.

Montequlla the orange tabby had somehow not gotten the memo that he and his family were moving. As they dropped off furniture, including a big recliner chair, to the Denver Arc Thrift Store on New Year’s Eve, they had no idea that poor little Montequlla was tucked away inside.

Luckily, the staff began to notice the chair meowing.

A husband took these photos of his wife and captured love and loss beautifully.