She wants to create a trans-friendly house across from the Westboro Baptist Church.

An 8-year-old transgender girl has big plans for a house in Topeka. 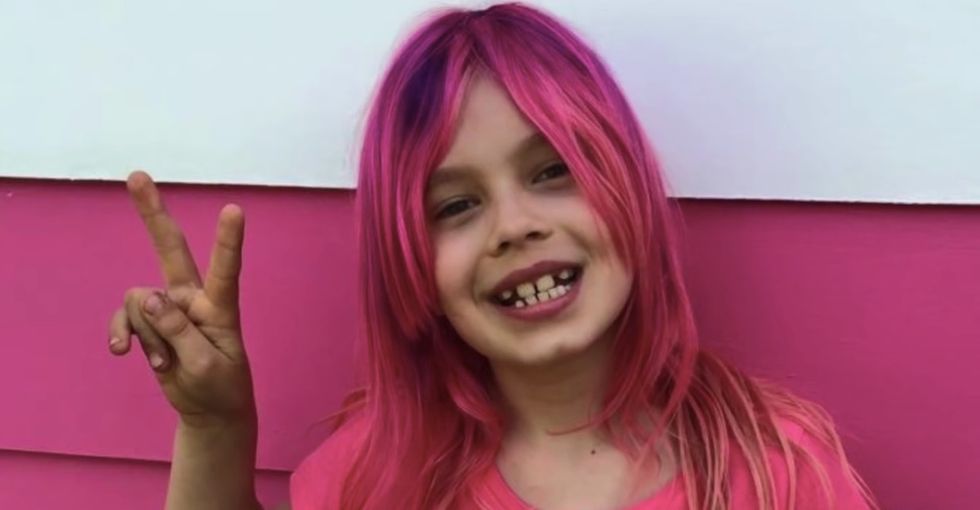 We've all heard of the Westboro Baptist Church, right?

They're the people who show up to protest just about every event imaginable (concerts, funerals — you name it) with their over-the-top homophobic signs and shouts. They're basically a YouTube comments section come to life.

Here they are protesting before the funeral service for Justice Antonin Scalia (who wasn't exactly a fan of gay people, anyway). Photo by Nicholas Kamm/AFP/Getty Images.

So, since 2013, a group called Planting Peace has been trolling WBC with Equality House, located across the street from WBC's home in Topeka, Kansas.

Decked out in rainbows, the Planting Peace house stands for pretty much the polar opposite of WBC. It's the organization's resource center for human rights and bully prevention initiatives.

A year ago, 8-year-old transgender girl Avery Jackson visited Equality House after it had been painted the colors of the transgender pride flag, and it gave her an idea.

While Equality House was only temporarily painted those colors (for one week in honor of transgender day of remembrance), Avery thought it was a really cool idea.

And she thought it'd be even cooler to do something a little more ... permanent.

"The purpose of Planting Peace's Equality House is to counter the actions of hate groups like the Westboro Baptist Church with love and compassion."

"I loved the Rainbow House when it was painted like the transgender flag," she says. "I felt so happy and proud to be transgender."

Avery set her sights on a house located right next to Equality House and planned to raise money to buy it and paint it the trans pride colors year-round.

Planting Peace joined forces with Avery, and together they're trying to raise $70,000 to buy the home next door and deck it out in trans pride colors permanently. How cool would that be?

If Avery and Equality House raise the funds needed, soon this house will be decked out in the colors of the trans pride flag. Image via Debi Jackson/YouTube.

"The purpose of Planting Peace's Equality House is to counter the actions of hate groups like the Westboro Baptist Church with love and compassion, and serve as a symbol to the LGBT community that they are not alone, that they have support from so many people," Planting Peace President Aaron Jackson tells Upworthy by email.

"I was deeply touched when Avery visited us and said it brought her joy and gave her confidence," he adds. "She inspired us to partner with her to create a symbol of support for the transgender community by expanding the Equality House and permanently painting our neighboring house the colors of the transgender flag."

Learn more about the plans for Transgender House at the video below.