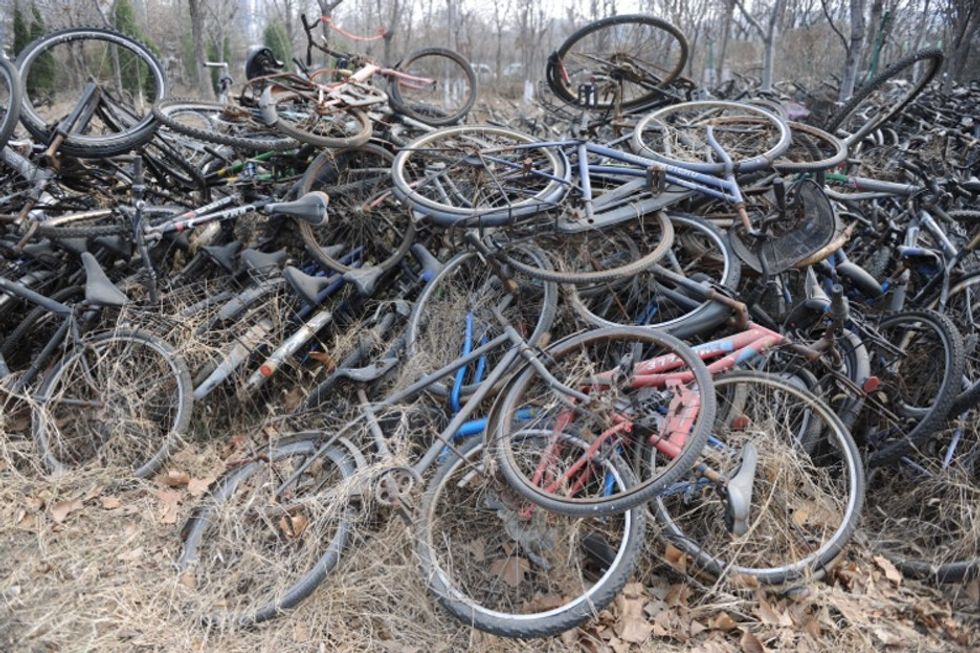 Good news: Bicycles are catching on in China!

What was once viewed as a symbol of poverty is now cooler than Copenhagen. And the two-wheeled trend couldn't have caught on sooner. Because in case you haven't heard, China has, erm, a bit of a smog problem — particularly in Beijing and other urban environments.

Among their many wonderful benefits, bicycles are efficient, affordable, and help cut down on smog and traffic congestion ... at least, until people start abandoning their bikes en masse, creating massive bicycle graveyards across college campuses.

Oh yeah. That's the bad news. While the highways have opened up a bit, some college campuses look like this:

That's the scene at Jinan University at the end of the semester. To be fair, a lot of these bikes are corroded, bent, or otherwise junked. But they kind of lose their environmentally-friendly appeal when all that steel and rubber gets left in large piles of scrap on the side of the road.

Some parts of the country have found ways to turn these bicycle cemeteries into refurbished bike share programs; other places have robust communities of scrappers, who rely on salvaged parts to earn their livings. But there are plenty of other uses for simple machines like wheels and pulleys too.

Here are a few cool ways that people around the world have found to repurpose pedal-powered parts, turning steel-and-rubber graveyards into hubs of innovation:

1. Gears and pedals can be used to create corn de-grainers, water pumps, and other agricultural machines.

2. Even damaged wheels or frames could make life easier for people with physical disabilities.

Wheelchairs made from repurposed bicycles by Ability Bikes in Ghana. GIF from Bikes Not Bombs/YouTube.

3. Scrap parts in general can be used to empower communities by giving them free access to learn mechanical engineering skills.

DIY bicycle maintenance is a lot easier and a lot cheaper than owning a car!

A youth mechanic apprentice at CESTA in El Salvador. GIF from Bikes Not Bombs/YouTube.

4. The rubber from used tires can be used to re-sole shoes.

5. Or to build rugged furniture for your home.

6. There are plenty of other crafty ways to repurpose metal bike parts too (though perhaps they're more Pinterest-y than practical).

If you don't need a spinning pot rack, there are plenty of other ideas on the Internet. GIF from Laurent Saidah/YouTube.

Bicycles are the perfect people-powered transportation machines. They're just as good in cities as they are in rural environments, and they're even better for people on a budget — because if you do your own upkeep, the only thing it costs you is a workout for your calves (which is always, always cheaper than the price of gasoline).

Bikes are good for humans, and they're good for the Earth. It only takes a little bit of work to go from this: