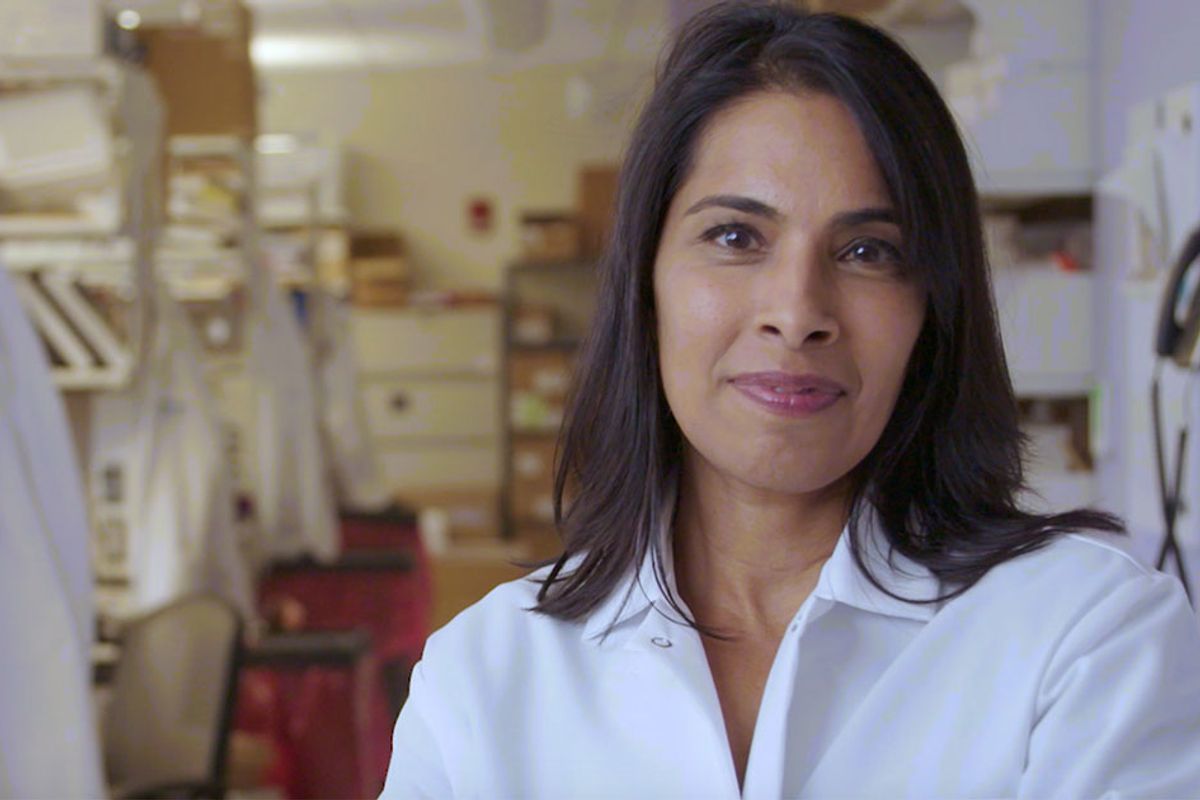 Little did he know that she would successfully become all three: an award-winning biomedical and mechanical engineer who performs cutting-edge medical research and has started multiple companies.

Bhatia holds an M.D. from Harvard University, an M.S. in mechanical engineering from MIT, and a PhD in biomedical engineering from MIT. Bhatia, a Wilson professor of engineering at MIT, is currently serving as director of the Marble Center for Cancer Nanomedicine, where she's working on nanotechnology targeting enzymes in cancer cells. This would allow cancer screenings to be done with a simple urine test.

Bhatia owes much of her impressive career to her family. Her parents were refugees who met in graduate school in India; in fact, she says her mom was the first woman to earn an MBA in the country. The couple immigrated to the U.S. in the 1960s, started a family, and worked hard to give their two daughters the best opportunities.

"They made enormous sacrifices to pick a town with great public schools and really push us to excel the whole way," Bhatia says. "They really believed in us, but they expected excellence. The story I like to tell about my dad is like, if you brought home a 96 on a math test, the response would be, 'What'd you get wrong?'"

Bhatia's father saw her potential in STEM and encouraged her from an early age. "I was good at math and science, and I was a tinkerer. I was always taking apart the family answering machine," she says. "He thought that I had the potential to be an engineer and he saw that I loved my high school biology class. So he brought me actually here, to MIT, where we met a family friend, and he was using focused ultrasound to treat cancer. And that really captured my imagination, the idea that you could build instruments for a medical intervention to impact human health. That really got me excited. And so I decided to study biomedical engineering."

At first, Bhatia didn't realize what an uphill climb science and engineering fields were for women, but it soon became clear.

"Freshman year we were 50/50 women and men," she says. "And by the time I graduated senior year, there were about seven women left in the class of a hundred. And I sort of realized what everyone was talking about with how women were underrepresented in engineering...what I'd experienced was the so-called 'leaky pipeline.'

"Then when I came to graduate school, when I joined mechanical engineering, I was one of very few women," she says. "And I would say that's persisted as I go on in my career. When I joined the faculty at UC San Diego, I was one of two women. And when I start companies, I'm often the only woman pitching a room of venture capitalists. I'm sometimes the only physician in a crowd of engineers, and sometimes the only engineer in a crowd of biologists or physicians."

One thing that helped Bhatia avoid falling through the cracks herself was winning a David and Lucile Packard Foundation Fellowship for Science and Engineering — a prestigious $875,000 prize given to a select group of the nation's most promising early-career scientists and engineers.

"When you're starting out as a young professor, you have all these bright ideas about things that you want to do," she says. "But the very first thing you have to do is you have to raise resources to do those experiments, to hire the students, to staff up the lab, to buy the reagents, to do the experiments."

Raising money isn't easy. Scientific research and innovation is a long game — more of a marathon than a sprint. It can take 10 to 20 years or more for an idea to go from seed to fruition, and multiple hurdles can arise through the process. As a result, funding is often limited or tightly controlled.

But the Packard Fellowship allowed Bhatia to freely explore various ideas and innovations that might not normally receive grant funding, such as creating a functioning 3D-printed liver.

"We were interested in that idea that we could print livers, three-dimensional livers, layer by layer, with light," she says. "And so I used the fellowship to explore that, to find materials that could cross-link when they were exposed to light and that would allow us to layer liver cells and build three-dimensional livers. And that actually has turned into a whole program in my lab where we've built little livers that we hope will replace transplantation. And so that was totally seeded. It was something that was an idea. I don't think I could have ever gotten grant funding for it because I had no what we call preliminary data — it was just a thought. And it's turned into a big, successful program."

One thing that's unique about the Packard Fellowship is that the funds are unrestricted, meaning a recipient can use the money any way they see fit. That feature not only provides freedom to explore ideas, but it can be especially helpful for women in STEM. For example, Bhatia had her first daughter in 2003 — four years into her fellowship — and being able to use the funds as needed during a critical time in her career and family life was huge.

"I think one of the things that you worry a lot about when you're a young mom scientist is that balance of making an impact in your profession, but also being the mom that you always wanted to be," she says. "And the Packard Foundation allowed me to use $10,000 a year of that fund to help support quality daycare for her, or night care. So if I was going to a conference and I needed help, or if I wanted to bring her along and got a second hotel room, there were no questions asked. It was just recognized that this was a stressor, and you could use this research funding to support that dimension of your life, which was really forward thinking and unusual."

Bhatia says the expectations in science and engineering have had to change as more women have entered the field, and she's personally had to navigate how to make it all work.

"The profession grew up around people where the vision was that you would work 24/7 to advance your idea," she says. "And often you had a whole family around you that was supporting you so that you could focus on that effort. And I think when women came into the field, we had to rethink that a little bit. So I traveled less, I wanted to stay home one day a week and be with my daughter, and I had to sort of recraft a vision for the profession that I thought I wanted it to be. And one of the biggest problems is how to pay for it all. How do you cook for the family? How do you clean your house? How do you get your baby out the door? Those are very real issues. And you know, you go up for tenure and you're establishing your scientific vision when you're in your thirties. It's an incredible crunch time, so it all sort of happens at once. And those financial offsets that you can give people in those formative years—that can make a difference between whether you stay in science and whether you don't."

Bhatia dedicates time and resources toward helping girls and young women find success in the field. Realizing that many girls lose interest in math and science in middle school, Bhatia and some female friends in graduate school founded a program called Keys to Empower Youth.

"The idea was that we would bring middle school girls here from the community. Many of them had never been to a college campus and they would get to experience hands-on high-tech activities that they wouldn't have access to in the community. Also, over the course of the day, they would meet a dozen young women engineers. Those were the college students here in the Society of Women Engineers, and that's also really important for them to see in front of them. You know, girls that are just a little bit older who have chosen this profession, who are making their way, so that they can feel like it's an accessible choice for them. That program is now 25 years old and it's spread to multiple institutions."

But, Bhatia says, more needs to be done. Though women are increasingly choosing STEM careers, engineering in particular is still a highly male-dominated field.

"We're not there yet and the slope of the line is not steep enough," she says. "If we keep going at the current rate, it's going to be 2092 before we have parity in the engineering world. It's just not fast enough."

Bhatia maintains hope, however, and sees her own story as an example of what's possible.

"I'm the daughter of immigrants," she says. "I came from a part of the world where even today, not all girls are educated. And I had my parents invest in my education, and I had the benefit of amazing public schools and private institutions, and have found myself in the halls of one of the most elite places in the world. Working with the best and the brightest minds on the problems of our time. And I think that I stand in a lot of ways for what's possible in this country, to collect people from all over and to point them to what matters."

Kudos to Dr. Bhatia for being a role model for women in STEM, and to the Packard Foundation for helping fix some of the less recognized leaks in the pipeline.