Pinterest and the Knot will stop promoting plantation weddings 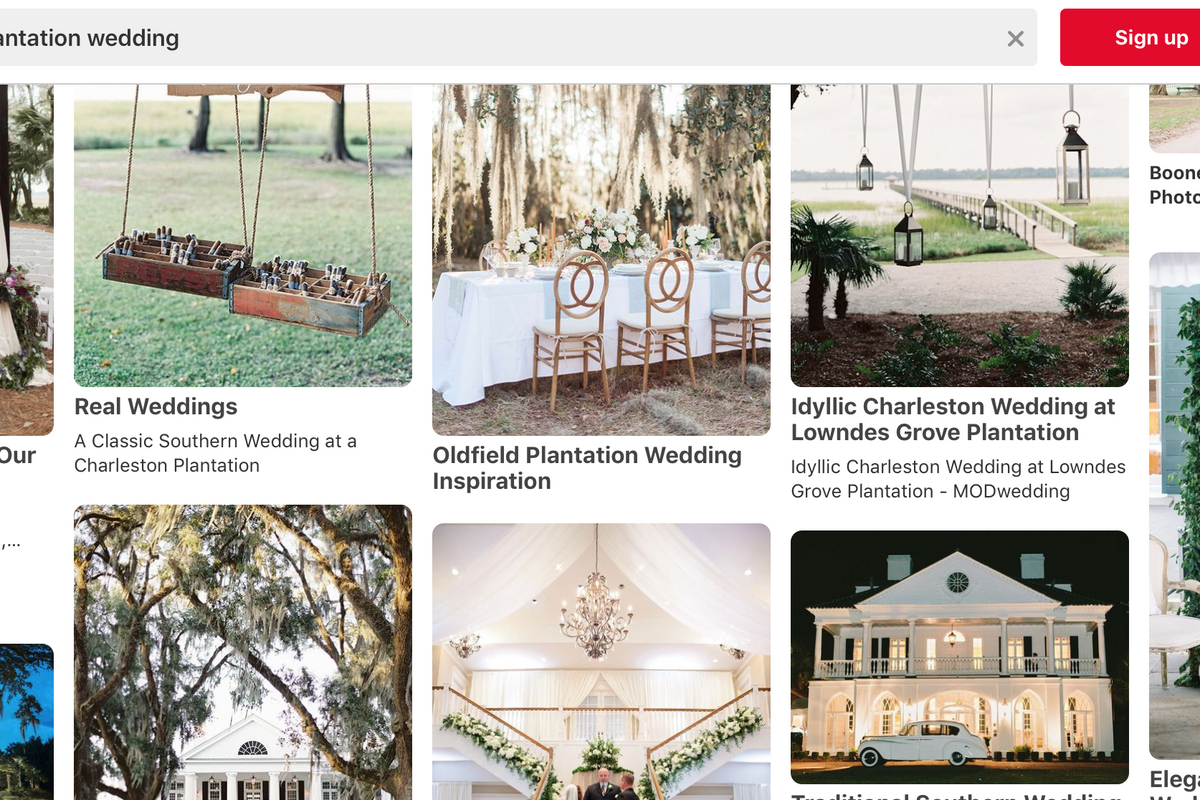 The average couple spends $33,391 on their wedding, and an average of $15,163 just on their wedding venue. More and more couples are going all out for their special day as wedding trends move towards focusing on guest experiences and moving away from booking traditional wedding venues. In order plan their special day, many couples turn to Pinterest and the Knot for wedding planning and inspiration. Now those websites are moving away from romanticizing former slave plantations and will no longer promote plantation weddings.

The Knot is working on changing their guidelines "to make sure we're serving all our couples and that they don't feel in any way discriminated against," the chief marketing officer for the Knot told BuzzFeed News. Venues are prohibited from "using language that romanticizes or glorifies a history that includes slavery." They're also taking measures to make sure plantations don't rebrand as farms to get around the new guidelines. Plantations are still allowed to list themselves as vendors on the Knot, but they just can't call themselves "charming.

RELATED: Man surprises his girlfriend with a wedding proposal on her last day of chemo

Meanwhile, Pinterest has already been limiting plantation wedding images. The website will no longer autocomplete the term, and limit search recommendations and email notifications for plantation weddings. Images of plantation weddings are still available on the site, but viewers get a warning on the top of the page stating, "People have reported Pins from this search. Let us know if you see something that goes against our policies."

"Weddings should be a symbol of love and unity. Plantations represent none of those things," a Pinterest spokesperson said in a statement. "We are working to limit the distribution of this content and accounts across our platform, and continue to not accept advertisements for them."

The companies are making these changes because of a campaign launched by advocacy group Color of Change. Color of Change emailed Pinterest and the Knot, as well as Zola and Martha Steward Weddings, pointing out the problem with plantation weddings. "Plantations are physical reminders of one of the most horrific human rights abuses the world has ever seen," Color of Change wrote in the letter. "The wedding industry routinely denies the violent conditions Black people faced under chattel slavery by promoting plantations as romantic places to marry."

RELATED: Outrage over a Handmaid's Tale wedding photo went viral. But it's not as tone-deaf as it seems

The point of the campaign was to raise awareness of "all the different ways that the wedding industry is disrespecting black folks by romanticizing … forced labor camps that brutalized millions of slaves," as vice president of Color of Change Arisha Hatch told BuzzFeed News. And it worked. The Knot was unaware of the issue, stating that nobody had voiced any concerns about plantation weddings on their site before Color of Change contacted them.

"If we were talking about concentration camps, it would be weird and disrespectful and egregious for folks to be seeking to have their weddings at these locations," Hatch said. "We're trying to elevate public awareness around the ways in which corporations can enable such disrespectful behavior."

There are so many other places for couples to get married that don't have a brutal history attached to them. It's great that wedding websites are starting to be respectful.