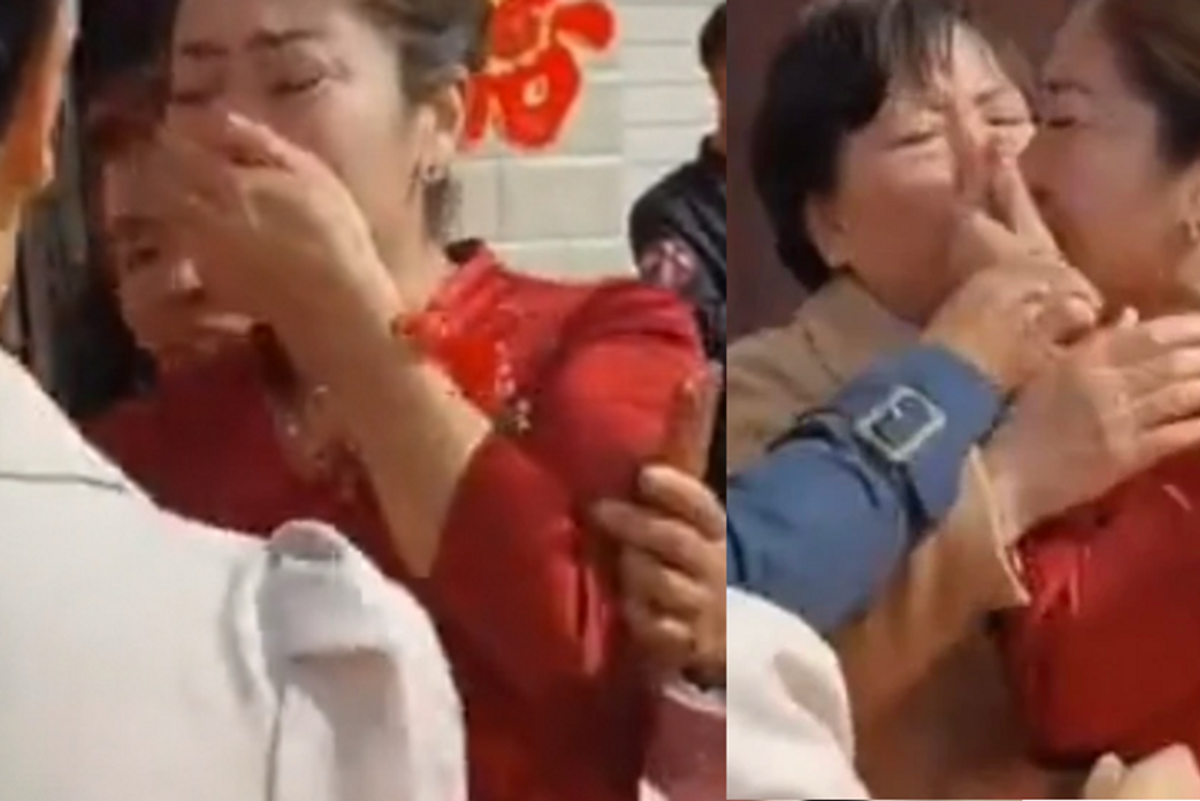 One of the strangest weddings in human history happened on May 31 in China's Jiangsu province. A woman was marrying off her son when she realized something unbelievably familiar about his wife-to-be.

She had a birthmark that was identical to the one that her daughter had. Unfortunately, she lost her daughter as a baby and never found her again.

So, the woman asked one of the most uncomfortable questions ever to the bride's parents: "Did you, by any chance, adopt your daughter?"

The parents were totally shocked because the adoption had been a family secret. But they told the groom's mother that her instincts were correct, the daughter was adopted. The mother of the groom immediately broke into tears, claiming that she was the mother and had been searching for her lost daughter for over twenty years.

This caused the bride to break down because she had been searching for her mother, too.

As you can see, this opened up a real can of worms. Should the couple be allowed to marry if they are brother and sister? Surely it wouldn't be legal and it'd also be seriously creepy.

Alas, the wedding was allowed to go on because the son was adopted. After searching for years for her daughter to no avail, the mother adopted a boy.

The bride later said that meeting her real mother was "happier than the wedding day itself."

So, is there anything to this story besides an incredible coincidence? Well, there is a psychological phenomenon known as Genetic Sexual Attraction in which people who are reunited with their long-lost siblings or parents often experience obsessive emotions about their newfound relatives.

Sometimes these feelings can turn sexual.

"This isn't fiction; in the age of the sperm donor, it's a growing reality: 50% of reunions between siblings, or parents and offspring, separated at birth result in obsessive emotions," a report in The Guardian said.

In this case, the bride and groom aren't genetically related. But, the fact that the bride was genetically similar to the groom's mother could have played a part in his attraction to her.

"We are drawn to what is familiar," psychotherapist Robi Ludwig told USA Today. "When there is a genetic link, that can increase, especially if you are not raised together."

The story could also be further confirmation of the old theory that men always wind up marrying their mothers.

A 2019 study published in The Daily Mirror found that "almost two-thirds of men are in a relationship with someone remarkably similar to their mother." It found that 64% of heterosexual men are attracted to women with the same personality traits as their mothers.

All in all, it had to be an emotional day for all involved. Just imagine being the mother, she got to have the privilege of seeing both her children being married at the same time. The bride and groom also have the unique experience of having their mother and mother-in-law as the same person.