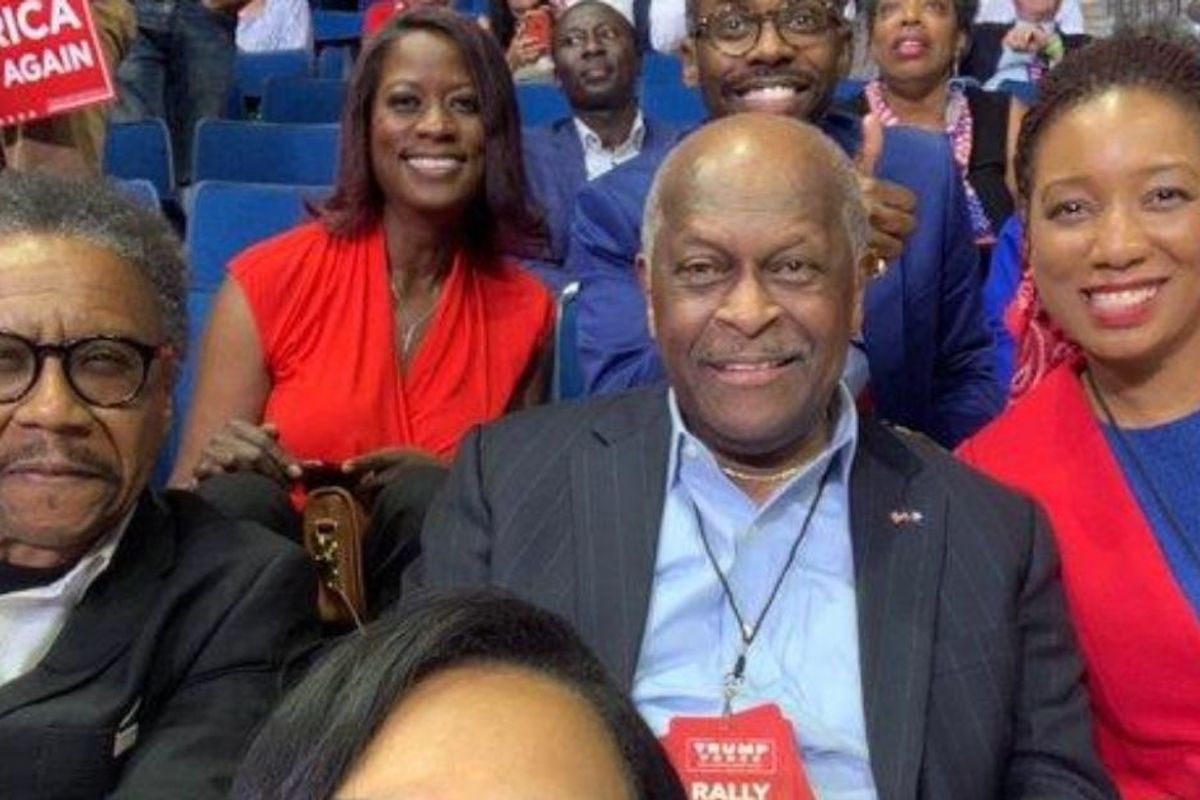 Herman Cain, former CEO of Godfather's Pizza, former Republican presidential candidate, and icon of conservative values has died a month after being hospitalized with COVID-19.

Cain went to the hospital with serious symptoms on July 1st, after testing positive for coronavirus two days before. Thought it's impossible to determine where he contracted the virus, it's notable that he had attended President Trump's Tulsa rally on June 20, where he was photographed in close proximity with others in a crowded seating area where no one was wearing a mask. Others who attended the rally also tested positive, including some of Trump's own campaign team.

Any death from any disease is tragic. But it would be foolish and short-sighted to simply express sadness that Mr. Cain died from COVID-19 without also acknowledging that his death from the virus was likely avoidable. While many people who were actively trying to avoid getting infected have unfortunately still contracted the virus, Cain had been going about business as usual, attending crowded rallies and doing "a lot of traveling" around the time he caught the virus, according to his familly.

We've been told by public health experts since the beginning of the pandemic that older people and people with certain health conditions are at a much higher risk than others of dying from the disease and therefore need to take extra precautions. Cain was 74 years old—well into the age group at high risk. He was also a stage 4 colon cancer survivor. Though he has been cancer free for many years, he still may have been at a higher risk of suffering complications from the virus as a cancer survivor. As the American Cancer Society website states:

"Some cancer patients might be at increased risk of serious illness from an infection because their immune systems can be weakened by cancer and its treatments. Most people who were treated for cancer in the past (especially if it was years ago) are likely to have normal immune function, but each person is different. It's important that all cancer patients and survivors, whether currently in treatment or not, talk with a doctor who understands their situation and medical history."

We also know that Black Americans are many times more likely to die from COVID-19 than white Americans. While much of the reason for that is likely due to socioeconomic disparities, statistically speaking, being a Black man in the U.S. put Cain at even greater risk from the virus.

Cain's age, health history, and race were three risk factors that we know of for sure. Anyone with that many risk factors should absolutely be taking public health recommendations to socially distance, avoid crowds, and wear a mask when in public seriously.

Some will call that fearmongering, but it's not fearmongering to simply state these known facts about public health. Some may call it disrespectful to use Cain's death as a cautionary tale, but it's not disrespectful to point out that a person who flaunted their refusal to follow health recommendations has died of the very thing those health recommendations are in place to avoid. It's truly a tragic irony. No one should take pleasure in it, but no one should deny it either. We're knee deep in a pandemic—a reality that far too many people are unwilling to fully internalize. It may be a slower emergency than we're used to, but it's an emergency nonetheless.

I hope Cain's loved ones are receiving the support they need to help them deal with his passing. And I hope everyone who has risk factors for COVID-19 sees his death as a warning sign to take coronavirus seriously and follow the guidance of public health officials whose entire job is to protect the public from exactly this scenario. Rest in peace, Mr. Cain.