No one had ever skated on this frozen mountain lake. Until now.

Winter is coming. For now, at least. 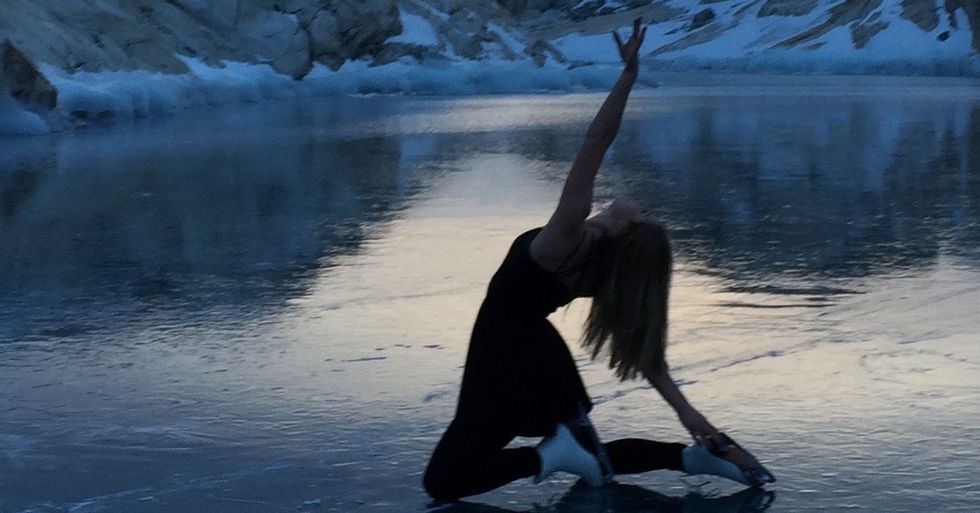 Winter in the coastal rocky mountains of British Columbia is not perfect filmmaking weather. So when aerial filmmaker Bradley Friesen finds a window to make videos, his collaborators have to be ready at a moment's notice.

For figure skater Katrina Lazzarotto, that meant saying yes to flying up to a tiny lake atop a mile-tall mountain — and buying a new pair of skates on the way to the airport.

Lazzarotto and her new blades on the way to the airport. Photo by Bradley Friesen, used with permission.

The expense was worth it. In a few short hours, she'd be skating on ice that human feet — let alone feet in skates — had never touched before.

Lazzarotto laces up for the skate of a lifetime. Photo via Bradley Friesen/YouTube.

The lake on which Lazzarotto is about to skate is extremely remote.

It's deep within the coastal mountain range, about 50 miles northeast of Vancouver. There's no way to get near it, no roads or access. You'd never know it existed unless you were a mountain goat or you'd flown over it in a small helicopter.

This glacial lake is one of seven nearby nicknamed "The Mystics." They range in color from deep blue to bright green during the summer. Photo via Bradley Friesen/YouTube.

Finding a frozen lake this high in the mountains without snow cover is extremely rare. "I'd say it's about a once every ten years phenomenon," says Friesen as we chat by phone. "But because of climate change, it's happened the last three years in a row."

And when it does happen, it's time to seize the moment.

To quote Internet prophet David after Dentist: "Is this real life??" Photo via Bradley Friesen/YouTube.

Before this day, Lazzarotto hadn't skated in four years. But it all came back quickly.

Lazzaratto called this skating "on heaven." She's not wrong! GIF via Bradley Friesen/YouTube.

When you're a mile high in the mountains, perspective comes easy.

Filmmaker Bradley Friesen has been flying helicopters for the last 25 years, but only in the last two has he actively pursued a living as an aerial filmmaker. He's passionate about documenting western Canada's wild outdoors — particularly in winter, which on the coast gets shorter ever year.

Lazzarotto shoots the duck for the camera. Photo via Bradley Friesen/YouTube.

"I'd be stupid not to be an environmentalist," Friesen says. "Climate change is having an effect on all of us. Our glaciers in British Columbia are receding so fast. They used to move back 10 feet in a season, now it's like, 50 feet or more every year."

"I think it's important I'm capturing it, so we can show people in the future what winter used to look like."

Friesen has two other winter videos he dreams of making.

He wants to film a pairs skating team in the mountains — holler at him on Twitter or Instagram if you are in one and live within a day of Vancouver — and he's desperate to build a hockey rink and play a game on a frozen mountain lake.

"I've tried to build a rink 15 times and failed every single time," he says, laughing. "I can tell you precisely how not to build a hockey rink at 5,000 feet."

Here's hoping winter sticks around B.C. long enough for him to make his dream come true.