'Labels' are not the problem with Priyanka Chopra's controversial refugee shirt. 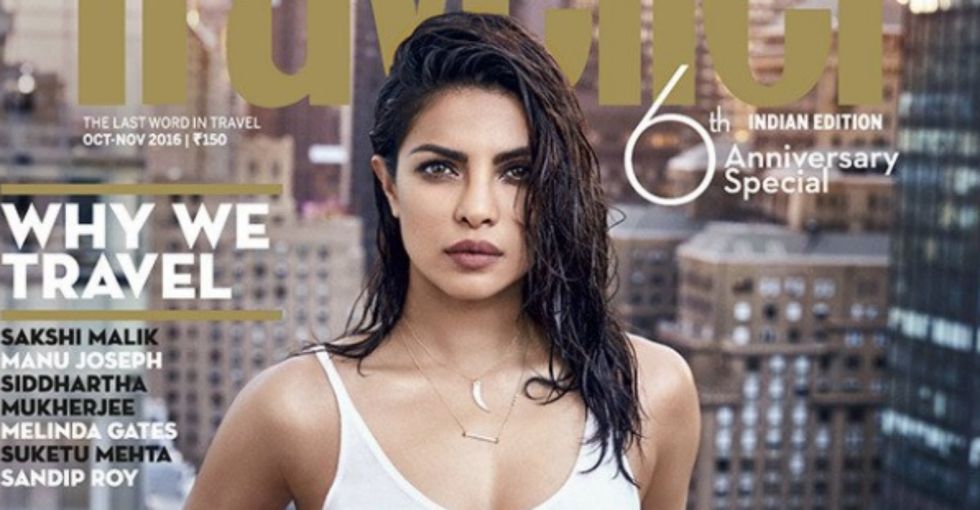 This is actress Priyanka Chopra.

The Bollywood super star is on the October-November 2016 cover of the Indian edition of Condé Nast Traveller magazine. But it didn't go over all that well.

Can you spot why?

Yep, people took issue with Chopra's tank top. It turns out looping "refugees" in with "outsiders" and "travelers" isn't the best way to broach the topic of the very real hardships refugees and immigrants face.

Backlash was swift, with many folks pointing out that having Priyanka Chopra, a wealthy A-list celebrity, striking a pose wearing the shirt on the cover of Condé Nast Traveller — a publication that caters to those fortunate enough to enjoy the luxuries of global tourism —  trivializes the plight of world refugees.

In other words, as Huffington Post blogger Arpita Das noted, the cover reflects "a privileged view of a global issue."

"The lack of choice in removing one's home and hearth from the familiar to the alien is one fraught with heartbreak and the feeling of being cornered," she wrote. "[It's] very different from picking out the next attractive destination on your bucket list and surfing through AirBnb for that perfect place to park oneself."

Das wasn't the only one who pointed out the problematic shirt. Plenty of people on Twitter noted how insensitive the cover came across on an issue we so desperately need to get right.

To some, it was a shallow way to get publicity.

Not Cool @priyankachopra to be refugee isn't choice for people,never expected such gimmick from you to sell magazin… https://t.co/PNfFscPyEt
— Nitin Shriwas (@Nitin Shriwas)1476042519.0

For others, it was the lives of the rich and famous at their worst.

@priyankachopra @CNTIndia Your new cover is very degrading. Do you even have a clue what it means to be a #refugee or an #immigrant? Awful!
— Human Nations (@Human Nations)1476059646.0

And really, shouldn't we keep in mind what simple wish refugees want most of all?

@Nitu_23 maybe it was well-intentioned, but it forgets that refugees don't crave to become world travelers, they wish to find peace at home.
— Ruchika (@Ruchika)1476080045.0

Both the magazine and Chopra released statements in the aftermath of the fallout apologizing for the mishap.

“[Condé Nast] specially got [the shirt] made and implored me to wear it," the actress told NDTV. "They said they were addressing xenophobia, which is a big issue that is happening."

“I am really, really apologetic about the fact that so many sentiments were hurt. I mean, that was definitely not the reason. Me, of all people, I'm someone who always stands for no labels. ... The point the magazine wanted to make was actually something good.”

In a post online, Condé Nast explained the decision to have Chopra wear the shirt (emphasis added):

"We believe that the opening up of borders and the breaking down of walls can help us discover the world, and open up our minds and hearts. So, when we had actor Priyanka Chopra wear a T-shirt we created on the cover of the 6th anniversary issue, we had a point to make. It’s about how our labelling of people as immigrants, refugees, and outsiders is creating a culture of xenophobia. ... It’s about how we are allowing some powerful leaders to build barriers that make it more difficult for bright, motivated, and hardworking people to see more of the world, learn from it, and make it better for us all."

Chopra and Condé Nast had good intentions. But they really did miss the mark — even in their apologies.

Both the magazine and Chopra expressed the idea that labels are the real problem. And, on paper, that notion seems to hit the nail on the head.

Who needs labels anyways? Don't they just pit us against one another?

In a perfect world, maybe labels would be a hinderance. But in the real one, labels are oftentimes necessary and important.

Syrian refugees staying on the island of Chicos. Due to conflict in their home country, the world is dealing with the largest refugee crisis since World War II. Photo by Louisa Gouliamaki/AFP/Getty Images.

Refugees are uprooted from their homes due to factors like war and natural disaster. Immigrants, on the other hand, have moved from one place to another voluntarily — maybe to better their own circumstances, yes, but they haven't been forcibly displaced in the same way refugees have.

Labels help us understand these differences so that we can address the important issues facing each group of people. It's not the labels that are the problem, it's what we do with them.

The shirt Chopra wore doesn't help us differentiate between a refugee and an immigrant (not to mention a tourist). Blurring the lines between groups like these — and overgeneralizing them — can reinforce dangerous misperceptions: that refugees are the ones responsible for recent terror attacks in the U.S., for instance, or that all immigrants from Mexico are undocumented immigrants.

It matters that high profile publications and spokespeople get this right because, right now, the world is grappling with a massive influx of refugees.

The civil war in Syria has caused "the worst humanitarian crisis of our time," according to Mercy Corps, with millions of families forced to leave their communities. Kids are kept from going to school. Mothers and fathers struggle to feed their children. And often, families are left with nothing but the clothes on their backs.

If a magazine wants to find a way to address the refugee crisis, that's wonderful. But doing so takes care, context, and perspective — the type of nuance you can't convey on a cover model's tank top.