Kid Chef Eliana got her first set of knives at 8. Now 16, she’s building a cooking empire. 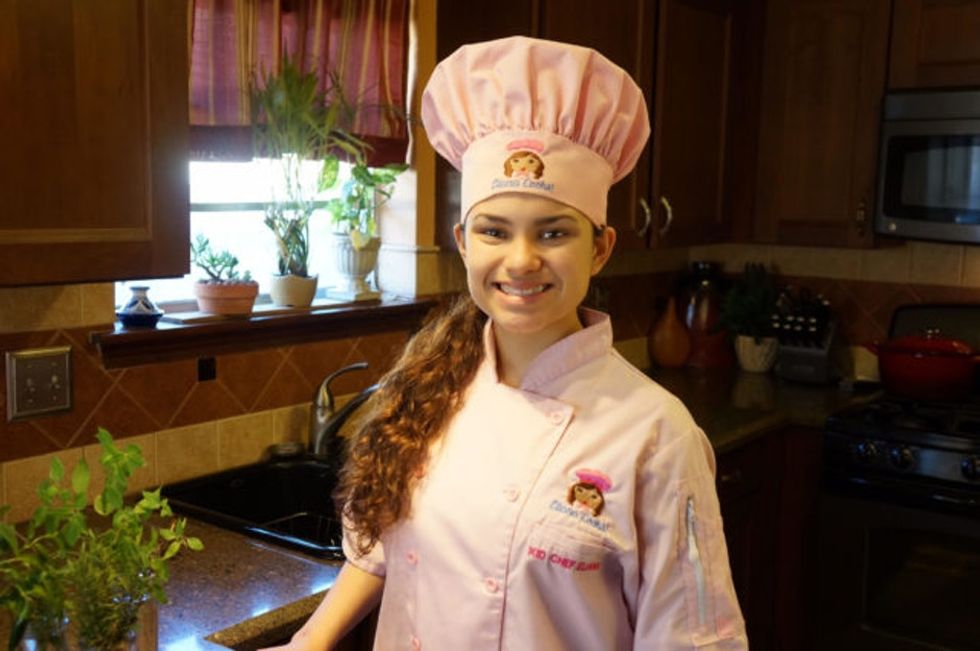 When she was 8, Eliana de Las Casas posted her first video online. It was the first step in her taking the cooking world by storm.

Eliana grew up in a home where food was a favorite pastime. Family gatherings were centered around the kitchen, and she loved being a part of that. And with grandparents from the Philippines, Cuba, and Honduras — as well as Louisiana, where she lives — there was a lot of good cooking happening.

At around 4 years old, Eliana begged her mom to let her help out with meals.

"I just loved seeing everyone cooking in my family," she said. "And one day I was like, 'Mom, can I help?'... At 4 years old, I wrote my first recipe for strawberry and cream cheese sandwiches for a Valentine’s Day party."

By 8, she’d received her first knife set and was a full-fledged chef putting together her own meals and getting creative with recipes. She’d stumbled upon her first love.

All images via Kid Chef Eliana, used with permission.

And Eliana's family supported her. In fact, there’s a chance none of this would have happened without them. Her mom, who is a published author, encouraged her to write a food blog one summer to keep developing her writing skills while the school year was on break. She dove into this assignment headfirst and loved it so much that she never stopped.

It was Eliana's sister who suggested she post cooking tutorials on YouTube. When her show took off, the entire family chipped in to help her self-publish her first cookbook, contributing recipes and funds. They gave her the support she needed, and she let her own passion drive her.

Today, she’s known as Kid Chef Eliana, and she helps both parents and kids find their way into the kitchen.

She wants to make it easier for kids to get in the kitchen so that they don’t experience the young adult moment of shock and disorientation when they don’t have their parents to supply all of their meals. An endless diet of ramen doesn’t have to be the answer if kids develop basic cooking skills.

She's also on a mission to spread the word that food that's good for you doesn’t have to be bland. She encourages families to approach all foods with moderation and says she and her family indulge occasionally — they do live in the land of Cajun food after all — but they know that not every meal needs to be filled with bacon and butter. She put together an entire cookbook of some of her favorite recipes using fresh foods to give families a few ideas for delicious meals.

The most important thing, she says, is for families to just start somewhere — wherever they can.

It can be cooking a few meals per week. Or planting an herb garden and letting it grow; Eliana started her own to cut down on produce costs and now has fun growing her own herbs and vegetables.

And even though she’s getting older, Eliana isn’t leaving her audience behind. She still thinks there’s a strong need for kid-friendly cooking shows. "A lot of people only will cater to adults. ... I want kids and different families to learn how to cook. Food brings people together, and I think that’s something that’s really important."

Even with all that Kid Chef Eliana has done, this is still only the beginning for her.

She's about to launch her own line of spices. She’s starting with one family-friendly Cajun blend that has less salt and less heat than other ones on the market but which is equally delicious. She wants to launch a line of cookware for kids, and her focus is laser-set on getting her own cooking show (her numerous TV appearances are preparing her well).

With the way she’s accomplished everything she’s set her mind to so far, it seems likely that those achievements are on the horizon.

"As I keep going I’ll add more things that I want to do," she said.

She's introduced thousands of families the endless benefits of coming together and having fun with food all while juggling school and building her own mini empire. There's no telling what will come next.