John Oliver gives an eye-opening look at one of the lesser known ways chicken farming is messed up.

"All those horrible conditions chickens are kept in? Farmers might not care for those, either." 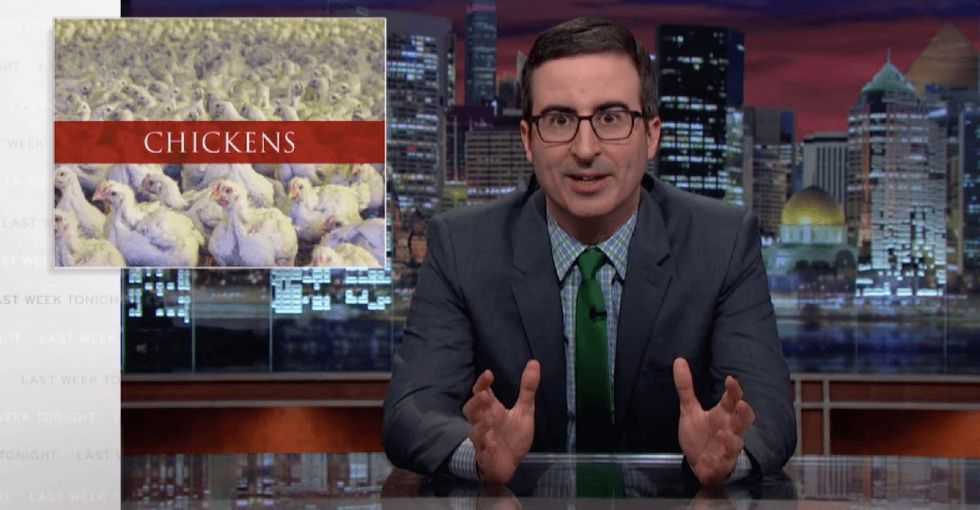 John Oliver laid into the chicken industry for harsh conditions on the most recent episode of "Last Week Tonight." Just maybe not the conditions you're thinking of.

It's been pretty well-documented just how bad the conditions are for chickens on American farms, but less talked about are the conditions the farmers are forced to deal with.

Despite the fact that chicken is the most popular meat in the country, things aren't so great for many of the country's chicken farmers. Oliver points out that while the large companies that produce chicken are making money, many of the people who actually do the farming are hovering around the poverty line.

And this is due to contract farming, which Oliver describes: "Companies bring baby chicks to an independent farm, drop them off, and pick them up a little more than a month later."

Essentially, while farmers invest time, energy, and money into raising chickens, they don't actually own the chickens.

Farmers are promised a steady source of income, but really, they're paid according to something called a "tournament" or gladiator system — that is, farmers are forced to compete with their neighbors.

Farmers who outperform their neighbors in terms of chicken weight, efficiency, and a number of other factors are given bonuses. Farmers who underperform are hit with steep penalties. Many of these factors are outside the farmers' control.

Farmers claim that if they speak out about the unfairness of the system, they're likely to be sabotaged by their suppliers.

One farmer explains that farmers who speak out seem to be sent lower-quality chicks than those farmers who keep quiet, putting them at a huge disadvantage in the existing tournament system. Basically, farmers are afraid to speak up for fear of retaliation, and there isn't an enforceable system in place to protect them.

And the chicken industry isn't in a hurry to reform its system.

National Chicken Council Spokesman Tom Super doesn't seem all that concerned about how much (or how little) farmers make. Using a scene from Fusion's documentary "Cockfight," Oliver lays into Super for worrying about defining "poverty" and not the larger problem.

Oliver ends the segment by urging members of Congress to vote to protect farmers from retaliation so they can speak out to push for a fairer system.