In areas with no electricity, this power-generating soccer ball is providing the light.

You just have to play with it. 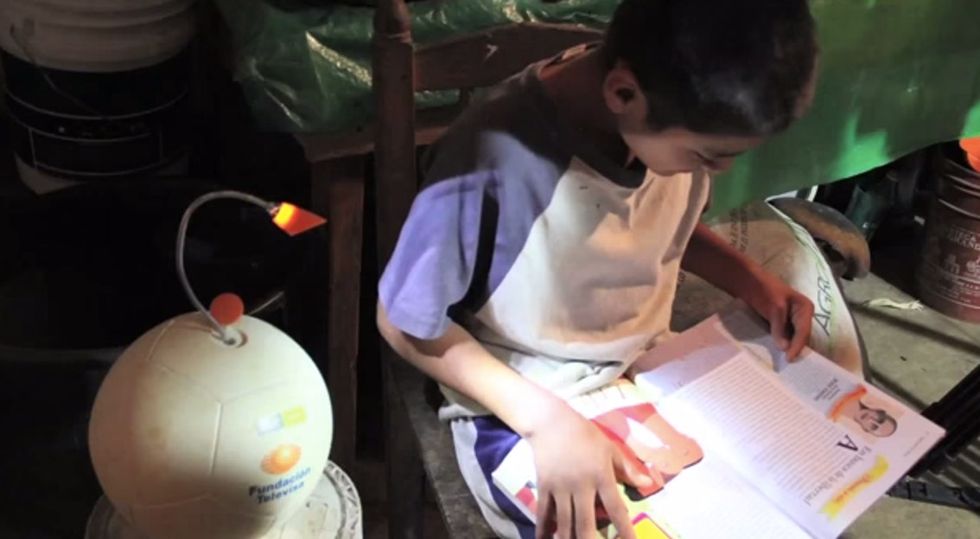 This soccer ball has a lot of power.

It's called Soccket, and it's changing how people see, play, and ultimately live. It's big time.

The ball comes from Uncharted Play and it generates power when you play with it. If you kick it around for just one hour, the energy stored in it can provide up to three hours of power to do things like shine a light, charge a device, or even run a heater. (Run a heater with a soccer ball! What!)

But that's not all it can do.

It can help kids stay in school and see a different future.

"When there is no light, how do you read?" Nigerian teacher James Ajah Eiche asks in the above promo. He knows the answer all too well: You don't.

Without light to study and read, studying and reading doesn't happen. And without a proper education, it's incredibly difficult to break the cycle of poverty that keeps people in the dark to begin with.

1 out of 7 people in the world still live without electricity.

That's 1.1 billion people living in the dark, according to a report by the World Bank, with the majority of them located in Asia or sub-Saharan Africa. They are forced to rely on inefficient means for energy like kerosene lamps and diesel generators that are horrible for the environment and for the lungs.

The Soccket ball is just one way to combat dangerous energy alternatives in places where electricity is not accessible. And so far, approximately 40,000 units of the Soccket II have been distributed to communities that need it.

"It's meant to be the spark," said Uncharted Play's Co-Founder and CEO Jessica O. Matthews. "It's meant to be that thing that jolted people into realizing what was possible. The most interesting ideas are going to come from the places that people would never expect. Just a little bit of power can make such a huge difference."

Taking on a serious issue in a playful way? Count me in.

You can count yourself in too, if you want, because when you buy one of Uncharted Play's power-generating balls or jump ropes, one will be given to a kid in need. Bam!