I'm black. I live in the whitest city in America. So I left town to see 'Black Panther.' 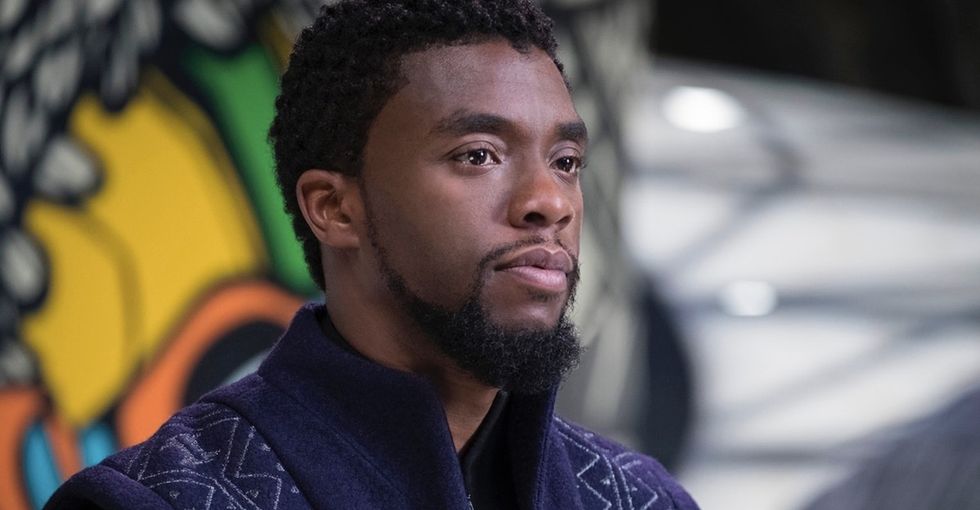 "Where are you off to tonight?" my Lyft driver asked.

"Wakanda," I said under my breath.

I got up, rolled out my suitcase, dropped my dog off at daycare, and flew 965 miles to Los Angeles to see "Black Panther."

It wasn't a star-studded premiere. It wasn't a sneak preview or special showing with a Q&A. It was simply a 3D show at the Baldwin Hills Cinemark I selected for one specific reason: I wanted to watch "Black Panther" with other black people.

Allow me to back up.

I live in Portland, Oregon.

It's a beautiful city. The air is clean and the donuts are plentiful, but it is very white. Because I work from home and live in a mostly white neighborhood in the whitest city in America, I can sometimes go a full week without seeing another black person in my daily interactions.

While my neighbors are, for the most part, well-meaning white people, they're still white. I still get curious stares at the fancy grocery store and literal head tilts at the dog park. What can I say? White people gonna white.

When I heard about "Black Panther," I knew this would be a film for the ages, but maybe more for me than my neighbors.

If you're unfamiliar with the actual plot of the film or the comics it's based on,  here's a rapid-fire recap: Following the death of his father, King T'Chaka, Prince T'Challa (Chadwick Boseman) becomes King of Wakanda and Black Panther. Wakanda is a technologically advanced nation in Africa, whose innovation is fueled by vibranium, a powerful metal found deep in the mountains.

To preserve the rich resource and protect its citizens, Wakanda hid itself from the outside world, presenting as a rural, developing farm country. As T'Challa assumes the throne, he is challenged by foes determined to destroy his country and its beautiful legacy. So he teams up with his badass team of lady special forces, the Dora Milaje, and the CIA to stop it.

While "Black Panther" does not feature the first black superhero and it's not the first black movie on the big screen, this film is something altogether different. With the Disney and Marvel money machine working overtime, "Black Panther" has the production and marketing budget most films with majority-back casts only dream of. It was also co-written and directed by black people, Joe Robert Cole and Ryan Coogler, who are the personification of young, gifted, and black.

Uh, black people kicking ass and taking names to protect their African technological utopia? Yes, please. I knew if I wanted to experience this with people who deeply understood what a unique and affirming film this would be, I couldn't see it in Portland. Sure, there would be fans, but something would be missing.

When tickets went on sale a few weeks ago, I bought one for the 8 p.m. show in Los Angeles ... then checked on flights.

I selected the Cinemark at Baldwin Hills because the community is almost the exact inverse of my own.

Just a two-hour plane ride and a short drive from my home is the Baldwin Hills/Crenshaw neighborhood in the southern part of L.A. It's home to more than 32,000 people. 71% are black, with Latinx and Asian people both ahead of white people by the numbers.

I went inside the large theater and took it all in. As I snaked through the popcorn line, a little black boy practiced his Black Panther fighting moves on the velvet ropes. The adults with him smiled warmly and took pictures of the TV screen displaying the movie times. Just seeing Black Panther's name on a run-of-the-mill flat screen was enough to celebrate.

I buzzed with anticipation and treated myself to an Icee. Black Panther would want me at my sugary best.

As the room filled, I took a very unofficial census and noticed my theater was about 90% black with a handful of Latinx people and three white people.

The vibe was less, "opening night at the movies" and more "family reunion." There were big hugs. Run-ins with old friends, barbecue chicken snuck in inside a purse, and some pretty awesome looks. (The release of "Black Panther" has inspired many people to break out their African prints, donning gowns, geles, and bold shirts. To be clear, these pieces and prints aren't costumes. They're culture. There's an entire hashtag dedicated to it. Spider-man could never.)

The film started abruptly after a few credits rolled and I was suddenly nervous. What if it couldn't live up to the hype? What if I'd pinned too much on a simple movie?

Fortunately, I had not.

And seeing the film with black people only heightened the entire experience.

We clapped. A lot. Did Chadwick Boseman come on screen? Clap for him! Did a black woman just beat someone's ass? Give her a round of applause. Did the white man say something silly? Give him a golf clap for being a decent ally.

We let out big belly laughs and ducked and winced in pain when T'Challa took his licks. We were a part of something bigger than a blockbuster budget or a late night showing. We were in on something together, fighting right alongside our blackity-black-black hero. We celebrated the black excellence on-screen, loud and proud. Because we finally had the space and opportunity to do so.

There was something monumental about seeing a black man and the fierce women who protect him fighting to preserve and defend their country and culture against those out to destroy them.

I felt an almost instinctual urge to protect Black Panther, both the character and the film, not just from the villains who would do him harm, but the world at large. To shield him from those who don't understand why we need a black superhero in the first place. To safeguard him from the people who roll their eyes when we clap and cheer and get our lives for a near-perfect two hours. To secure him from a world where black boys can yell out his name and are met not with "Shhhh," but a handful of women across the room cheering, "That's right, baby" like an "amen" in church.

I still want to protect him, and this film, because I know that in the real world, there are people who want nothing more than to crush our joy, steal our spirit, and limit our dreams.

But ultimately, he doesn't need my help. Black Panther, hero and film, are more than strong enough to stare down super villains and everyday haters. And if he's not — if it's all too much — the fierce community behind him has his back.

When the film ended, we clapped once more and the lights came up.

I took a few deep breaths, not wanting to forget a thing. People gathered their empty popcorn tubs and walked to the exit, a little bouncier, heads a little higher. The film just has that effect on you. I wondered if white people felt like this walking out of every other movie. Visibility is a bigger privilege than they'll ever realize.

A new Lyft driver picked me up and I slid over in the seat.

"Did you just come from 'Black Panther'?" she asked.

I stared longingly at the wave of smiling black faces walking out of the movie theater and into the night, a fitting end to an evening in our own private Wakanda.