How to talk to your kids about family separation: An expert weighs in. 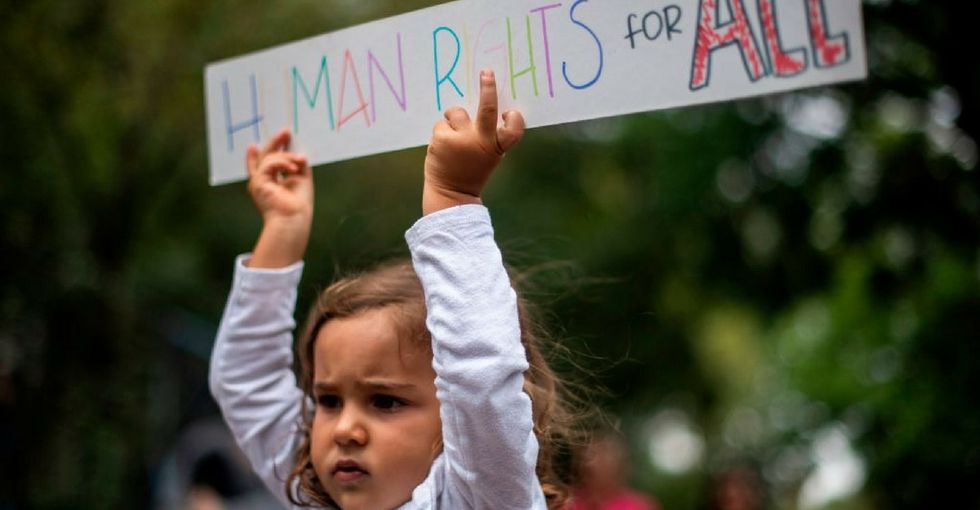 When disturbing news hits, how do we talk to our kids about it?

Parents and people who work with kids know how hard it can be to share the harsh realities of the world with children. We wonder how much we should shield their innocence and protect them, but we also know it's our job to prepare them to be active, engaged, and informed citizens.

News of families being separated at the U.S. border has rocked many Americans to our core. That our government would purposefully and unnecessarily put innocent children through pain and anguish — for any reason — is unconscionable. What do you say to children if or when the topic comes up?

Upworthy asked parents and teachers how they're talking to kids about what's happening at the border, and their comments varied widely.

Some parents, especially those with very young children, say they don't talk to their children at all about the news.

"My granddaughter is 5. Her parents are not exposing her to this. I think that's a good idea right now. I want her to believe that we are the good guys ... and I hope that by the time she's old enough to understand this, we will be." — Paige Woodward Watts

"I don't let my 5-year-old watch the news, and we don't listen to it when he is around. I have the privilege of being able to protect him from these nightmares, at least for now." — Ruth Goldberg Hilton

Others say they can't hide it from their kids because they get openly emotional thinking about what people are going through.

"My kids are 5 and 7. We started to incorporate the displaced kids into our nightly prayers, and as I started to explain why, I began to cry. At first, I felt guilty about sharing my grief with them, but they need to know. I'm trying to raise good men, so this is where it starts." — Marysella Mularz

"Mine found out when I called and left a message for AG Jeff Sessions and was angrily emailing my senators. She hadn't seen me that mad/upset in a long time. She asked what was going on. I told her all about it and that I couldn't stay silent any longer." — Katie Jobes-Lamb

Some parents tell their kids everything and encourage active engagement with current events.

"Mine are 11 and 9, and due to some stuff we have faced as a family, we have decided the cold hard facts are best. We have taken them to protests and city hall meetings and shown them how government works and how the people have power to fight against things like this. It is up to us to stop the bad from happening, and giving our kids the knowledge to do that gives them power and the tools needed for the future." — Laura Coffing

"As a border resident, my children are already exposed to the hatred and its consequences that harm their friends. They have seen the increase in their young lives, and they stand up for their peers — they've never known life without this kind of thing, so listening to their concerns and helping them strategize and learn how to defend their peers started very early on." — Bequi Marie

When parenting gets confusing, it helps to find an expert who can clarify things.

Michelle Borba, an educational psychologist and author of "Unselfie: Why Empathetic Kids Succeed in Our All-About-Me World," shared her insights on how to handle tough news stories with kids.

"The most important first thing is you always — always — make the talk developmentally appropriate to the child you're dealing with," Borba says. "It's brief and it's simple with little kids, based on what they know. And you stop and start the conversation with bigger kids because they're trying to process."

Tune in. Pay attention to what your child may be seeing or hearing. "Don't assume your child isn't hearing about this," Borba says. Unless they're being raised in a bubble, they're probably getting exposure to the news on the playground or seeing images and headlines out in public.

Assess or Ask how your child is doing. They may not open the conversation with you, but you can ask them "What are you hearing about this?" or "What are your friends saying about this?" They may be more aware than you know, or they may have heard things that are untrue or unsettling, so check in with them occasionally.

Listen to their thoughts and feelings. Listen at least twice as much as you talk to find out where your child is with all this. "Some children, I will warn parents, are very sensitive about this," Borba says. If appropriate for the child, you can always ask them how they'd feel if it was happening to them. "This is a wonderful way to boost your child's empathy," Borba says.

Kindle hope. "Many kids are going to be sensitive to this or they're going to be worried," Borba says. "And one of the best ways to reduce the worry factor ... and build empathy, is asking 'What can we do?'" The doom and gloom that comes with only hearing about the issues will cloud their image of the world, Borba says. The goal is to raise a child who will better the world, so encourage them to act on their empathy.

If everyone could just approach these situations like Mister Rogers, we'd be a lot better off.

Several Upworthy readers and Borba mentioned various versions of "What would Mister Rogers do?" "I think one of the things we're really missing right now is Fred Rogers," Borba says, "... helping children realize the world is good." She says we can tell kids, like Rogers did, "Look for the helpers. Don't look at the people who are pulling kids apart from their parents, but look for the people who are trying to make a difference and help out — that can be you too."