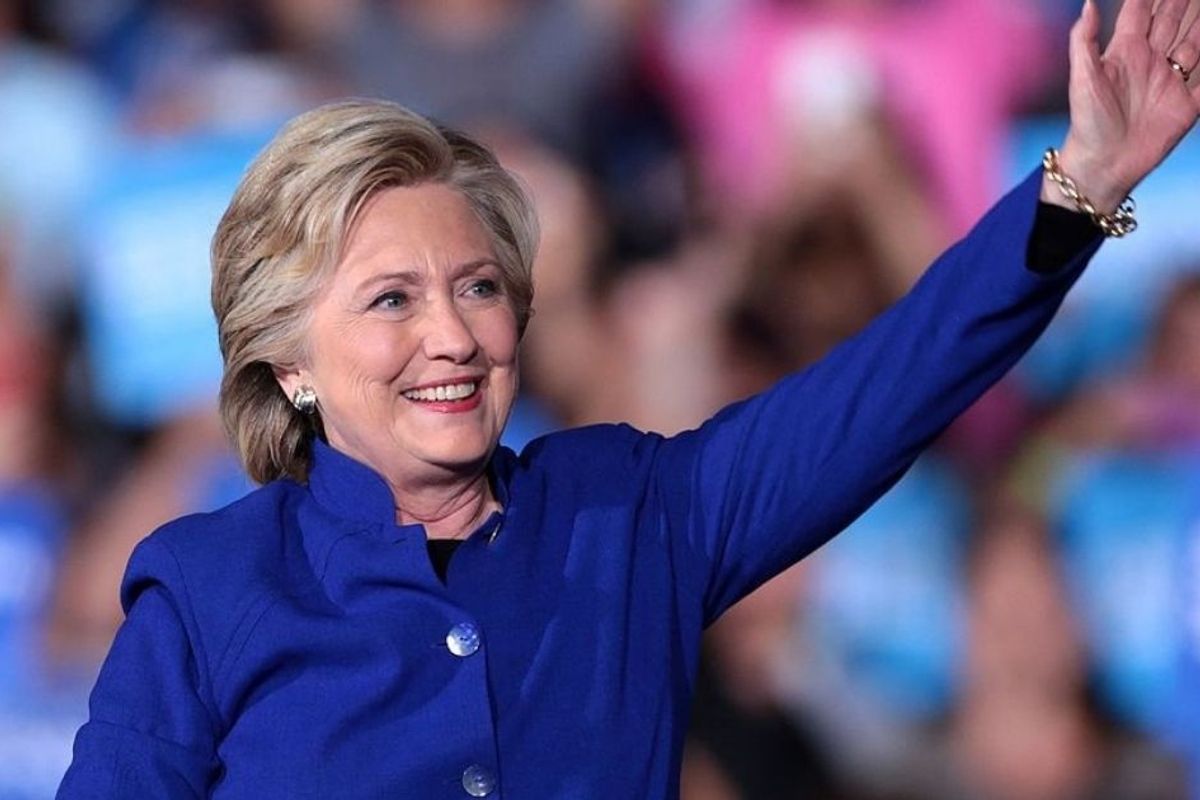 Yesterday I was perusing comments on an Upworthy article about Joe Biden comforting the son of a Parkland shooting victim and immediately had flashbacks to the lead-up of the 2016 election. In describing former vice President Biden, some commenters were using the words "criminal," "corrupt," and "pedophile—exactly the same words people used to describe Hillary Clinton in 2016.

I remember being baffled that so many people were so convinced of Clinton's evil schemes that they genuinely saw the documented serial liar and cheat that she was running against as the lesser of two evils. I mean, sure, if you believe that a career politician had spent years being paid off by powerful people and was trafficking children to suck their blood in her free time, just about anything looks like a better alternative.

But none of that was true.

It's been four years and Hillary Clinton has been found guilty of exactly none of the criminal activity she was being accused of. Trump spent every campaign rally leading chants of "Lock her up!" under the guise that she was going to go to jail after the election. He's been president for nearly four years now, and where is Clinton? Not in jail—she's comfy at home, occasionally trolling Trump on Twitter and doing podcasts.

Every accusation that had any possible truth to it has been investigated by the Trump administration and by Republicans in Congress, and guess what—Clinton has still not been charged or indicted for one damn thing. Why? Because there's nothing there to indict her for.

It's not like she hasn't been investigated thoroughly—by her opponents—for her handling of classified emails and her role in Benghazi and cleared of any wrongdoing. It's not like Trump hasn't had a chance to send the full power of the law enforcement he has at his disposal after her. It's not like there aren't Republicans in power who would love nothing more than to see her behind bars.

But that hasn't happened. If she were guilty of the stuff she's been accused of, she'd be in prison. And she's not.

Yet people persisted like mad in their assertions that she was a criminal.. Now we're seeing same kinds of disinformation campaigns being waged against Joe Biden, mainly through his son, Hunter. And make no mistake, it's a purposeful strategy. Trump's former adviser Steve Bannon succinctly explained that the key to manipulating the media—and by extension, the public—is to "flood the zone with sh*t." You provide a tsunami of junk news, with just enough tiny nuggets of truth that people don't know what to believe, and in such high volumes that wading through it all to try to discern what's true is impossible.

The fact of the matter is that the Hunter Biden stories that have gotten Trumpland all foamy at the mouth have not proven to have news legs. The reporter who wrote it up for The New York Post—a tabloid paper that already didn't have a great journalistic reputation—reportedly refused to put his name on it. But that hasn't stopped people from sharing it like it's gospel truth.

NBC News did a really great in-depth investigative report on the super sketchy origins of the Hunter Biden story, but of course the people who need to read it won't, because they think NBC is fake news. (The number of people who think real journalistic news is "fake news," while simultaneously believing that blatantly biased fringe outlets are real news is baffling. But that's where we are—up is down, left is right, and fiction is "alternative fact" in the disinformation age.)

For what it's worth, The Wall Street Journal—one of the most reputable journalistic news sources out there, and one that can't be accused of being biased to the left due to its right-leaning editorial board—reported yesterday that their review of the documents showed Joe Biden playing no role in the business ventures of his son. And yet the Breitbarts and the Infowars and the other myriad right-wing outlets just keep on running with it, knowing that the actual truth doesn't really matter if people think something is true—or more accurately, if people want to believe it's true.

Of course, disinformation campaigns aren't new, especially on the right-wing side of the aisle. In 2004, John Kerry famously had his Vietnam record smeared by a contrived veteran group that ended up being discredited after he lost the election. In 2008, the whole "birther" movement claiming Obama wasn't born in the United States was pushed by many, including Donald Trump himself, despite the fact that it was ridiculously untrue. The only thing true about it was its racist origin.

But these last two elections, the conspiracy theories and smear campaigns have become more and more heinous. I mean, a Satan-worshiping cabal of pedophile elites? Come on, people. But it makes sense when you think about it. When you have candidate who is on tape saying he "tried to f*ck" a married woman and that he grabs women "by the p*ssy" because they let him, who paid off a porn star he had an affair with when his wife was pregnant with his child, who had to pay $2 million for misusing his charitable foundation's money for personal gain, who had to pay a $25 million settlement to students he defrauded with his "university," who is a billionaire who owes hundreds of millions of dollars and refuses to release his tax returns, and whose campaign and administration have produced indictment after indictment, and more—to make that candidate look remotely acceptable, much less desirable, you have to make his opponent look not just bad, but like evil incarnate.

That's how we've ended up with crap like "Pizzagate" and QAnon boiling up from the dark corners of the internet. If we lived in a normal era, such insane ideas would disintegrate in the light of day, but now we have people in powerful positions—including the president himself—pushing them. And with social media outlets inadvertently amplifying them, getting people to see disinformation for what it is feels like a losing battle.

This is why it's important to bring up Hillary Clinton now, 11 days before an election she's not even a part of. Because the things that people said about her in 2016 were far worse than what people claim about about Biden, and yet after four years, she's not been found guilty of a thing. The only way you can explain that is by creating some kind of elaborate, "deep state" conspiracy, and if you've slipped into that kooky world, you're probably beyond help. But if you're merely unsure or suspicious of what you've heard—which is understandable, considering how much junk information there is to sift through—just think this through. If what had been said about Hillary Clinton were true, wouldn't she be locked up by now?

For the love of all that is good and decent—literally—please don't fall for this garbage again, America. There's far too much at stake.

From Your Site Articles
Related Articles Around the Web
election 2020