What the women who worked to elect Hillary Clinton are doing now. 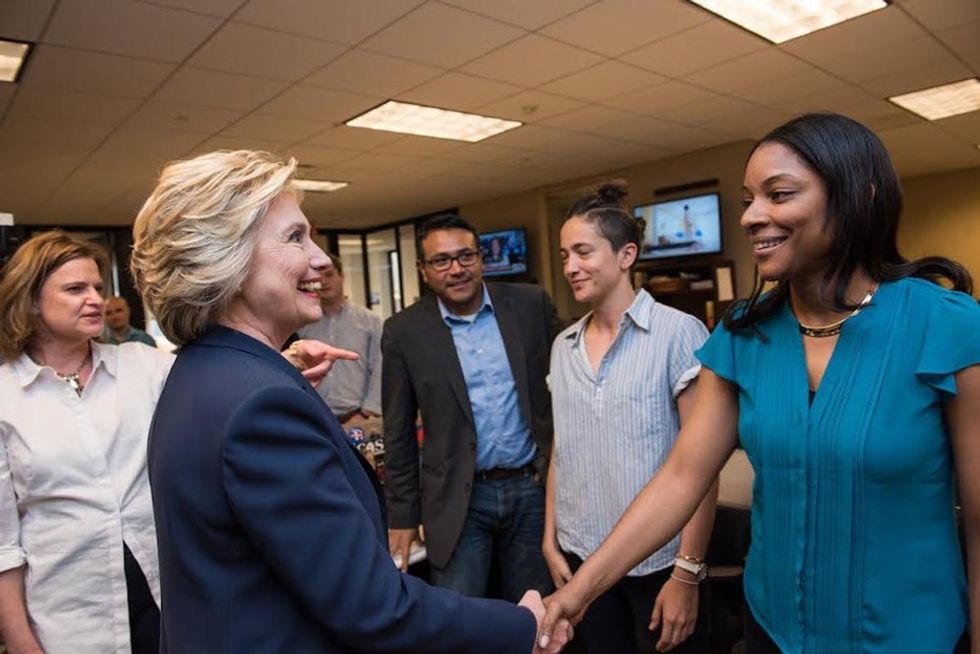 When Clara Spera says she has looked up to Hillary Clinton her entire life, she’s not exaggerating: Clinton visited Spera’s day care when she was a toddler.

Although she didn’t know it at the time, that chance encounter was the start of something for Spera.

Now a student at Harvard Law School, Spera says she knew she had to be a part of Clinton’s campaign last summer. She was working in Paris and was stunned by the Brexit vote result. Her first thought the next morning was “If they can do this ... President Trump.”

Spera got involved through a friend who was working on the campaign and rearranged her schedule so she’d only take classes two days a week. She spent the rest of her week commuting to Brooklyn and working as an intern on the campaign’s voter protection team.

“I felt like it was my duty to do anything I could to try to prevent a Trump presidency,” she says.

Spera is just one of many women who joined the effort to elect Clinton. But who were these women? And why were they so invested in Clinton’s presidential bid?

After sharing a “particularly passionate Facebook rant,” Dayli Vazquez was encouraged to “take it a step further and get involved in the campaign’s grassroots efforts” by friends who were already involved with the Florida Democratic Party. The party eventually offered Vazquez a job as a field organizer.

“I had a theatrical ‘aha!’ moment in which everything was placed in perspective for me and I knew I wouldn’t forgive myself if I turned it down,” she recalls.

LaDavia Drane, who worked as the Clinton campaign’s director of African-American outreach and later as the deputy director of congressional affairs, knew a friend who “was playing a significant role” and “decided to reach out.”

Shola Farber applied for a role at the campaign’s headquarters in Brooklyn. She believes the campaign passed her information along because soon “senior staffers in states across the country” started to recruit her. She eventually served as the regional organizing director for the Michigan Democratic Party.

“When the opportunity arose in Michigan, I knew I could not — in good conscience — decline the offer," Farber says. "Too much was at stake in this election; I felt an obligation to do whatever I could to help Secretary Clinton reach the People’s House. I took on the role with a deep sense of purpose.”

Zerlina Maxwell, on the other hand, randomly received a phone call with a job offer while she was writing for Essence magazine. Maxwell served as the campaign's director of progressive media.

“It didn’t take me a lot of time to say yes. ... I didn’t want to not do everything I could possibly do to help,” she explains.

Their efforts, however, were not rewarded. As the electoral map slowly turned red Nov. 8, their shared dream fell apart.

“The outcome of the election came as a total shock. We were blindsided. It was as though a dear friend or family member had died unexpectedly,” recalls Farber, who was in the conference room of a law office in Southfield, Michigan, on election night.

Vazquez was with a group of volunteers and paid staff at the Ybor, Florida, campaign office for what she thought was going to be a victory party. “None of us were prepared for the outcome,” she says.

Drane, watching from home, says she "felt deeply empty by the end of the night.”

Spera took what she calls “the most expensive cab” of her life back to her parents’ apartment, crying the entire time. She says she went to bed wrapped in a Hillary for America Legal Team sweatshirt, just hoping for a miracle.

The election was over, but the fight was not. Soon after, they got to work.

Vazquez says she has jumped right back into the local political scene, getting involved with numerous Democratic organizations. Drane also picked up another job in politics: She’s working as the chief of staff for U.S. Rep. Yvette Clarke (D-New York).

Maxwell, a political analyst, speaker, and writer, is continuing the work she did before joining the campaign: giving speeches on college campuses about sexual assault and rape culture. Farber co-founded a political consultancy that “brings the best practices of political organizing to the digital world” and is working as a freelance writer.

As for Spera, she’ll clerk for two federal judges in New York once she graduates. “I am mostly angry for now, but I plan to fuel that anger into action,” she says.

Vazquez echoed her sentiments. When asked what advice she’d give to others who have faced a similarly crushing defeat, she says to take the time to grieve, “then get back up and fight like hell.”