Good news: Divorce rates are dropping. The better news is why. 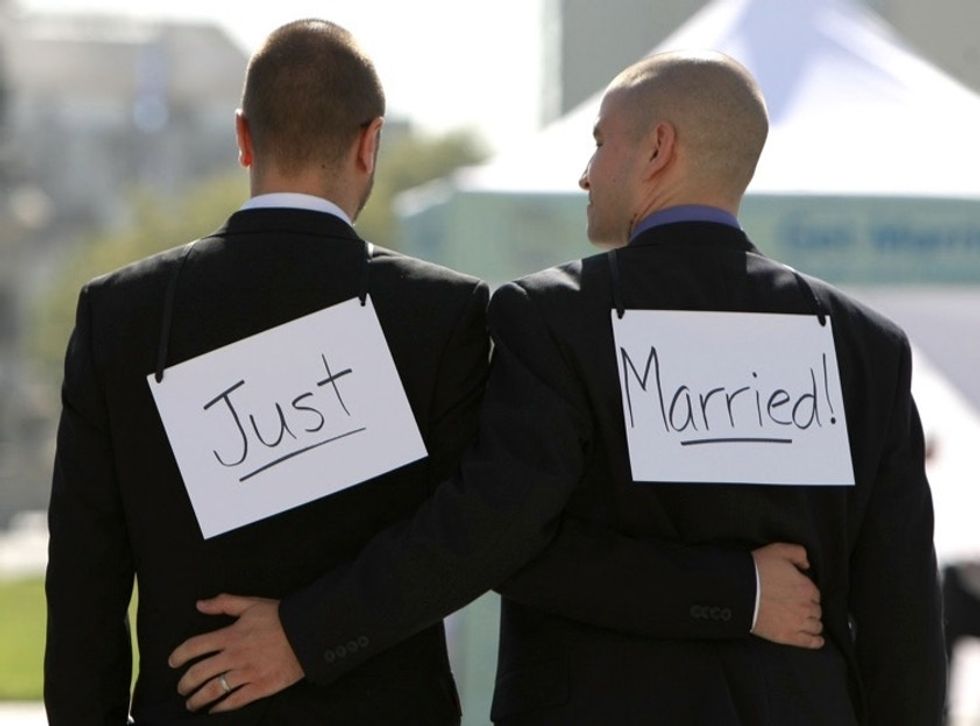 How many times have you heard someone say this?

"Pfft. I'm never getting married. It's all a big scam. Did you know 50% of marriages end in divorce?"

Did you believe that stat? It's OK if you did.

Hell, when "Bennifer" announced their divorce in the summer of 2015, even I was pretty sure there was no hope for the rest of us. (They just seemed so rock solid, you know?)

Like most statistics proudly spouted off by cynical happiness-bashers, there is some truth to that 50% divorce statistic. Or at least there was.

There are many reasons for it, including the fact that fewer people are getting married overall these days. But some of the other reasons for the decline in divorce are pretty inspiring for all the hopeless romantics like me who still long for the fairy tale weddings of our dreams.

These are three main reasons why the divorce rate is dropping: 1) feminism, 2) acceptance, and 3) love.

Also known as three parts of a balanced Upworthy breakfast. (Obviously, the omelette is feminism, the spinach salad is acceptance, and the butter is love.) Photo via iStock.

Feminism: The feminist revolution in the wake of WWII changed things for women, and for marriages.

Data shows that women initiate the majority of divorces, which means a change in divorce-rate is usually reflective of a change in the roles and expectations of women in society.

After the end of World War II, the divorce rate in America hit its highest spike. That's because things were changing for American women in a pretty significant way.

Women had entered the work force to fill roles left behind by the men fighting the war, and they wanted to stay there. They organized and spoke out against a society that treated them as second-class citizens.

The feminist movement of the 1950s and '60s started to crystalize a movement toward equal rights for women. Topics like reproductive rights, domestic violence, equal pay, sexual harassment, and maternity leave all started to enter the national dialogue (and, as we know, all of them were solved immediately and we aren't still having these conversations today, right?).

The role of women permanently shifted in this country as they fought against the idea that their existence was predicated on finding a man to support them. So, they started leaving their unfulfilling marriages behind.

Today, instead of finding someone to marry who can support them and make their dads happy, women are more likely to marry when and if they want to and to spend more time dating or building their own careers before settling down, leading to an increase in marriages of choice, rather than necessity.

Acceptance: Slowly but surely, society came to accept that families come in all different shapes and sizes.

When a sitcom about a divorced, interracially remarried patriarch trying to remain in the life of his daughter and gay son, who himself is raising an adopted Vietnamese daughter with his husband, decided to call itself "Modern Family," it did so for a reason.

In 2016, the American family looks very different from how it looked in 1950.

The signs of this evolution are everywhere: single parents, interracial couples, same-sex marriages, marriages without kids, and couples that stay together happily without ever getting married at all. These concepts aren't seen as completely bonkers as they used to be.

Where marriages were once about dowries and land deals, or more recently about settling down and baby-making, the modern American family is now more about compatibility and choosing the partnership that's right for you.

"Lets never get married or have kids and just spend our lives visiting various seaports!" Photo by Uriel Sinai/Getty Images.

"The fact that most people live together before marrying means that more ill-fated relationships end in breakups instead of divorce. And the growing acceptance of single-parent families has reduced the number of shotgun marriages, which were never the most stable of unions," Stephanie Coontz, a professor at Evergreen State College told The New York Times.

People today are more likely to get married when and if they want to, not because they think they have to. Turns out that leads to healthier, longer lasting marriages.

Love: All of this is to say that people really super love each other in 2016, in ways that previous generations didn't have the luxury of doing.

The biggest reason for the falling divorce rate is the fact that, today, marriages are more likely to be based on actual love and compatibility than ever before.

“We marry to find our soul mate, rather than a good homemaker or a good earner,” economist Justin Wolfers told the Times.

If that sounds eyerollingly obvious to you, consider the fact that marrying for love is a pretty darn recent notion.

"For most of history it was inconceivable that people would choose their mates on the basis of something as fragile and irrational as love," writes author Stephanie Coontz in the first chapter of her book, "Marriage, A History."

Today, marrying for love is considered normal. The only other common reasons are for green cards and to finally have someone to start watching "The Wire" with (which is its own kind of love).

Next time someone tells you that half of marriages end in divorce, tell them they're wrong. And they're being a jerk.

Sure, not all marriages end happily ever after, but our society has opened the door for all kinds of stronger, healthier, happier families, and the falling divorce rate is proof of that.

Whether you want to get married or not, you're part of a more equal, accepting, and loving society. That's pretty awesome.