Finally, marriage equality is coming to Asia. These delightful pics say it all. 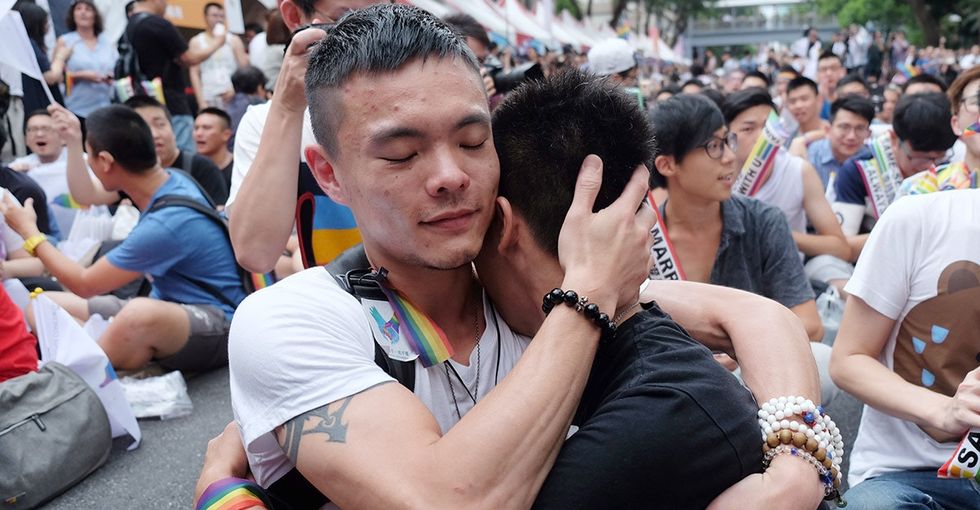 Taiwan is about to become the first country in Asia to legalize same-sex marriage.

On May 24, the island nation's highest court ruled that prohibiting two people from marrying based on their gender is unconstitutional.

The historic decision gives Taiwan's parliament two years to either amend old laws or enact new ones to accommodate for the ruling.

The decision was met with an outpouring of tears, hugs, and cheers from LGBTQ people and their allies in Taipei.

Activist Chi Chia-wei brought a request to Taiwan's highest court, challenging a provision that defined marriage as between a man and woman. Photo by Sam Yeh/AFP/Getty Images.

While the ruling was controversial — with a fair share of demonstrators protesting its potential passing in recent days — Taiwan is one of the most queer-friendly nations in the East. It boasts a large LGBTQ population and the biggest annual gay pride parade on the continent.

The decision's implications for Asia as a whole are nothing short of monumental.

In Asia, LGBTQ rights haven't progressed in the same ways or at the same speed as other regions of the world; some Asian countries are even going backward.

This week, for the first time ever, two men in Indonesia's conservative province of Aceh were caught practicing gay sex and caned 83 times each in front of a packed town square as a consequence. While most of Indonesia doesn't ban gay sex outright, Aceh adheres to Sharia.

On the same day that Taiwan's court ruled in favor of marriage equality, South Korea's military court sentenced a captain to prison for breaking its controversial "sodomy" ban — a measure Amnesty International has blasted as “a bigoted hunt to root out gay personnel.” In most Asian countries, including Japan and China, very few (if any) legislative steps have been taken to protect LGBTQ people as a marginalized minority.

Taiwan's court ruling wasn't just another inevitable step toward equality — it actively rejected the forces of a bigger regional trend chipping away at LGBTQ human rights.

“In Asia, every country’s situation is different,” victorious activist Chi Chia-wei, who brought one of two petitions to the highest court, told the New York Times. “But this should certainly offer some encouragement to different societies to consider following in Taiwan’s footsteps and giving gays and lesbians the right to marry.”