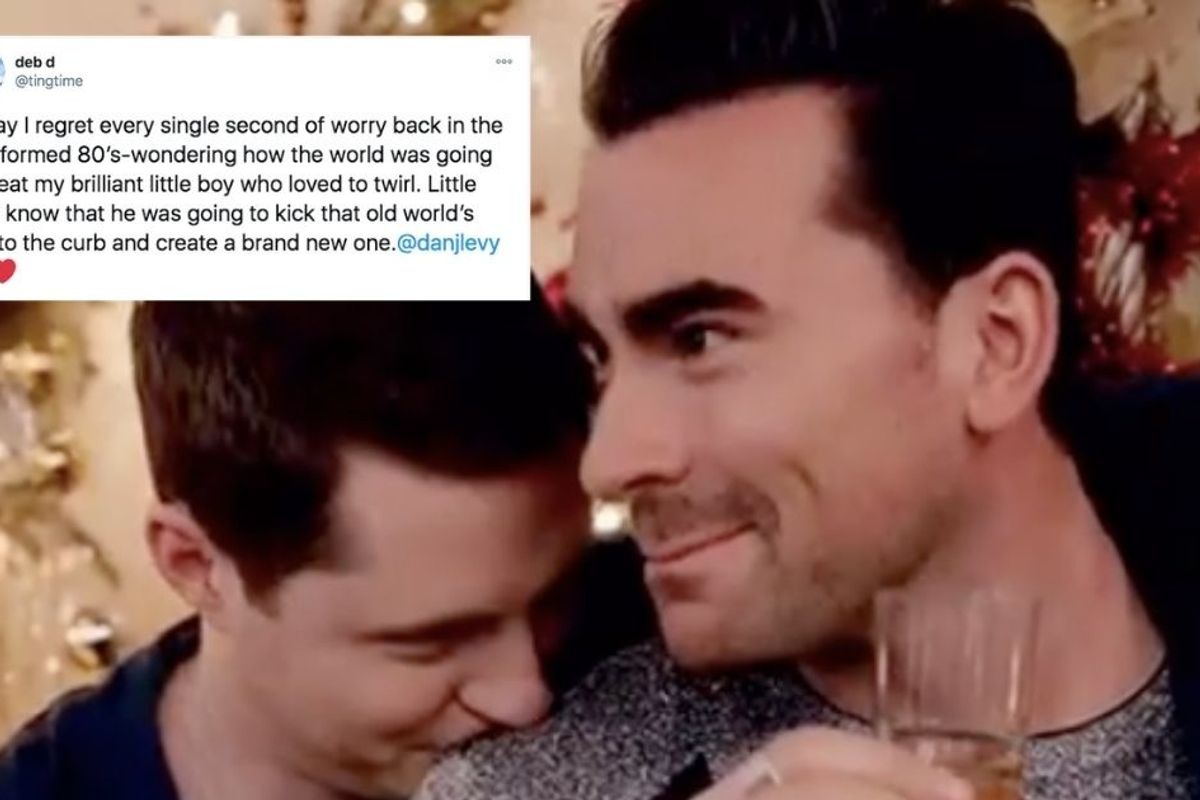 The world has come a long way in the past few decades when it comes to acceptance of people in the LGBTQ+ community. Those of us who grew up in pre-millennial generations remember a very different time, when hiding one's sexual orientation or identity was the norm, homophobic jokes barely batted an eye, and seeing someone living an "out and proud" life was far less common than it is today.

That was the world Dan Levy grew up in. The Schitt's Creek actor and co-creator was born in 1983, and on the day of the series finale of Schitt's Creek, his mom Deborah Divine shared a tweet that perfectly encapsulates not only the changes we've seen in society since then, but the impact Levy himself has had on that world.

"Today I regret every single second of worry back in the uninformed 80's-wondering how the world was going to treat my brilliant little boy who loved to twirl. Little did I know that he was going to kick that old world's ass to the curb and create a brand new one."

It's difficult to measure the mark Dan Levy (and family) made with the hit TV show Schitt's Creek, but it's significant. It's not like we hadn't seen LGBTQ+ representation on television before—we just hadn't seen it quite like this. In most shows with LGBTQ+ characters, their identity was either a conflict or a punchline, as were people's reactions to them. Generally speaking, homophobia has dominated the storyline of such characters, whether it played out in comedy or drama.

In Schitt's Creek, Levy created a world where there was no homophobia. It just didn't exist amongst the characters in the show. The closest we came to seeing it was when Patrick was worried about how his parents would react to finding out he had a boyfriend, but that turned out to be a momentary fear that was immediately squelched by his parents' unreserved acceptance.

The rest of the time, all we saw in the town of Schitt's Creek was an embracing of the characters for who they were, quirky outfits notwithstanding. What we experienced in that world was an example of what the world could be.

And it was done with simple storytelling. The romcom sweetness David and Patrick's relationship from "meet cute" to marriage was something we've rarely seen with a same-sex couple on screen. Honestly, the joyful normalness of it all probably did more to help people understand and accept gay relationships than most overt activism ever could. Activism is important for advocating for rights and justice, but those battles are a lot easier to fight when people's hearts are on your side. And people's hearts are what Dan Levy has played a role in changing most.

He comes by it honestly. In a speech for GLAAD last year, Levy said that his family's unconditional love and support—as exemplified by his mom's tweet—were what made him feel safe to come out at 18.

Dan Levy reflects on creating Schitt's Creek, “A place where everybody fits in." youtu.be

"Had I not had the love to give me a sense of security, I don't know if I would have found my way out of the closet, let alone create the opportunity for myself to tell stories on television that have effected some kind of positive change in the world," he said. "Support, encouragement and love: three relatively simple acts of kindness that can change the course of a person's life."

For six seasons, Levy showed us a world where everyone embraces those three simple acts of kindness, so everyone is safe. What a wonderful world that turned out to be for all of us.