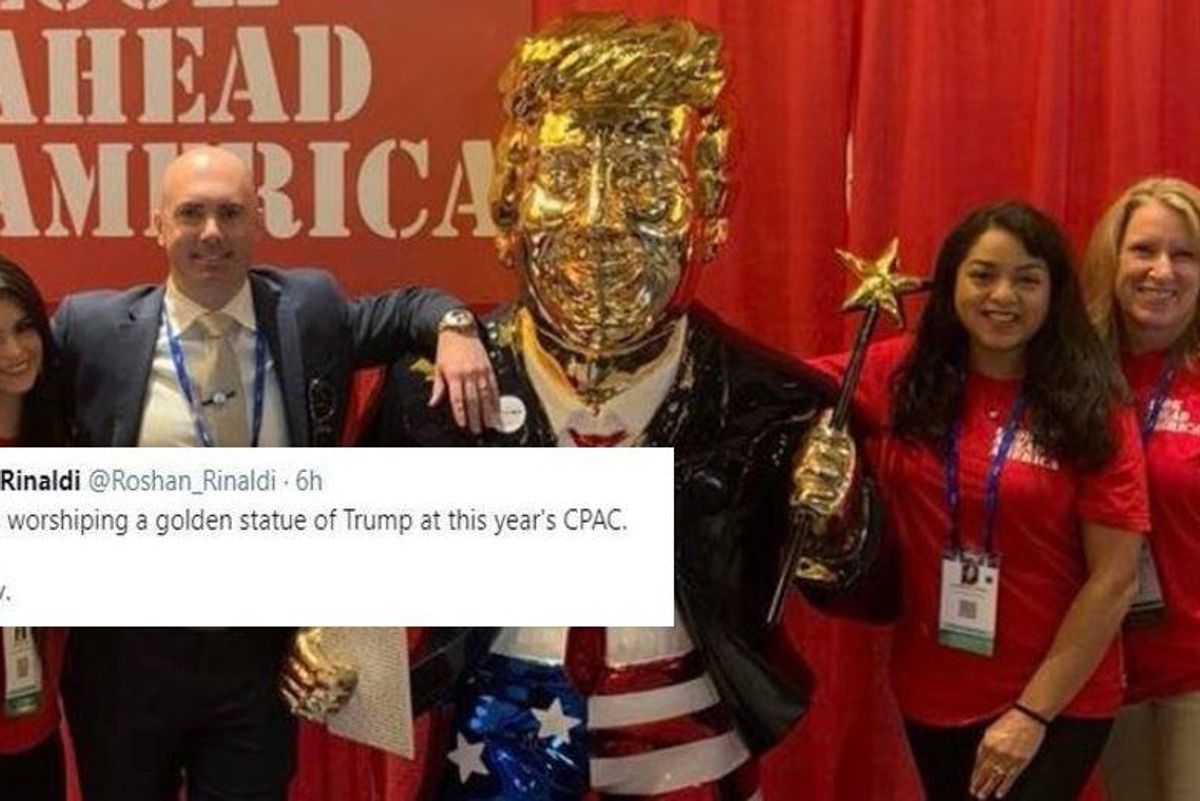 It was also marked by anti-mask protests. Early on Friday organizers were booed and met with chants of "Freedom!" when they asked that attendees abide by the Hyatt's policies and wear masks.

"I know this might sound like a little bit of a downer, but we also believe in property rights, and this is a private hotel," said Dan Schneider, executive director of the American Conservative Union, which runs CPAC. "And we believe in the rule of law, so we need to comply with the laws of this county that we're in. But a private hotel, just like your house, gets to set its own rules."

But the image that best sums up the conference, and the state of the Republican party in 2021, was the unveiling of a massive golden Donald Trump statue featured in one of the ballrooms. The golden statue depicts Trump in a suit with his trademark red tie, American flag swimsuit, and sandals. Classy.

Many have said the Republican Party has essentially become a cult of personality revolving around Trump over the past four years. But spelling it out with a golden idol of the man really puts a button on things.

According to a January poll, 74% of Republicans want Trump to stay active in the party in some way, including 48% who want him to remain its head.

It's amazing that he still garners such support after being impeached for the second time for inciting a violent mob that ransacked the Capitol building. Clearly, these people favor party over country.

The blind loyalty is also questionable being that even though he won the presidency in 2016, over the next four years, the GOP would lose the House, Senate, and the presidency.

After the insurgency at the Capitol building over 30,000 U.S. voters who were registered as Republicans changed their party affiliation.

The image of the golden Trump also drew many comparisons to the biblical story of the Golden Calf.

As the parable goes, the Israelites lost faith in Moses when he left them for 40 days and 40 nights. So, they pooled their gold to create a golden calf to worship. When Moses returned to the group, he burnt the golden calf in a fire, ground it to powder, scattered it on water, and forced the Israelites to drink it.

Could it be that the Republicans lost their faith in their beliefs and, instead, were led astray by the Golden Calf that is Trump?

It seems The golden statue of Trump at the CPAC sums up their devotion to their”Chosen One”! Just like in the Bible… https://t.co/BzRwoagPe2
— Nina Thomason (@Nina Thomason)1614319512.0

They are worshiping a golden statue of Trump at this year's CPAC. Seriously. https://t.co/Wyam5jthn9
— Roshan Rinaldi (@Roshan Rinaldi)1614349972.0

Seeing that hideous golden statue of Trump at the CPAC convention brought to my mind that scene with the Golden Cal… https://t.co/ACJRdf0kuw
— Mr. Naturalism (@Mr. Naturalism)1614324504.0

Evangelicals: Those silly Israelites. Why would any bow down to a golden calf?? *Golden Trump statue arrives at CPA… https://t.co/tOQWkKg3R3
— Braden Pace (@Braden Pace)1614343874.0

@OEimhear Ummm. Where is Marco Rubio when we need a bible verse about Worshiping the Golden Calf?
— Jackson (@Jackson)1614362409.0