Climate change could change what we eat. It’s already happening in Africa. 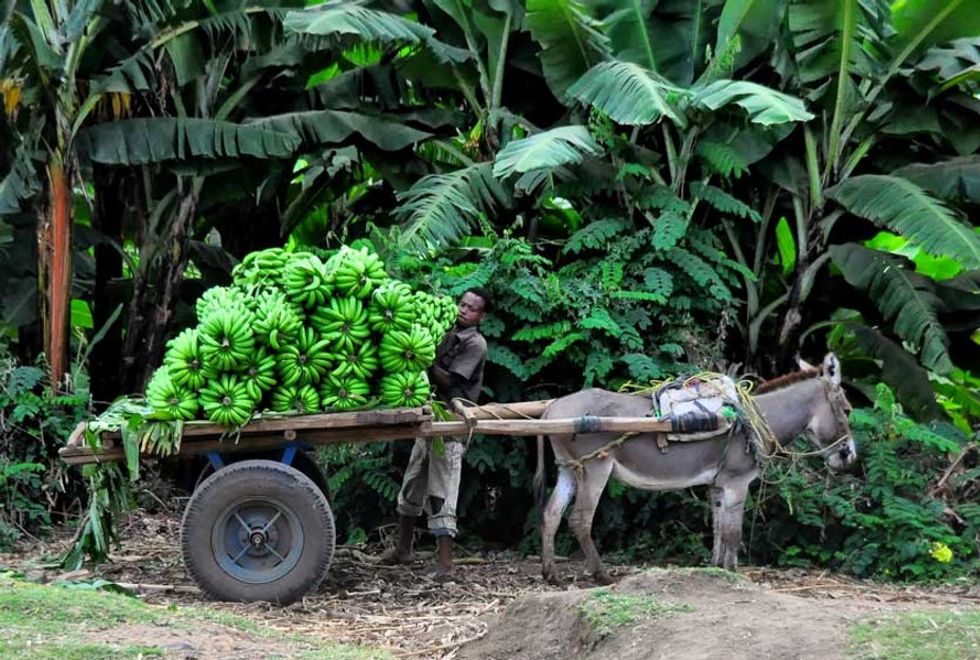 If your livelihood depends on crops, which need water, and there isn’t any water ... what do you do?

Borrie Erasmus struggled with this very problem just this year in South Africa.

His family has lived on the same farmland for 50 years. It usually rains between October and April in the region, but in 2015, El Nino weather patterns caused a drought that lasted through late February of 2016.

“On our farm, there has never been a time when there has not been any maize in December,” Erasmus told Aljazeera. “We could not even try planting seeds. It has been drier than ever.”

‌Weeds grow in a maize field in Malawi, which is one of the areas affected by drought earlier this year. Image by Andrew Renneisen/Getty Images.‌

Over the last 40 years, Africa has suffered seven major droughts like this one that have dramatically affected food supply, crops, and livestock.

Philip Tioko, a villager in the northwestern Turkana region of Kenya, told the Washington Post that he lost all his livestock — including some 200 goats — in the span of just 20 years after repeated droughts dried up the rivers and caused the nearby lake, Lake Turkana, to recede. Now he survives by fishing, but even the number of fish are dwindling as water levels continue to fall.

These dangerous droughts are likely to become more common if trends in climate change play out as predicted by scientific studies.

Many of the world’s important food crops, as well as its livestock, are sensitive to changes in temperature and rainfall. Many simply won’t be able to survive in certain regions if it gets too hot or too dry. This problem will affect what local farmers can grow across the globe, as well as their everyday diets — especially when they rely on what they farm in order to eat.

‌A man cuts what is left of his yield to feed his livestock in Lesotho after a year-long drought devastated crops in the region this year. Image by John Wessels/AFP/Getty Images.‌

The good news is, people around the world are already starting to figure out ways to adapt their diets to the changing climate. To see some of the changes a warming world has had and will have on how people eat, take a look at Africa.

Here are five ways climate change could affect how Africa — and the world — will eat in the next century:

Maize — a type of corn — has become an important staple food throughout the African continent over the last century. It's actually a pretty popular food all over: It’s the world’s third most important cereal crop (after rice and wheat).

A woman prepares the maize she raised inside her hut in Malawi. Photo by Kate Holt/Africa Practice/Flickr

‌In Africa, maize is often eaten by itself — roasted over a fire — or it is featured as a prominent ingredient in a lot of local dishes, such as the common mealtime starch ugali (a thick, stiff porridge) or the popular Kenyan githeri stew.

However, according to a study published in the scientific journal Nature, as much as 41% of the land in Africa devoted to growing maize could stop being productive by 2050.

Maize isn’t the only crop in trouble. Beans, bananas, barley, and wheat are just a few of the crops that could all struggle to grow because of climate change in certain regions of the world. This means that these foods might become less prominent in local diets, or they will need to be imported.

In Africa, the effects could be profound for local farmers. According to the study in Nature, 60% of bean agriculture and 30% of land currently cultivated for bananas could stop being productive.

‌A man loads his cart with millet near the village of Simiri in Niger, Africa. Image by Boureima Hama/AFP/Getty Images.‌

If some crops won’t grow where they used to, local farmers will need to grow something else in order to survive.

In Africa, this could me

an that farmers grow varieties of millet or sorghum instead. Both of these grains are actually native to Africa — unlike maize — and they are expected to maintain their production levels in the region despite climate change through 2100 because they are more resilient to drought. (Red millet also makes for a delicious and nutritious substitute to maize in ugali.)

If it becomes too difficult to grow certain crops, some farmers might swap crop agriculture for livestock farming. Other farmers might change what animals they raise entirely.

In Kenya, camel rearing is catching up with cattle farming, reports Reuters News, because camels can withstand drought situations better than other animals.

While cows (and goats) require daily access to water and pasture, camels can survive without food or water for up to three weeks because their hump stores fluids to keep them hydrated.

‌A man drying cowpeas in Ghana. Cowpeas grow in dry areas because they are able to survive high temperatures with little water. Image by Tree Aid/Flickr.‌

Several organizations, including the World Food Programme, are working to help local farmers in Africa become more resilient to climate change and “climate shocks” — like droughts — by diversifying what they grow. Instead of growing just one crop, farmers grow a variety so that even if one crop dies, others might survive.

Grain legumes, such as cowpeas, are often a great choice for this in Africa. These legumes are more drought-resistant, can provide protein, and they can even help restore the farmer’s soil because their roots "fix" nitrogen from the air, which then helps grow future crops. The stems and stalks of these plants can also be used to feed livestock.

While it is true that climate change could cause certain crops to disappear altogether, scientists, organizations, and farmers are working hard together to adapt and prepare for the future. It might just change what foods we all eat.