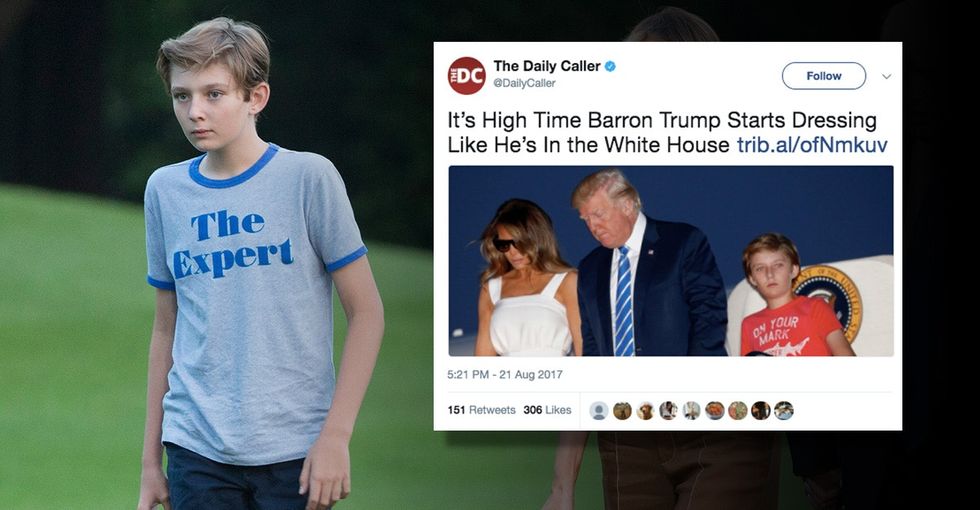 It's not often that the Tucker Carlson-founded Daily Caller criticizes President Trump, but that changed on Monday when the site went after his son.

No, not Eric. Not Don Jr., either. The Daily Caller had a bone to pick with Trump's youngest son, Barron.

Of all the things to raise the conservative outlet's hackles, it wasn't the president's coddling of white supremacists, his failure to enact any major pillars of policy, or his snap decision to ban an entire population group from the military — but rather the fact that his 11-year-old son wears T-shirts and shorts on summer vacation.

To that, I have to ask: Are we still f-ing doing this?

In this photo from June, Barron wears jeans and a T-shirt. You know, like regular kids wear. Photo by Chris Kleponis-Pool/Getty Images.

The article, "It’s High Time Barron Trump Starts Dressing Like He’s In the White House" by Ford Springer, lambasted the youngest Trump for looking "like he was hopping on Air Force One for a trip to the movie theater" in a photo of the family returning from a recent trip. (The article also refers to President Trump, he of the ill-fitting suits and cartoonishly long ties, as "dapper" — so maybe Springer isn't the best qualified person to write about fashion? Sigh.)

It was just a few months ago that we were all reminded that presidential children are off-limits.

When a "Saturday Night Live" writer made an insensitive joke about Barron Trump, the White House responded, news outlets (including the Daily Caller) covered it, and the writer was eventually suspended (again, covered in detail by the Daily Caller, so they definitely know that the whole "criticizing presidents' kids" is a big no-no, right?). So why would the Daily Caller criticize Barron, and why would they do it now? Maybe it's for the sake of consistency since they regularly targeted Sasha and Malia Obama?

Why are you doing the same thing you slammed others for doing, Daily Caller? Let's at least agree to leave Barron and future presidents' children out of it. GIF from "Saturday Night Live."

Respecting the privacy of the president's children — especially those who are underage — isn't a new concept. Back in January, Chelsea Clinton stood up for Barron after he received a barrage of hate and criticism around the time of the inauguration, writing, "Barron Trump deserves the chance every child does — to be a kid."

In response to the Daily Caller article, the former first daughter again came to Barron's defense.

It's high time the media & everyone leave Barron Trump alone & let him have the private childhood he deserves https://t.co/Wxq51TvgDX
— Chelsea Clinton (@Chelsea Clinton)1503359985.0

There's a lot to criticize about Donald Trump, but no matter how you feel about him, leave his 11-year-old kid out of it. Barron didn't choose what family to be born into, and he shouldn't have to meet some arbitrary standards set by a complete stranger in the media. Growing up is tough enough as it is without having the world watching your every move, so let's all agree to cut Barron some slack.

OK, it was about Britney Spears, but you get the idea. GIF from Chris Crocker.